The anti-Israel, anti-Conservative bias at the Canadian Broadcasting Corporation has been one of the hallmarks of our tax-supported national media network.

The Ceeb goes to pains to protest a professed even-handedness, and sometimes, on rare occasion, they may actually present a news item that isn't overwhelmingly slanted in a neo-socialist, regressive direction.

But their protestations are being undermined by their friends. The anti-Semitic Canadian Islamic Congress, whose founding President notoriously pronounced that all Israeli Jews are fair targets for murder, is crowing about the bias at the CBC in favour of the Sea Hitler flotilla that attempted to break Israel's arms embargo against Gaza. 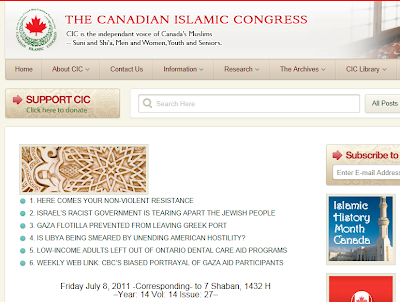 In a link on the Canadian Islamic Congress' website, they have an item " CBC’S BIASED PORTRAYAL OF GAZA AID PARTICIPANTS"

Could it be that the CIC was referring to one of the rare instances when the CBC wasn't portraying Israeli defensive measures against Palestinian and Iranian terrorism as some sort of modern day imperialism? 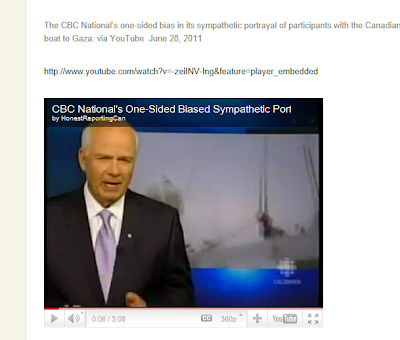 The bias they were talking about was the CBC National’s one-sided bias in its sympathetic portrayal of participants with the Canadian boat to Gaza.

Things are bad when they've gotten to the point when the Canadian Islamic Congress is prepared to publicize bias in their favour!


Here's the CBC report the CIC endorses as being biased against Israel:

The CBC has been Pro Islamic for the last decade and it ( CBC ) is becoming more Anti_Canadian.They don,t even try to hide it anymore.
It is very sickening to see their Bias every time.
They are now being controlled by outside forces (THOSE WHO ARE THE ENEMY OF FREE SPEECH,FREEDOM AND EVERYTHING THAT IS NOT ISLAMIC ) Not A Canadian Corporation Any more, it,s Just The Name Now.