The radical socialist movement in Canada frequently veers into vociferous anti-Semitism. Under the guise of "Palestinian solidarity activism" socialists vent their Jew-hatred while betraying principles of equality in their alliances with groups that support regimes that repress women and persecute Gays. One such example is the unholy axis of James Clark's Canadian Peace Alliance and Zafar Bangash and CASMO, who act as advocates for the totalitarian, anti-Semitic, Holocaust-denying Iranian theocracy.

One of the clearing-houses for this bigotry is run by the spouse of NDP leadership hopeful, Libby Davies. Rabble.ca is published by Kim Elliott, Davies' spouse. Its discussion forums are tightly controlled and users are frequently banned for defending Israel or criticizing unions. Indeed, rabble.ca's paid moderators sometimes use the discussion forums to promote Davies.  But one type of behaviour that is fostered there is calling Israel a "Nazi" country. This type of attempt to paint a liberal, democratic Jewish state with a free press and independent judiciary as a genocidal monster is one of the new forms of anti-Semitism identified by the Canadian Parliamentary Commission on Anti-Semitism. 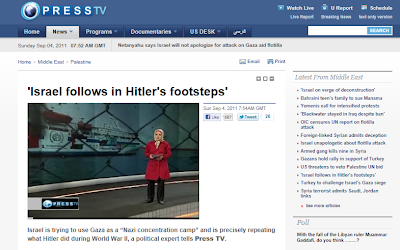 It is little surprise that this type of hatred and bigotry would be associated with supporters of Libby Davies, who recently boasted about her association with a member of European Parliament who was tried for promoting anti-Semitism in France. Rabble's user forums, which have included the anti-Semitic invective directed at SUN TV host Michael Coren as a "damped Jew" now has a regular poster using Iranian propaganda to demonize Israel as following "in Hitler's footsteps." The anti-Semitic propaganda he promotes makes the absurd accusation that Israel is "using Gaza as a Nazi concentration camp."

Davies frequently appears at rabble.ca-sponsored events and that venue provides insight into the sort of attitude that Canadians can expect to see fostered in the NDP if she and her camp of radicals continue to gain influence in that political party. By making both Davies and the pragmatic, intelligent Thomas Mulcair both Deputy Leaders, the NDP's shrewd former leader, Jack Layton, played radical and mainstream elements of the party against each other to consolidate his control. But now that Layton is gone and no leader has emerged with a semblance of his authority in his party, the NDP could easily descend into a fanatical, hate-mongering political movement dominated by obtuse ideologues like Davies.

Wow. Libby Davies is so fat, they have to issue a tsunami warning whenever she bellyflops into the Pacific.

Please, disagree with their opinions and actions, but lets stay away from personal attacks and attacks on a person's appearance. That's what the other side does, and we don't need to lower ourselves to their level when their policies give us plenty to work with.