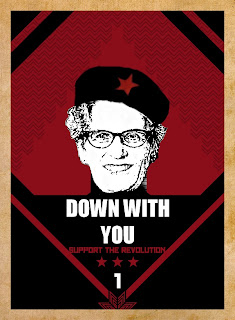 Pick the Ontario politician who believes in democracy and the one who does not:

Ontario's Premier, who leads the province, not because she ever won a general election but because she was selected by delegates of the Liberal Party of Ontario, is prepared to "intervene if necessary" in Toronto's municipal affairs.

Embattled Mayor Rob Ford is the subject of unproven allegations of cocaine use by the Toronto Star.

Wynne, who lied about her government's corrupt use of public funds for political purposes related to gas plant cancellations, and is now accused of illegally trying to that cover up, should consider tendering her own resignation.

Toronto Mayor Rob Ford has said he is willing to put his leadership to the test by having an election.

Between Ford and Wynne, which of the two actually has any democratic validity?
Posted by Richard K at 4:31 PM

"Toronto Mayor Rob Ford has said he is willing to put his leadership to the test by having an election." Yeah, they said that on Saturday but come Monday he didn't resign to make way for a by-election. The only way Ford will leave before October 2014 is if he ODs or dies of a heart attack (or both). As one of his ex-staffers said: “We don’t want to wake up in a week and find him dead in a ditch knowing we could have done something to stop this…. He resigns as mayor or he’s dead in a ditch—I don’t know what’s first, honestly.”

Who gives a shit if Ford is "willing to put his leadership to the test by having an election?"

That's the beauty of fixed election date laws. It precludes political types from manipulating democracy to serve their interests. Unless you're Stephen Harper and just ignore the law that you yourself championed and passed.

Your new anonymous buddy does make a good point. Ford could have an election anytime he wants one. All he has to do is resign and declare himself a candidate in a by-election.

Now, I was against a by-election when it looked like he was going to be removed for violating the law this past fall and I'm against one now. I have no interest in wasting seven to ten million dollars to feeds Rob Ford's retarded ego, regardless of the circumstances.

But the fact remains that if he wants an election, he can have one any time he wants by resigning. He won't because he's lying.

We`ll have to see what happens in that regard.

If I were Ford, I`d do just that, assuming it`s legal and he could run again in the by-election, which I imagine would be the case. Would want to get my ducks in order first and remember, this new round of idiocy only began a little over a week ago, so I wouldn`t rule the scenario out entirely just yet.

He may say that since the next scheduled election is only about a year and a half away, and as he`s all about not wasting tax dollars, he`ll leave it till then.

I`m not Ford`s strategist, although I have noticed Doug used some of these same talking points in this post, which I published an hour or so before he gave his statement to the press.

And no, I don`t seriously think anyone at City Hall is mining my blog for strategy.

Oh, it's legal. We learned that in the Municipal Conflict of Interest case. And I howled like a lunatic at the prospect of it.

But then, as now, the brothers Ford are fucking lying.

Yes, Council could appoint an interim mayor to complete Ford's term (which I supported in public last fall,) but it might not. There very well could be a by-election.

The only way to find out is through resignation. But Rob and his shithead brother, who's especially keen on all of this election talk, refuse to pull the trigger. And that's telling.

This nonsensical "democracy" talking point is nothing more than a tactic to manipulate morons unless and until the Fords - and their supporters - are willing to do the one thing that would guarantee it on the table: resignation.

And I'd be very surprised if they do that. If there's a sudden 60 day writ, as opposed a full campaign year, Ford couldn't count on a dozen liberals dividing their own vote, pretty much opening the field to Olivia Chow, who I think could beat him. And in a snap election, there's the very real possibility that John Tory jumps in.

Think I'm wrong? Consider why Arnold Schwarzenegger refused to subject himself to a Republican primary in 2002, but ran in the 90 day recall election the following year.

You can extrapolate from his 37% approval rating that Ford can only win against a divided Left. He'd lose in a head to head race with almost anyone. A snap election drives out candidates on the left who don't have money or organization right now, which is pretty much anyone that isn't Chow. If a zillion socialists don't run, Ford loses.

And if I know that, it's a pretty safe bet that Ford's political people do.

Also, we're going into week three of this story now, and it's pretty clear that they're playing the Nixon-Clinton hunker down move. All this talk of elections is just more Ford bullshit.

By the way, it doesn't matter if Ford stays in office or not. He's already been destroyed for close to two years. His credibility with Council is close to zero and he really hasn't done anything after his first six months in office. In fact, the only solid ally the brothers Ford have is a brain damaged mess like "Gino Boy" Mammolitti.

Having said that, I'd consider strategizing for Ford's re-election. They can pay me with cocaine. I like cocaine.