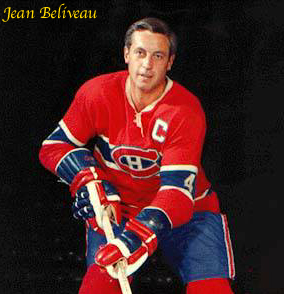 I used to watch Jean Beliveau play hockey when I was a kid and has a photo that he had signed himself, which he mailed in response to a letter I wrote when I was 8 years old, taped up on my bedroom wall.

Beliveau was the anchor of what may have been the greatest line-up of the greatest hockey dynasty, having succeeded the legendary Maurice "Rocket" Richard as the Montreal Canadiens' captain.

On and off the ice, Jean Beliveau was a class act.

This is from Dave Stubbs at The Montreal Gazzette:

He was 83 years old.
Béliveau leaves his wife and soulmate of 61 years, Élise; the couple’s daughter, Hélène; and granddaughters Mylène and Magalie.
They are joined in mourning by the hockey universe and countless people around the world whose lives have been indelibly touched and profoundly enriched by the man who affectionately was nicknamed Gros Bill.
Béliveau had been in delicate health in recent months, having fought pneumonia from August into September not long after having fractured a hip in a fall at home.
He had suffered strokes in 2010 and 2012, a decade after having waged a difficult battle with cancer in 2000.
“I knocked on the door,” Béliveau philosophically said two years ago, in conversation while recovering at home from his second stroke. “But it seems they weren’t ready for me.”
The richly decorated Hall of Famer compiled athletic achievements that were the gold standard, matched only by his elegance and his lifelong charity and humanitarian work off the ice.
Beliveau’s dazzling statistics installed him in the hockey shrine in 1972 alongside his great friend and rival Gordie Howe of the Detroit Red Wings, with the customary three-year post-retirement period to induct players being waived.
Béliveau won 10 Stanley Cups during his 18 seasons with the Canadiens, having arrived from Quebec City in 1953 from the semi-professional senior-league Quebec Aces as a long-courted superstar-in-the-making...