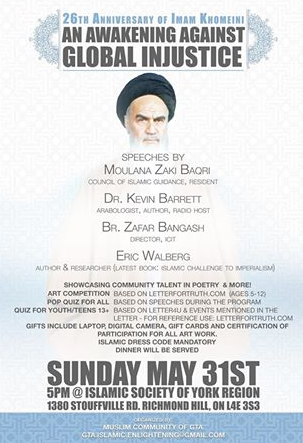 Emotions are running high in the lead-up to a planned protest outside the Islamic Centre of York Region in Richmond Hill this weekend.

Organizers say hundreds of Iranian and Jewish Canadians and politicians will converge on Stouffville Sideroad in front of the Islamic Society of York Region to protest an event honouring the life and deeds of Ayatollah Khomeini.

“I am deeply saddened and disappointed that the commemoration of the 26th anniversary of Ayatollah Khomeini's death and his brutal dictatorship is taking place in Richmond Hill, Ontario,” said Reza Moridi, Richmond Hill MPP and Canada’s first Iranian-Canadian  provincial minister.

Moridi is one of several provincial and federal politicians expected to attend the protest Sunday afternoon.

“While freedom of assembly is the right of every citizen in our nation, I condemn the celebration of an individual that was responsible for the heinous deaths of hundreds of thousands of innocent people in Iran,” Moridi said.

Khomeini, founder of the Islamic Republic in Iran, is recognized as having authorized the execution of thousands of political prisoners, the systematic torture, imprisonment and murder of political dissidents and the hostage-taking of 52 American diplomats....

...A group calling itself the Muslim Community of GTA will be hosting the event, An Awakening Against Global Injustice.

Zafar Bangash, head of the Islamic Society of York Region and director of the Institute of Contemporary Islamic Thought,  said 3-400 people are expected to take part, listening to speeches by “world renowned” speakers, panel discussions, and poetry, art and quiz competitions.

Bangash compared the event to others that honour good work done by heroes like Martin Luther King and Ghandi.

“It will be a reminder to us there is still a lot of injustice in the world and to see [Khomeini’s] contribution in trying to remove injustice.”

But Jason Kenney, Canada’s defence minister and another politician expected to attend the protest, sees it differently. He voiced his concern via social media last week:

“Disturbing to see anyone in Canada celebrating the murderous depravity of Ayatollah Khomeini's brutal dictatorship.”...

This might be an opportune moment to note that Zafar Bangash is the fanatic that Omar Khadr's lawyer Dennis Edney was going to put in charge of his convicted terrorist client's "spiritual counselling." Great. That makes me feel safer.