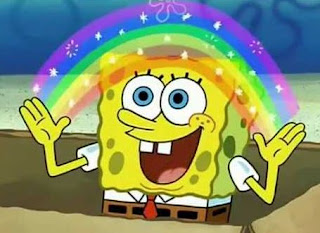 From my extensive SpongeBob viewing, I don't recall sex of any sort in that cartoon series.

But at this point, I have a confession to make: I'm not really sure of any aspect of the sex lives of sponges.


...According to Fox News, a law enforcement source said: 'It is no coincidence that this happened in Orlando. Mateen was enrolled in (Robertson's online) Fundamental Islamic Knowledge Seminary.'

Robertson, who was a former US Marine and undercover FBI agent before turning into a radical Imam, has previously been allowed into Britain, and preached at the Green Lane mosque in Small Heath, Birmingham, in 2010 - despite his violent criminal background, according to The Sun.

Many British ISIS fighters have described him as an inspiration, while videos of his lectures posted online show him rail against homosexuals and describe cartoon character SpongeBob SquarePants, as gay and a means to promote homosexuality to children...