Toronto's Pride Festival Weekend, which this year happened to begin on the last day of Ramadan, provided a serendipitous affront to the grubby Shiite fanatics marching down Toronto's University Avenue last Saturday afternoon to hurl speeches full of fury and bile towards the US Consulate. 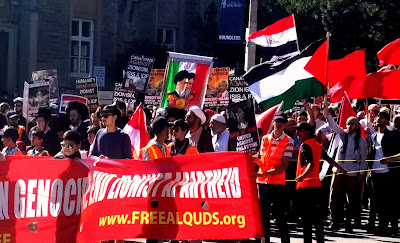 It was, again, al Quds Day, the holiday of hatred created by Iran's despotic Ayatollah Khomeini that serves as a call to annihilate Israel's Jewish population and condemn Israel's principal ally, the United States. But this year, because of the convergence of Pride and Ramadan, the Islamist mob was greeted by a huge gay rainbow banner that covered a large section of the consulate's facade.  The Iranian regime deplores gays and mercilessly murders them. Acolytes of Iran's mullahs, traditionally led at the Toronto al Quds rally by hatemongers Zafar Bangash, a vicious local Imam, and Ali Mallah, a sleazy activist who is a denizen of Islamist and radical leftist organizations, faithfully support the tyrannical Iranian regime and its genocidal policies. But in Canada and the US, gay people can celebrate their sexuality and live as full equals, and the symbol of that equality, hanging from that edifice of the hated Americans, was a veritable spit-in-the-eye to the Khomeinist rabble.

Before marching, they had gathered for speeches at the north side of Queen's Park, since the south grounds in front of the legislature have become off-limits to the annual Khomeinist jamboree, following numerous complaints from the public. The al Quds Day supporters were about a thousand, much smaller than in previous years, and it was, with the exception of less than a dozen people, made up of Muslim zealots, the men looking like they had been transported out of Iranian and Pakistani madrassahs, segregated from the women, who were a mass of flabby blobs wrapped in chadors and hijabs.

Al Quds Day serves as a reminder that Canada needs to do a great deal more to strengthen its immigration policies. Its crowds are a demonstration of Canada's failure to weed out the human garbage who carry banners of Khomeini and Iran's current Supreme Leader, Ali Khameini, indicating their devotion to rulers who ferment a culture where women can be imprisoned and raped for 'improperly' covering themselves in public. The hateful gathering is an insult to tens of thousands of decent Muslims who came to Canada to escape the brutality that the al Quds Day Islamists want to impose worldwide.

Curiously, one of the organizers of Toronto's al Quds Day, according to its facebook page, is a Siraj Ali, who describes himself as an owner of a company called Cycom Canada Corporation, which claims to have IBM as a business partner. If so, it's rather despicable that IBM is in some measure contributing to a rally known for antisemitism and the praise of terrorism.

There were a few dismal hangers-on hoping to capitalize on al Quds Day, and delivered talks at the behest of Iran's proxies there. Among them was a American conspiracy theorist named Kevin Barrettt, a writer for the antisemitic, Holocaust-denying website Veterans Today, whose deranged public statements about conspiracies between "Rothschild Zionists" and Illuminati Freemasons strongly suggest he is seriously mentally ill.  Also there to deliver a speech was a pathetic, attention-seeking, far-left radical named Ken Stone, a fool who started out his particular brand of activism by ripping up his degree at a convocation ceremony while shrieking, "Fellow niggers, look what Mister Charlie's done to your minds!" As usual at al Quds Day rallies, in a transparently duplicitous effort to try to portray themselves as not being antisemites, the Khomeinists trotted out a pair of adherents to a weird, inbred fringe Jewish cult called Neutrei Karta. Its members dress as if they still live in 17th Century Eastern European ghettos, and their worldview has progressed as little as their fashion sense. Neutrei Karta despises Israel because of their twisted biblical interpretation decreeing that its existence is prohibited until the arrival of the Messiah. These cult members, who often look like the products of several generations of incest, will ally themselves with virtually any reprobates who share their hostility to the Jewish State. 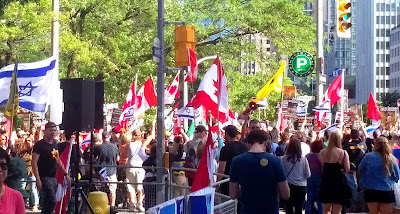 One positive note to the day was the strong showing of counter-protesters, a diverse coalition led by the Jewish Defense League that also included feminist activists, gay rights activists, Christians, atheists, reformist Muslims, and Hindus. The Israeli and Canadian flags, the jeers, and joyous songs blaring from loudspeakers were a taunting contrast to the dour vitriol of the Islamic hatemongers. The Canadian Jewish Defense League is dishonestly smeared by its opponents as connected to its defunct, discredited American counterpart, where no affiliation between the groups exists. Though sometimes aggressive in defending Jewish safety, the JDL stands in stark contrast to mainstream Jewish organizations who do nothing to counter al Quds Day besides sending ineffective letters of protest to local political leaders, which receive insubstantial responses.  While the American JDL is listed as a terror group by the FBI, the Canadian JDL often works with Canadian police and intelligence agencies to provide information on potential terrorists.

It is a sad comment on Canadian political realities that neither Toronto Mayor John Tory, nor Ontario Premier Kathleen Wynne publicly condemned the al Quds Day rally. It's not as if either of them don't support Toronto's Jewish community or Israel; both Wynne and Tory are ardent Israel-supporters. But the fear of offending Islamic fanatics overpowered their willingness to do the right thing. And unfortunately, as people all over the world have learned the hard way, vicious Islamic fanatics will not just go away if you ignore them.