The United Nations described as a corrupt failure at Idea City 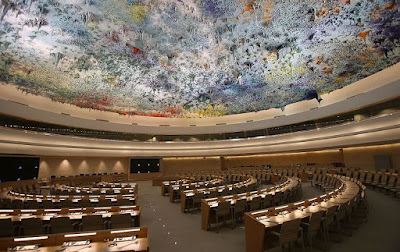 As Canadian Ambassador to the United States and later as Secretary of State for External Affairs, Lester Pearson played an integral role in the founding and early development of the United Nations. Pearson, who would go on to become Canada's Prime Minister from 1963 to 1968,  is credited with establishing the UN's peacekeeping force, commencing with the Suez Crisis of 1956. For that role, Pearson was awarded the Nobel Peace Prize in 1957.

Consequentially, Canada's emotional, philosophical, and political investment in the prestige of the United Nations has become a virtual article of faith. Since the late 1950's, Canadian schoolchildren essentially have been conditioned to believe that the United Nations has moral authority and practical value beyond question.

However, like many religious beliefs, the United Nations' value does not stand up particularly well to reasoned scrutiny. Last Friday, at Idea City, the annual conference conducted in Toronto by Canadian media innovator and impresario Moses Znaimer, an organized exercise in heresy occurred in which the corruption, ineffectiveness, hypocrisy, and destructiveness of the current UN was laid bare.

An Idea City panel, which included University of Toronto's distinguished Professor of International Relations and Political Science, Aurel Braun, National Post columnist and University of Ottawa guest professor John Robson, and Geoffrey Clarfield, an anthropologist and author who has done consulting work with UN agencies, spent close to an hour dissecting and exposing the rot at the core of today's United Nations.

Professor Braun provided historical perspective that struck to the heart of the UN's central incompetency by delineating it as fraudulent in its core purpose for existence; to provide international security and deter unlawful aggression.

The United Nations, Braun noted, was as abject a failure as the League of Nations, whose paralysis allowed Mussolini to invade Abyssinia and thus lay the groundwork for Hitler to build the forces he used for his Blitzkrieg against Europe. Neville Chamberlain, the British Prime Minister whose "peace in our time" capitulation to Hitler made World War 2 inevitable, was also the principal apologist for the League of Nation's uselessness. He proposed that though the League had failed it its main purpose, perhaps by doing other good deeds through its agencies, it could eventually regain moral and actual authority.

The opposite has happened and the parallels between the League and the UN are stark. The UN had failed to prevent the genocides in Cambodia, Rwanda, and Sudan, Its many security failings, including the inability to prevent Russia's illegal takeover of the Crimea or China's conquest of Tibet, are too numerous to list here, whereas the UN's successes are too few and minor to bother noting.

In the case of the UN, the supposed good works of its peripheral agencies are in fact corrupt enterprises that undermine any moral authority the organization may claim. The UN is for the most part a dictators' club whose member governments lack the validity of being democratically chosen representatives of their people. It is those undemocratic values and institutions that the UN frequently fosters, and in so doing, according to Braun, make it irredeemable.

Panelist John Robson described the abysmal UN Human Rights Council, which is comprised of some of the worst human rights abusers on the planet, such as Saudi Arabia, Cuba and Venezuela. Its obsession with vilifying Israel, which has a vastly better human rights record than the UN nations which condemn it, has led to an absurd situation where Israel has more motions against it in the UNHRC than all the other countries of the world combined. Seeking justice at the UN is a futile exercise since its International Court of Justice is so hopelessly politicized that it is a court of injustice.

Geoffrey Clarfield described the corruption, waste, antisemitism, and ineptitude of a variety of UN agencies scattered across the world, like the WHO, the World Bank, and the Jew-hating UNESCO, which has tried to disclaim a connection between Israel and Jews. The UN had put billions into Saddam Hussein's bank account with its crooked oil-for-food program and the panelists didn't even get around to mentioning the rapes committed by forces under the UN banner or the cholera epidemic it introduced into Haiti that killed over 7000 people.

It was, for most, an enlightening session which shattered the blind, ignorant faith in the UN's immaculateness that Canadians have thrust upon them.

I had a personal interest in the panel in that it was I who first proposed the idea to Idea City and Znaimer, in that it was meant to be part of an ongoing discussion towards establishing alternatives to the UN which would be made up only of countries which are genuine democracies.

But there is a long way to go before something like that is achieved or even to convince Canadians to look at the facts about the United Nations. In the area outside the hall where the panel was delivered, I later ran into an acquaintance; a nice person who is a very successful marketing executive with one of Canada's best known companies. I asked him what he thought of the panel and he said he couldn't stand to listen "to that right-wing, fascist crap."

The panelists all criticized the UN for its acquiescence to authoritarianism and for not promoting democratic values, which would make what they said the precise opposite of "fascist crap." I doubt very much my acquaintance would have been able to explain what fascism is if he were asked. I disagreed, but didn't challenge him. After all, it's not his fault he was raised in a national cult of uncritical UN worship. But perhaps, with more discussions like that which occurred at this year's Idea City, enough fissures in the UN's facade will allow Canadians to see the truth about the organization in which they have placed such blind, unwarranted faith.