The Death of Mainstream Journalism is Nothing to Fear 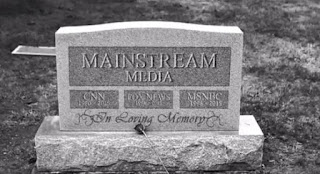 There's a crisis in journalism.

We know that because journalists keep telling us that there's a crisis in journalism.

However, what the mainstream media considers a crisis may be, for the rest of us, something else entirely.

From the media's perspective, the crisis in journalism is declining revenues and fewer jobs.

They argue that translates to a less informed public.

Is that truly the case?

Just three decades ago, to the average person, news was doled out by a small cartel consisting of a few newspapers, radio stations, and a small handful of TV networks. All of them controlled by a  coterie of wealthy people whose personal political and social biases frequently determined the way the news was reported, and even more frequently which stories their media outlets chose to, and not to report.

Those mainstream media organizations still exist, and still operate the same way. But they're losing market share and revenues.

Media's main revenue source revenue is almost always from advertising rather than from something like the amount collected from the sale price of a newspaper or magazine.

Ad revenues are down for mainstream media because now they have competition.

The Internet has revolutionized the way that news is delivered and consumed. Now anyone with a smart phone and a twitter account is a potential journalist. Anyone with a blog or facebook account can reach a wide audience and point out how the mainstream media is either publishing outright falsehoods or selectively reporting about issues, leaving out crucial facts.

The world is changing. Media is changing. For anyone interested in what is going on in the world, there's far more opportunity to get information from a variety of sources than ever.

That may be a crisis for mainstream news media, but it's good for having an informed public.

What we're seeing isn't a crisis. It's just a facet of changing times and the decline of an outmoded industry. It's the same sort of crisis buggy-makers faced when Henry Ford came out with the Model T.

It's a crisis we should welcome.
Posted by Richard K at 12:06 PM

I get breaking news about the FISA Memo from Sara Carter, FOX News and some blogs. Might be the biggest scandal since Watergate, but others ignore it.

I listen to CBC World at Six and they have nothing. They claim Trump is in big trouble. We pay for this crap?