A lot of people have been observing recently that crazed, histrionic attacks in the media on Toronto mayoral candidate Rob Ford are actually driving his support up.

The most egregious example is the demented column by Heather Mallick in al-Starzeera (The Toronto Star) where she equates the city's support for Ford to a drunken one-night stand, which she describes in all-too-graphic, sexualized detail.

Even the dim bulbs who frequent the online Marxist propaganda organ, rabble.ca have begun to question this tactic and wonder out loud whether Heather Mallick is an "agent provocateur" working for Ford. 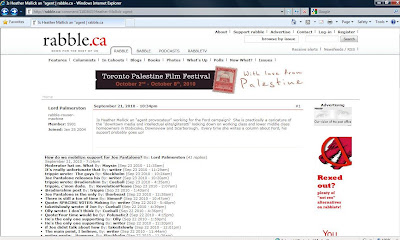 It don't get no better.

sounds like you fellers out east are havin quite a wing ding. hope it all works out for you all. us crackers out here on the wet left coast have got ourselves a bike ridin, carrot chompin commie who wants us all on bikes. sure hopy changy soon.

LOL even the commies are starting to notice that the elites hate them as much as they hate us Cons.

Don't forget to vote at their poll on the same page:

Copy of the poll: Time for an election?

Welcome to September and to the return of Canada's minority Parliament. Is it time for an election?

Hell yes! Time to see the Harperites go.
Hell no! Harper might get a majority.
Yes. But only if Ignatieff and Layton agree to a coalition before an election.
No. Let's make Harper stick to his four years between elections promise.
I really don't care. I'm one of the apathetic majority.

Yes, just knowing that Mallick was even writing about the issue oddly made me more sympathetic to Ford.

Not much more, but then, nothing else has had that effect on me so far.

Seems like Mallick's been of more use to conservatives than to so-called "progressives".