Well, the stooges on the Sea Hitler finally got what they wanted so desperately; attention and a free trip to Israel.
Their half-baked trip to Gaza was never about humanitarian aid. Gaza has no food shortages, they have luxury hotels and malls and one of the highest obesity rates in the world. The pathetic attention-seekers who became hysterical at their failed attempt to leave Greece to breach Israel's Gaza blockade were upset for a single reason then. They wanted to become heroes within their brain-dead activist circles by standing up to the "evil" Israelis, knowing full well they were taking no real risk in doing so.  But it isn't so heroic to be embarrassed by the Greek Coast Guard.

So they set out again in their longing to be able to be lauded by their idiot friends. Soon they'll be doing the activist tour circuit, like the pathetic Kevin Neish. Have they convinced anyone of anything?

They people who pay attention to them have already swallowed the facile propaganda put out by the terror enablers and dupes of Iranian interests in the West. But this exercise was never about human rights. It was about narcissism and the over-fed Sea Hitler crew now have more of that in which to wallow.

The Canadian Sea Hitler boat along with an Irish yacht attempting to break Israel's arms blockade of Gaza have been intercepted by the Israeli Navy. Evidently, communications with the Irish boat are cut off and the Sea Hitler crew are waving signs at the Israelis saying "If you board us, you are pirates." Which is more or less the equivalent of someone breaking into your house wearing a t-shirt that says, "if you stop me, you're violating my right to rob you." 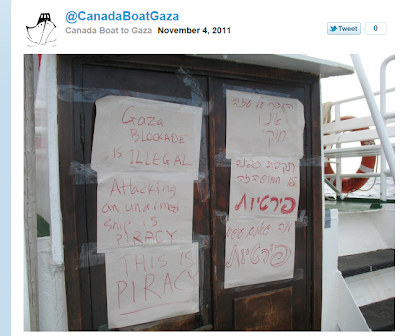 Updates from the flotilla of fools twitter feed here