..an old photograph, snapped on an August afternoon during the 1936 Olympics in Berlin. 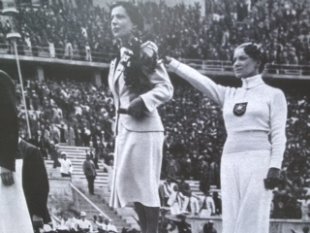 And in this picture there is a woman, dressed in the white uniform of the German team. She is standing on a medal podium having just received her silver for fencing and her right arm is outstretched in a Nazi salute.

The woman's name is Helene Mayer.

She is the daughter of a Jewish man.

And because of this fact, she has essentially been banished from Germany to the United States, allowed on the Olympic team only so the Nazis can tell the world they support a Jewish athlete.
Posted by Richard K at 1:30 PM