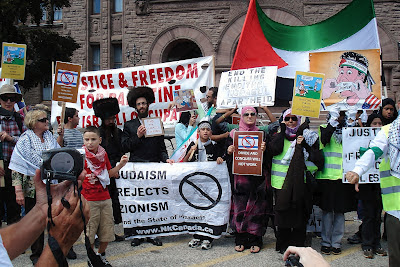 That part of our brain that harks back to the earliest stages of evolution is sometimes prompted to an instinctive revulsion and alarm by a certain type of  heinous person we may encounter from time to time.

Saturday afternoon, Toronto's Queens Park was filled with them. The men, grubby, bearded, execrable and vicious, with their their truculent, subservient women shrouded in robes as dark as their pernicious hearts. While their loathsome spokesmen preached poison, they were there in the hundreds; depraved acolytes of Iran's deceased mass-murdering, sadistic dictator Khomeini.

Ruhollah Khomeini, Iran's absolute ruler from 1979 until his welcome death in 1989, was every bit the monster as Stalin, Mao, Pol Pot, or Saddam Hussein. His murderous regime systematically raped female prisoners, many of them children, and tortured and murdered its political opponents and members of  religious and ethnic minorities.It was utterly repugnant to see admirers of that bloodthirsty totalitarian teeming like vermin on the green lawn  in the shadow of the Legislature. Many, if not most of them, are immigrants to our county. Their assembly was an insult to the democratic freedoms of Canada, which they ostensibly sought as refuge, but apparently surreptitiously invaded as an evangelizing vanguard of Islamism.

Puerile support for the Khomenists was delivered by a tiny, bedraggled collection of cretinous local Marxists from groups like the Ontario Coalition Against Poverty, the so-called Canadian Peace Alliance and a group of emotionally unbalanced Jews calling themselves Independent Jewish Voices. Like pathetic ideological catamites, they came to ingratiate themselves to the Ayatollah's apostles. Between them all, that syndicate of reprobates worked themselves into a pernicious frenzy before the seat of the provincial government with the sanctification of Ontario's Speaker of the Legislature and Sergeant-at-Arms.

Knowing journalists were scrutinizing them, they were on their best behavior, but they could not refrain from at least one anti-Semitic trope when a speaker announced that the "media, which is owned by the Zionism and the Zionist lobbies."

"Zionism is terrorism," "Zionism is racism" "Down with Israel" were chanted from bullhorns and through face veils. But conscious that the eyes of the media were upon them,  most of the heavy lifting of invective and demonization was delegated to useful idiot Jews, so the Khomeinists could pretend their anger was only towards the "Zionists."

They dangled two clownish-looking misfits from the bizarre Jewish sect Neutrei Karta at the front of their gathering. The duo, brought in from Montreal, said nothing to the assembly, but their appearance, that seemingly mimics Nazi-era propaganda caricature depictions of Jews, spoke volumes of the depths to which the Khomeinists will descend. Neutrei Karta is a close-knit Jewish cult, many of its members look like the product of generations of inbreeding. They believe that Israel is something that God has said will be denied to the Jews until the coming of the Messiah. Since The Jewish state exists and the Messiah has not arrived, they assume that Israel is some error of God that they must correct. The cult also apparently believes that God wants them to always dress like early 19th Century Eastern Europeans in the middle of winter, as evidenced by their being garbed in round beaver hats, stocking breeches and long, heavy black overcoats on a hot August Saturday afternoon.

The Khomeinists also paraded the corpulent Jewish owner of the Sea Hitler Gaza boat, Sandra Ruch. No lightweight to begin with, she appeared to have recently gained about 50 pounds, undoubtedly to show solidarity with the starving people of Gaza who are currently suffering from a deprivation of Dom Perignon and bacon at their luxury hotels due to dietary restrictions imposed by the Islamist Hamas government. The Islamic proscription against liquor is almost certainly a cruel but remarkably successful Zionist plot to deprive  Muslims of pleasure and make them miserable.  Ruch rambled on in a hyper-emotional diatribe in which she sounded like one imagines Justin Trudeau would if he were overdosing on the drug Ecstasy.

The tedious Suzanne Weiss spoke as well. Weiss was born in France and escaped the Holocaust as a toddler and pretends to be an expert on subjects about which she knows very little. She behaves as if her experiences as a two-year old that she cannot remember somehow bestows moral authority on her fatuous analogies of Israel with Nazi Germany.

But the most egregious insult to decency came in the form of a speech by Ken Stone of Independent Jewish Voices, a group of 9-11 conspiracy theorists and self-hating Jews. Stone's speech recalled the notorious ravings at last year's al Quds Day gathering by the hate monger Zafar Bangash. He spoke about wanting to eliminate the Jewish nature of Israel by overwhelming it with Muslims. This is an effort Stone has invested himself into before, being an organizer of this year's Global March To Jerusalem, a planned invasion of Israel by Palestinians and its supporters in which there were deaths and dozens of injuries.

He boasted about his organization's role in working with the United Church of Canada to achieve that denomination's recently passed resolution to boycott Israeli settlement products.

Yet while pretending to be a legitimate group of Jews who are still attached to their religion but opposed to Israeli policies, Stone's uncontrolled furor led him to make a stupid mistake. Screaming about the efforts to deny the al Quds Rally a permit to assemble at Queen's Park this year, he blamed "the Jewish Lobby." Stone forgot to use the code word "Zionist," thus betraying the dual realities that most Jews want nothing to do with the fringe lunatics of Independent Jewish Voices while the members of his organization harbor malice towards their less "progressive" co-religionists.

Sid Lacombe of the pro-Iran Canadian Peace Alliance was at the rally, railing against Stephen Harper, the US, Israel and making imbecilic allegations about western conspiracies to use "Islamophobia" as a justification for raping and pillaging in Muslim countries. But that sort of idiocy is to be expected from such people.

The real comic relief at this al Quds rally came from Zafar Bangash. He courageously challenged anyone, anyone who maligned his Khomeinist followers as hate mongers or anti-Semites or those who promote the idea that Islam is oppressive, to publicly debate him. Then he quickly added the caveat that exempted from his offer were members of what he called "right-wing, fascist media." By what Bangash would likely characterize with those terms, it pretty much means if that debate were to occur, it would be limited to being between him and The Toronto Star's pro-Islamist columnist Haroon Siddiqui.

More nefarious was the speech by a denizen of Canada's anti-Israel establishment, the consistently unkempt Ali Mallah. Mallah began with the chant generally interpreted as calling for the destruction of Israel as a Jewish State: "From the River (Jordan) to the (Mediterranean) Sea, Palestine will be free." Meaning, obviously, free of Jews.

Mallah was introduced as a long time fighter for "social justice." But there is interesting evidence that shows that Mallah's idea of social justice is selective and hypocritical, particularly when Muslims are the perpetrators of injustice.

Previously, Mallah had been a Vice President of both the Canadian Union of Public Employees (CUPE) and the Canadian Arab Federation, the latter organization having lost its federal funding after Immigration and Citizenship Minister Jason Kenney identified it as anti-Semitic.

While a CUPE Vice President, Mallah was challenged by a member of his union, accusing him of silencing the discussion within the union about the Muslim genocide of black Africans by Arab Sudanese in Darfur.

Mallah's response, which can be seen on the CUPE website, was (his bolding, spelling and syntax errors included):


"...Now, withis the risk of giving any merit to your accusation, I inform you and all that at one meeting last year, We had a  a tense discussion about this issue and  It was the International Solidarity committee and later the executive of CUPE  district decision not to be dragged into a suspicios  calls by some organizations (that are well known of its biases and disregard to Human rights) to participate in demonstartions that based on Islamophobia and prejudices while shedding crocodile tears over Darfur, Sepecialy when it  is paving the way for another Imperialist project led By G.W. Bush, Condie and the rest of the gang. also, part of the debate was focused on the fact that there attempts to divide the  people of Sudan Sudanees as Arabs VS  Africans. I am sure you agree with the  fact,  that Sudan is an African Country and its people are Africans regardless of religion and  languages/ dialect."

So this individual, who has invested countless hours and untold energies into demonizing Israel for defending itself against terrorist groups, seems wiling to overlook a genocide of innocents, with hundreds of times more deaths than the Israeli/Palestinian conflict, as long as it's being perpetrated by Muslims. Mallah also felt compelled to include some anti-American conspiratorial nonsense in his ludicrous attempt to justify himself.


That, as much as anything, tells the story of our local Khomeinists' commitment to "social justice."

Despite all the hype, the al Quds Day fiasco turned out to be a rather dull day. The Jewish Defense League turned out in large numbers to challenge the supporters of Iran's mullahs, but the most passionate were the small contingent of Iranian ex-patriots who escaped the murderous regime. Well aware of the diabolical acts of Iran's rulers and the hundreds of thousands of murders they are responsible for, their fury was palpable. And the Khomeinsts despised them even more than they resented  Jews, knowing that these honest, pro-democracy Iranians knew more than enough about them to discredit the lies of the Ayatollahs' servants.

It ended with a march from Queen's Park to the US consulate, a few blocks south on University Avenue. If the Khomeinists were hoping to win people to their cause, they will be disappointed to learn their march was counterproductive. Normal citizens walking along University Avenue who witnessed the throngs of women enveloped in burkahs and cahdors, the angry men shouting "Allahu Akbar!" and the flags of terrorist-run  Palestine and Iran, were as appalled as if some giant slime creature had crawled out from the sewer. Many commented about how revolting it was to see supporters of Iran, one of the most repressive regimes on earth,  parading through the city.

Ali Mallah promised that next year they would return to Queen's Park to demonstrate, whether they had a permit or not. Nothing that was said this year would technically qualify as hate speech, so there is no reason to deny them one in 2013. But the Khomeinists' opponents can take comfort in knowing that no one and nothing does a better job of discrediting them than they do themselves when they let average citizens see their repulsive nature out in the open.


more pics from Saturday below...


PLUS - a video photo montage here and lots more very interesting photos and write-ups , including video at BlazingCat Fur and  Five Feet of Fury, and of course Scaramouche AND great photos and comments at Blogwrath. 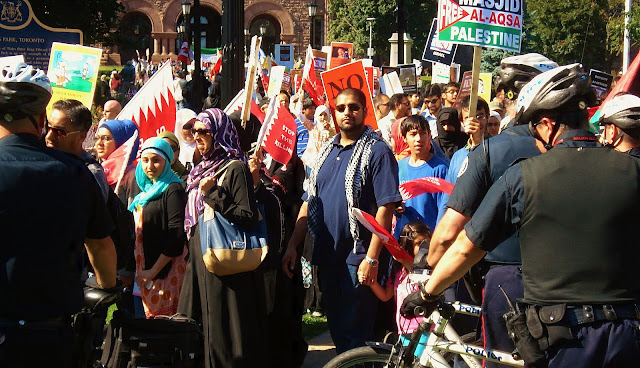 re: the march: "As if some giant slime creature had crawled out from the sewer"....lol...it certainy was a freakshow..