Will Ontario have its first OISE Premier?

There aren't too many people who are opposed to social justice. The only problem is that different people have a different concept of that term. For quite a few, particularly at the University of Toronto's radical, politicized diploma mill, the Ontario Institute for Studies in Education (OISE), social justice is a euphemism for anti-Capitalism.

OISE has made the news quite a bit in the last two years, thanks to diligent investigation by Toronto bloggers, and none of that news has been positive. It's most famous alumnus until now is the disgraced former Education Director of the Toronto District School Board, Chris Spence. A Doctor of Education degree he received from OISE in 1996 was bestowed on the basis of a plagiarized thesis. Naturally, it wasn't OISE professors who are supposed to be experts in education,, but investigative journalists who discovered the plagiarism. The institute has programs with preposterously low academic standards and awarded advanced degrees to theses notorious for promoting racism and anti-Semitism, as well as lunatic, idiotic theories that demonstrated no empirical research. 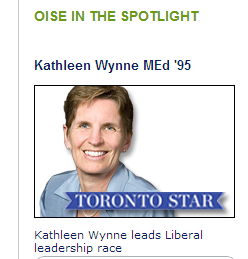 The school has programs which openly advocate against "neo-liberalism" (i.e. free-market capitalism) in favor of Castro-style communism. Its student population is demographically representative of the Church and Wellesley neighborhood in Toronto and they want to impose the attitudes that are pervasive there throughout the entire province.

So when one of the leading contenders for the Liberal Party of Ontario's leadership, which will make the winner the new provincial premier, announces she wants "to be the social justice premier," Ontarians should take her seriously. Particularly when that person, Kathleen Wynne, is an OISE graduate.

One of the most reprehensible facets of OISE-type social justice is their dogmatic zeal in suppressing any thought or idea that doesn't conform with their own. It is an ideology that has no respect for free speech. Rooted in the concepts of an approach called Critical Pedagogy, founded by a Brazillian Maoist named Paulo Freire, the world is divided up into a Manichaean division of oppressor and oppressed, in which oppressed can do no wrong and oppressor can do no right.

OISE thought revolves around a facile notion of victimhood, with points and tiers awarded for various perceived historical subjugation. So a white, Christian lesbian gets points for being a woman and homosexual, but still loses to a Muslim Arab, who has points for being a non-white, colonized member of a religion which is perceived as being oppressed (despite the fact that more acts of religious oppression are committed in the name of Islam than all other religions combined).

The bad news for most Ontarians of European background is that they fall into the oppressor class.

There are places in the world where being born into the wrong race and religion is a horrendous deficit, and people of the wrong color or faith are made to suffer.

If OISE graduate Wynne becomes Ontario's premier this weekend, pray she didn't take her education to heart. Because if she did, a majority of people in the province may have to pay a heavy penalty for having committed the unforgivable crime of being born to the wrong ethnic groups - the ones that founded Canada.

This is clearly an empirical falsehood and is thus propaganda.

"The bad news for most Ontarians of European background is that they fall into the oppressor class...If OISE graduate Wynne becomes Ontario's premier this weekend, pray she didn't take her education to heart. Because if she did, a majority of people in the province may have to pay a heavy penalty for having committed the unforgivable crime of being born to the wrong ethnic groups - the ones that founded Canada."

Interesting, when the "oppressor" or the white person in this narrative engages in race dialogue they can't even racalize themselves as white, meanwhile the oppressed are forced to racialize ones self as a result of said oppression. Again, this manipulation of reality is simply more propaganda. Well done Toronto Sun!

Someone did a good job of conditioning you, Mich. Do you have any idea of the number of physical attacks on Christians and other non-Muslims in Muslim countries in the last few years? It's in the tens of thousands. Does Darfur ring a bell for you? How about the Copts in Egypt and what's happening to them, or the attacks on Christians in Pakistan.

I know the trend by OISE and such nitwits is to simply deny facts that don't suit their ideological brainwashing, but they remain facts nonetheless.

"Racialization" is also something that suits collectivist imbeciles at OISE because it fits in to their Marxist agenda of denying and diminishing individuality. You would have done well as obedient drones in Mao's China, but in a culture that respects individual liberties, not so much, other than living at the whims of government largess.