In a meeting room at Central Technical School a couple of Tuesdays ago, about two dozen representatives from most of the schools in Toronto's downtown Ward 10 sat in an inward facing circle with their attention focused on Toronto District School Board Acting Director Donna Quan.

To Quan's left sat TDSB Chair Chris Bolton and to her right, the area School Superintendent as the  Acting Director delivered a presentation on findings from the recent census of the Board's students.

Entering the meeting while it was in progress, I was eyeballed suspiciously by both Mr. Bolton and Ms Quan. It could have been my generally unsavory appearance, or possibly they were familiar with some of my interviews on the Sun News Network in which I had made rather critical remarks about the attempts at social engineering and promotion of Marxist theory infused into the Board's curriculum.

The Census, compiled during the 2011-2012 school years, covered basic data such as ages, family incomes, et cetera, to questions that would normally be found on a psychological evaluation, such as "How comfortable do you feel discussing problems with your teachers or other adults?" and questions about their anxieties.

As Ms Quan discussed the results of the census, it quickly became apparent that the problem with the data is that it is wide open to a variety of interpretations and could be used to "prove" any presupposition one wants.

For instance, a great deal of effort went into categorizing data based on race. On the whole, certain racial groups have a better academic performance than others. But I pointed out to Ms Quan that there is an overlap between race and culture, two independent factors which are frequently conflated. There's no evidence that skin pigmentation has anything to do with academic performance, but factors such as a cultural emphasis on the importance of education and achievement and maintaining cohesive family structure do affect scholastic outcomes.

Responding to my inquiry about whether the census collected data about national and cultural origin  so that could be contrasted with race-based data, she said it was. However nowhere in the resulting public report can that data be found as of now.

My concern is that the TDSB will ascribe differences in performance based on the race-based data they collected to "white privilege." Indeed Ms Quan spoke at a TDSB conference last year in which  the keynote speaker, a race-huckster named Tim Wise, attributed all the inequities in the school system to just that,  and was met with a rousing ovation from that almost all-white audience of teachers. The problem with Wise's pitch, which the TDSB has swallowed hook, line, and sinker, is that the children of second and third generation East Asian immigrants do better in school than white students, which renders the "white privilege" argument preposterous.

A great deal of the census was devoted to what they called "emotional and social well-being." and it is in this area in particular where the data could be construed in any number of ways. 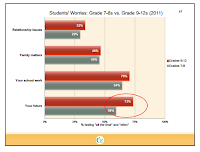 Of concern to the TDSB officials was that a large number of high school students did not feel comfortable speaking with an adult about their problems. They thought this was unusual and a significant problem.  I pointed out that it's totally natural for teenagers to feel alienated from adults and it is not limited to Toronto in 2013. Anyone familiar with literature, from the Classical era to our own, would know that this has been a human characteristic for pretty much the entirety of recorded history. If youth felt ease in communicating with adults, Tom Brown's School Days could have been a haiku instead a of classic novel.

The absurdity of over-analyzing the TDSB's finding that a large number of teenagers often feel anxiety should be self-evident, but unfortunately was not to the Board's officials. High school kids are going through puberty and discovering their sexuality. They are at an age where they feel the need to assert independence but are more conscious of having their freedoms constrained by their parents. Coupling all that with exams plus the other varied pressures of being a teen, a young person would have to be abnormal not to feel anxiety on a regular basis. Think of all the John Hughes movies that wouldn't make any sense if that premise weren't true.

Another statistic rife for misinterpretation was that a high number of TDSB students feel worried about the future.

From the School Board's perspective, the cause was Canada's changing social environment and economic factors. There are, however, alternate explanations and I offered one.

In previous years, the curriculum had more of a nationalistic tone. It promoted Canada as a noble nation that could take pride in its past,  its military history and victories, and conveyed a sense of optimism that those traditions would continue and improve.  But today, as I pointed out, the Board's students are receive lessons fraught with anti-oppression and critical race theory, which teaches that we have been and are a nation of oppressive racists, and that cultural Marxism, which is inherently pessimistic,  permeates the curriculum. So with a an onslaught of pessimism in the classroom, it's hardly surprising we're producing a generation of students fearful about the future. 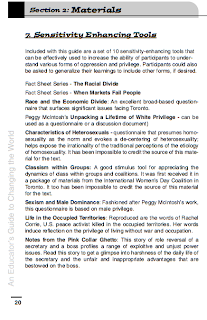 After saying all that, I looked around the room, waiting for blow-back, mainly about the assertion of cultural Marxism informing the TDSB curriculum. I was ready to back it up with a litany of evidence that demonstrates the truth of that statement, but I had expected at least the School Board officials to challenge me. After all, if someone had accused the TDSB of promoting another totalitarian ideology, for example, cultural fascism,  I would have demanded examples.

But no one batted an eyelid. Not any of the parent representatives, not the TDSB Chair, not the Acting Director. No one.

The only comment came from the area Superintendent who observed that no single factor necessarily explains the phenomenon they were discussing and in that I agreed. But no one denied we are conditioning our students with Marxist ideology.

We have arrived at a stage where a thought system that prioritizes collectivism over individuality as the basis for instructing our children is uncontroversial. It was a shock to me, if no one else at the meeting.

The blame for the poison in the schools cannot be laid solely at the feet of the TDSB. The province's Ministry of Education is responsible for approving the curriculum and things have only gotten worse under the Liberal governments of Dalton McGuinty and Kathleen Wynne.

Every time Marxism has been implemented, it has resulted in some form of totalitarianism. That we have an Education Ministry run by people incapable of learning that lesson from history should be a cause of worry to every parent in Ontario.

It was mildly encouraging that a few representatives from the Ward's schools urged the TDSB officials to put more focus on core subjects. Rather than spending so much class time on trying to produce a particular type of "global person" they should be producing students who are competent at math, reading and history.

Unfortunately, with the low turnout at meetings about school policies populated with plenty of apathetic observers, trends in the education system likely will continue their downward spiral. At least until enough parents begin to take notice and speak out against it.

You should not be surprised. It is not a secret agenda. They are proud of their Marxist beliefs.