For the vast majority of us who are parents, we see our primary duty as the protection of our children's well-being.

That duty manifests in different ways, among them the need to provide education, opportunities and guidance that will allow our kids to mature into successful, happy, well-adjusted, productive members of society. But at its most basic level, protection means exactly what the word implies, to keep them from imminent harm, be that assault, starvation, abuse or worse.

The way the world works, at some point, to some extent almost all of us have to delegate some of that protection to others. Out of necessity we hand our children over to care-givers and educators. With no small measure of parental trepidation, we place faith that those people we trust share our interests in protecting and nurturing our children.

The worst nightmare for a parent, and of course, for any child so victimized, is when that faith is betrayed in despicable ways. It doesn't happen most of the time. But it does happen.

Next month, The University of Toronto and its Ontario Institute for Studies in Education (OISE)  will be holding a symposium for schoolteachers called Bodies at Play: Sexuality, childhood and classroom life in which the keynote speaker will be University of Southern California Professor James R. Kincaid.

The ideas behind that choice suggest are both a betrayal of trust and confirmation that the nightmare we fear for our children is real. Indeed, those fears are being mocked by the very people responsible for shaping our public schools.

A comment on an earlier article I'd written about the Bodies at Play symposium noted that just as the bank robber answered when asked why he robs banks, "because that's where the money is," to pedophiles, schools are where the children are.

U of T and OISE's imprimatur of such values and concepts by promoting their advocate to educators of small children is thoroughly loathsome.

The means by which Kincaid attempts to illustrate his theories are more revealing of his own beliefs than they are about society as a whole. His claim that Macaulay Culkin in Home Alone or the young Shirley Temple "look like cartoon characters: Buster Brown or Betty Boop - images vacated so we can write our passion there" is a bizarre interpretation. In my opinion, anyone who truly believes that should be kept well away from children. 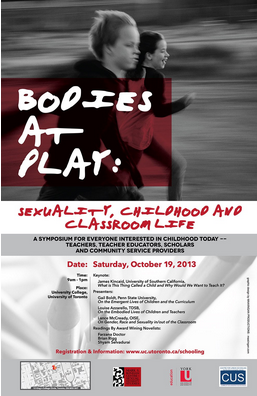 As a society, we have every interest in deploring and condemning the odious postulations that Kincaid proposes. By normalizing the eroticization of children, it is only a small measure away from normalizing the logical next step of that reprehensible idea. Will the next OISE symposium for educators feature someone who tells us we're overreacting when we condemn actual sex between adults and children?

While Kincaid's writings may have esoteric philosophical value, the choice of having him as a keynote speaker at a symposium for teachers of young children suggests stupidity at best, and an acceptance of the most repugnant values at worst.  That either is guiding an institution which influences the approach taken to education in Canada is indicative of the appalling state of our public school system.
Posted by Richard K at 1:11 PM

There needs to be a protest to this. Or else the MSM will ignore it.