From The Toronto Star: 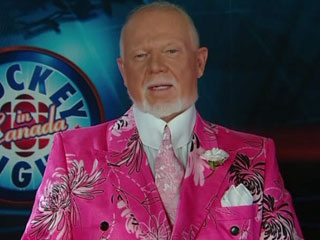 Hockey commentator Don Cherry used his official address at the inaugural meeting of Toronto’s new city council to blast “pinko” lefties, apparently taking aim at many of the councillors in front of him.

Cherry, Mayor Rob Ford’s special guest at the pomp-filled ceremony, wore a bright pink-and-white silk jacket. “I’m wearing pink for all the pinkos,” he said, apparently referring to the followers of former mayor David Miller who have dominated council for the past seven years.

Cherry said he had expected that his presence, at Ford’s invitation, would be a nice occasion but that he was “ripped to shreds by the left-wing pinko newspapers out there. It’s unbelievable”

“One guy called me a jerk in a pink suit so I thought I’d wear that for him too.”

“This is what you’ll be facing, Rob, with these left-wing pinkos – they scrape the bottom of the barrel.”

Go to the 38:10 point of this video and you can see all of Don Cherry's speech to city council
Posted by Richard K at 4:04 PM