"They're all going to laugh at you!" Toronto's loony left goes full-on Carrie's mom

Five Feet of Fury's Kathy Shaidle has been saying for weeks now that the pathetic, insecure loony left in Toronto has been acting like Carrie's Mom. These of course are people who are pathologically obsessed with how other people think about them, and they believe their worst fear, that they are being laughed at, has come true.

The belief that Rob Ford's troubles reflect directly on them is something that would only go on within diseased minds.

Yesterday, at a sparsely attended anti-Ford rally at Toronto's City Hall, in which the media almost outnumbered the protesters, Kathy's Carrie's Mom comment was fully realized.

A protester named Linda Keigher furiously, bitterly seethed into a bullhorn in front of the two and a half dozen or so assembled malcontents that:


"The world is talking about us, they're laughing at us, and they're finding it to be very funny!" 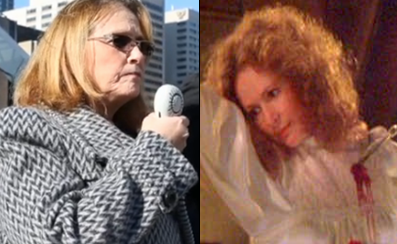 Actually, I'm finding it pretty funny too. It's something I can share a laugh about with friends who aren't from Toronto. When they ask, "so why is his popularity going up?" it's an easy answer. "Because of the other morons we'd have to choose from if we get rid of Ford."

A couple of weeks before things blew up with the latest Ford brouhaha, the Mayor went on an excursion to Austin, Texas to find ways of emulating their success as a live-music hub. Ford has accomplished something better now, making Toronto a global center of live comedy, and all his stupid opponents do is gripe!

Take a look at the idiotic, petulant, juvenile behavior of the rest of his Toronto City Council opponents when Ford spoke a couple of days ago. Like spoiled 8 year-olds, as a group, they decided to turn their back on him. 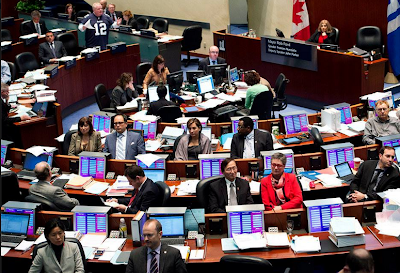 This is more disgraceful than any behavior I've seen from Ford in his role as a public official and it's completely typical of the half-wits we have sitting as Ward representatives in Toronto. Why would no other media show this picture that reveals the real face of Toronto's hateful, insecure, self-obsessed, would-be ruling class? Because if they did, they know they'd be laughed at even more.

For them, nothing could be worse than that. 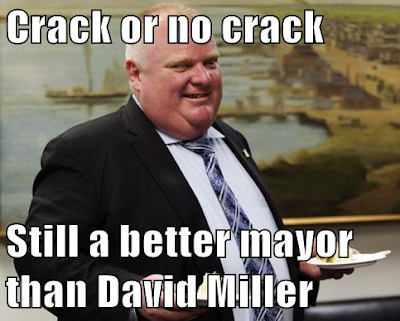 open the link it is just what your opening paragraph states.


On Friday, Councillor Michael Thompson submitted to council a petition of about 1,200 names of activists who wanted Mayor Ford to resign to convince Ford and the media of the overwhelming support for that. It was well covered by the CBC.

An exploitive petty indignation that raised it’s ugly vindictive head right from the beginning. To the libertine elites of Toronto { the self-professed universal center of enlightenment } this obese oaf was a pox on their house-of-progress an effrontery to their champagne socialist vanities and with the aid of their stenos { MSM } they have been hounding Ford to the point of persecution from the get-go . The vindictive eerie cry of the lefty-loon reverberates in their padded eco-chambers !

Never let the facts get in the way of a good narrative. Let's ignore the fact that 70% of the city wants Crackhead Rob out, either temporarily or permanently.

You know what? Legalities aside, I'm starting to LIKE the idea of a snap election.

And most of all, I want to see what I know is going to happen ... that when he gets outpolled by John Tory, Karen Stinz or Denzil Minnian-Wong, Ford proves once and for all that he thinks that keeping himself in office is more important than keeping Olivia Chow out.

But your boy is missing one important part of the analogy.

Kuwait had a bigger, smarter and more generally useful friend to save its ass, and Rob Ford doesn't.

I, unlike most fake conservatives, prefer fixed election dates in both principle AND practice. But I'll make an exception just this once because it'll be funny.

And, oh Sweet Baby Jesus, please let me see this "Respect the Taxpayer" horseshit put under the strict scrutiny of Ford giving away 5 grand of taxpayer money to each of his twenty staffers just days before that power was taken from him.

Remember how Mulroney shithammered Turner directly into hell for approving TRUDEAU'S midnight patronage appointments? I suspect that it'll look a lot like that.

There's just one thing that's stopping me from voting for the Rob Ford you present here daily - he doesn't actually exist.

Gee, Skippy. You think the 5k may have something to do with that a lot of them are going to lose their jobs because of partisanship on Council?

That money is nothing compared to what Ford has saved.

You've become completely obsessed with this, man - you've written more about Ford in my comments in the last 3 months than you have on your own blog. What the hell? Did Robbie run over your cat with his Escalade?

I know you hate it when I do this, Richard, but I do need to introduce some more facts here.

First, the bill passed by Council yesterday did not "fire" any of Ford's staffers. It gave them the option of moving them to Norm Kelly's office - which Ford created.

"Partisanship" would have been revoking the raises entirely, which Council is entirely within its right to do.

And if my math is right, 5 grand times twenty is $100,000. I'll grant you that it isn't a lot of money in the greater scheme of things, but when you're still running on Kyle Rae's $12 k retirement party, it casts as a different light on things, no?

And exactly how did Ford save us money? Are taxes higher than they were under Miller? Is spending up?

The answer to both questions is yes. By the way, David Miller wasn't on the ballot in 2010.

My issue with the Brothers Ford is their chronic inability to tell the truth about anything. Ever.

As someone who is probably well to the right of both of them, I hold our team up to a higher standard, just as they pretend that they do when they aren't constantly whining about ow they're everybody's victim, like Naomi fucking Wolfe.

If we're going to settle for shithead lying assholes like Stephen Harper and the Fords just because they wear the right colour jerseys, we deserve Kathleen Wynne and Olivia Chow.

At least their lies are closer to what they actually believe.

As for my blog, I'm on vacation.

And I'm flattered you're spending so much of your vacation with me!

God bless you for bringing that up, Richard! I as hoping you'd do that.

Because what you just said isn't what the idiot brothers Ford say every day. They declare that they've "cut" taxes, ad that our taxes are "the lowest in North America."

Which means that they're stupid, lying or both.

They cut a vehicle registration tax, but property taxes have gone up and water and hydro rates are skyrocketing. Oh, and they also set about $60 million dollars on fire when they cancelled Metrolinx without a vote, which is, per capita, one small McGuinty gas plant.

They balance their budgets through the same accounting trickery Miller used, nd without the land tansfer tax, they'd be completely fucked.

To be fair, they could run an honourable campaign on cutting the RATE OF GROWTH of spending and taxes, but, as with everything else, they choose to blatantly lie their asses off.

Or are you going to deny that, too?

One thing about which I'm sure we can agree is that our beloved mayor is not the most glib, or articulate fellow in the world. Sometimes he mispronounces words in his native tongue. He's prone to misspeaking on occasion.

But I can tell you that when Ford ran for mayor, I was with him alone in his office for half an hour interviewing him and I asked him if he was planning on cutting or freezing taxes (I think it was implicit I meant property taxes) and he very explicitly said he couldn't promise that. He said he'd do his best to keep them consistent with the rate of inflation and he's delivered on that.

If you want to be strictly literal, then as you note, Skippy, he has cut taxes, although the overall costs have gone up, but again, nowhere near at the rate under Miller.

But it's the intent, the commitment to reduce spending and make City government overall more accountable and responsible that I like in the guy. I know you're going to provide anomalistic examples to try to disprove that, but I still maintain that overall, the commitment and genuine desire are there with Ford and I don't see anything approaching that level of genuine desire and willingness to fight for what he believes to be right, against the odds, (and sometimes winning, like with the Scarborough subway,) from any other municipal politician.

This Ford business may prove to be a losing battle in the end, but I'd rather fight for something I believe in and lose than to insincerely fight a winning cause or just stand on the sidelines.