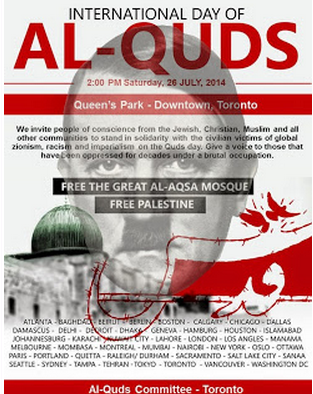 Canada has many urbane, intelligent, decent, sophisticated Muslim citizens. But you aren't going to find any who could be described that way among the horde of vile scum who will descend upon Toronto's Queen's Park tomorrow afternoon to scream their murderous hate and support for vicious, homophobic dictatorships. The Islamists who will pollute Queen's Park tomorrow are the sort that decent, law-abiding Muslims came from their places of birth to Canada to escape.

Yes, it's that fun time of year again where anyone interested can see evidence of the enormous flaws in our immigration system that allowed backwards vermin who want to murder apostates, blasphemers, Jews and gays into Canada.

They'll be there for their day of rage, al Quds Day, the holiday invented by Iran's deceased, depraved dictator the Ayatollah Khomeini, which was meant as an annual bloodfest calling for the destruction of Israel. These people will also be celebrating an avowed enemy of Canada, Iran's dictatorship. Canada broke off diplomatic relations with that country, the leading state-sponsor of international terror, in 2012 and imposed sanctions against it. But nonetheless, tomorrow you'll see the al Quds Islamists bearing pictures of Khomeini, along with the flags of groups listed as terror organizations by Canada as they chant their calls for a genocide of Israel's Jews.

It's the same crowd who condemn support for Ontario's Liberals because they are led by an "unclean" lesbian. These are the same people who wanted to see the maker of a satirical film about Islam's brutal founder beheaded for blasphemy, as evidently their death cult worships Mohammed more zealously than if he were God himself.

They'll have some useful idiot far-left radicals in tow. This year probably a few more than usual, since they'll be anxious to decry Israel's current campaign to stop rocket fire from Gaza launched by the terrorists of Hamas. As far as these degenerates are concerned, Israel has no right to defend itself. Though Hamas forces the Palestinians of Gaza to act as human shields, and Israel makes strenuous efforts to reduce civilian casualties, they'll denounce Israel's defense as a genocide. That though the sum total number of fatalities for the current two-week round of heated conflict in Gaza tallies up to fewer than a slow day's count of global Muslim-on-Muslim killings, which is repeated over and over and over. 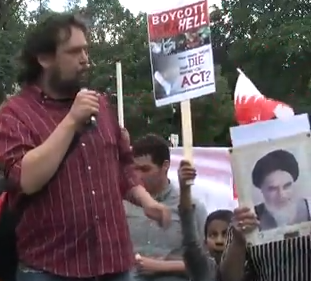 Among those who regularly speak at Toronto's al Quds rallies is Sid Lacombe, the head of the deceptively named Canadian Peace Alliance. If you've never seen Lacombe, he is what I'd imagine Leon Trotsky would have been like if Trotsky was fat, unsuccessful, dressed poorly, wasn't very smart, and couldn't manage proper grooming. His speeches suggest he has an affinity for every miscreant dictatorship on the planet, just so long as it is opposed by Canada's democratic government. He and his group of misfits therefore are a natural ally for a pro-Iran Islamist like Zafar Bangash, an al Quds Day organizer. How these radical leftists would fare under the Sharia Law al Quds Islamists would like to see imposed everywhere would probably resemble the way like-minded communists were lethally treated by Khomeini after they no longer proved useful following the Ayatollah's 1979 takeover of Iran. But then, they aren't useful idiots, with an emphasis on the idiot part, for nothing.

This filth planning to sully Toronto's streets tomorrow is something from which most reasonable people would want to stay far away.  But if you are in the Queen's Park neighborhood, it is something worth giving a look. There will be a counter-protest by citizens opposed to their depravity, but seeing the al Quds monsters themselves is an important reminder of what lack of government diligence has allowed to enter into Canada, and could get worse if those flaws in our immigration system aren't corrected. People who share our democratic values and principles, of any background, should be welcomed. But the human garbage that comes to celebrate al Quds Day is something we should be able to filter out and send back to the sewers from which they came.

Do you know anyone who's going to film the rally?

I anticipate there will be a few bloggers there recording things. There will probably be some media there too, so it should be fun to watch the CBC sanitize all the anti-Semitism and overt support for murder and terrorism out of their coverage.

Cupcake the, "Zionist Entity" dog will, as usual, be there with his Israeli flag!!