Remember an anti-Semitic thesis that came out of the University of Toronto's Ontario Institute for Studies in Education a few years ago? It caused quite a stir at the time, becoming the subject of newspaper headlines and even distinguishing itself in being condemned by a number of members of Ontario's Legislative Assembly, including the Minister of Citizenship, Dr. Eric Hoskins.

The thesis was authored by a fanatical anti-Israel activist named Jenny Peto and in it she accused Holocaust education programs of being Zionist plots, which she also said were designed to further "Jewish whiteness." The thesis was riddled with factual errors and was ridiculously facile, with its first-hand research limited to the author's perusing of a couple of websites from two Holocaust education programs she tried to malign. The thesis was so destitute of academic rigor and replete with inane bigotry that it became a massive embarrassment for the University of Toronto and called its academic standards into question.

Peto herself became something of an embarrassment and for a while seemed to keep a fairly low profile within Toronto's anti-Israel mafia, perhaps because even they realized the involvement of someone like her could go a long way in discrediting them. But when your whole raison d'etre is to try to bring down the Jewish state, then like a junkie's need for heroin, some means has to be found to fulfil that obsession.

Well... it seems Jenny Peto is no more.

The old Jenny Peto, a self-described practitioner of "Queer Palestine solidarity," has undergone a metamorphosis, had what appear to be some physical modifications, and became "Ben Peto."

On Sunday, Ben Peto will be leading an anti-Israel rally in Toronto .

As the terror group Hamas indiscriminately launches rockets at Israeli civilians, while in Gaza, the civilian population are used as human shields by the Palestinian leadership, it is Israel and only Israel that "Ben" Peto spuriously accuses of "war crimes."

The rally "Ben" is organizing purports to be "child-friendly."  An event effectively sympathetic to the terror group Hamas isn't the sort of friendliness to which I'd imagine too many people would want their children exposed. But there isn't anything about "Ben," in any regard, I'd want to use an an example for children. 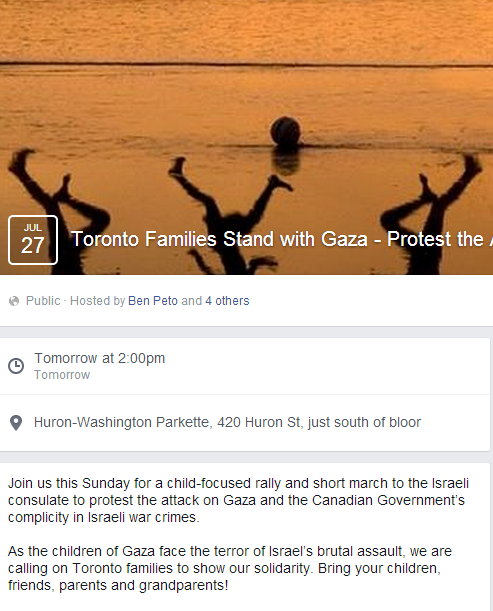 UPDATE - July 27: I passed by the park at the peak of the gathering, and there were about a dozen useful idiots from the Ontario Coalition Against Poverty (OCAP) along with Jenny Benny Peto, plus about an equal number of small children made to carry silhouette figures to represent dead children in Gaza. Naturally, there is no context for this nor could there be for the kids these creepy professional activists used as propaganda tools. Benny Peto playing Pied Piper to prepubescent pawns was a perverse reminder of how of Hamas uses children as human shields for terrorism.