The Rebel, The Walrus, and how Gavin McInnes is a crappy comedian, but that's not quite the same as being a Nazi 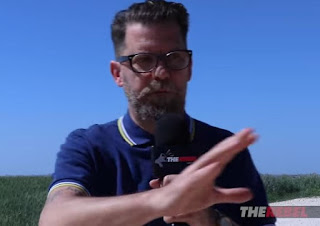 As far as I'm aware, my friend Michael Coren and I are two of only three people to be published by both The Rebel and The Walrus, which are close to being at opposite ends of the Canadian political spectrum. Indeed you can go further right or left, but that would take you, respectively, dangerously close to the insanity of James "Dimitri the Lover" Sears'  Nazi-leaning Your Ward News or the demented neo-Marxist website, rabble.ca.

I'm acquainted with both The Rebel's founder Ezra Levant and The Walrus' Editor-in-Chief, Jonathan Kay,  who have an odd public 'frenemy' relationship. I find them both to be charming, clever, and in their own ways, devoted to improving public discourse regarding the most important political issues facing the country.

The Rebel and The Walrus are both frustratingly biased in their overall coverage, and yet are important contributors to Canada's media landscape in that they delve into areas most mainstream media neglects. Although it's been a long time since I've bothered to submit anything to either, that's why I continue to read both often and feel both a sense of pride and embarrassment at having my name in some small way associated with them.  This week, insofar as The Rebel is concerned, the embarrassment is significant.

Rebel contributor Gavin McInnes made some comments on another website that, on their surface, sound borderline Nazi-like. I've followed McInnes' material to some extent and I don't believe he is a Nazi or genuinely antisemitic. McInnes clearly sees himself as a comedian who offers social commentary. The problem is that, while he sometimes hits the mark, for the most part he's neither very good at comedy nor shows vast insight in his social commentary.

The first piece I wrote for The Rebel was titled Should Comedy Have Boundaries? At the risk of giving away the gist of the article, the answer is a qualified No. But at the time, I wrote that a particular problem that can occur: "when a comedian keeps making the same type of unfunny joke over and over, is that it can lead the casual observer to the natural conclusion that it's not actually a joke, and the joker is just an asshole. "

McInnes' frequent forays into White Identity Politics are often as shallow as the Identity Politics one hears from anyone else, and which have done nothing but divide people in the name of equity. By doing it as comedy, it doesn't make his insights any more poignant, but I suppose it gives him some deniability as to his intent.

McInnes' controversial comments indicate he thinks that the Holocaust isn't unique among 20th Century genocides. He's wrong. While all genocides are deplorable, the Holocaust is unique in that Germany singled out Jews alone for their religious identity and waged war with the intent to exterminate all of them them. Mao and Pol Pot's 's murders of millions of their countrymen was monstrous, but those were not attempts to eradicate an entire ethnic group. They were political acts of violence. Even Stalin's murder of millions of Ukrainians was not designed to annihilate a whole people but to force a nationality of people under his control into submission. It was, at its core, political terrorism.

Even in regard to the shameful history of religious persecution in history, the Holocaust remains unique.  The Spanish Inquisition persecuted Jews, to be sure (although unbelievers, 'heretics,' and Muslims were treated far worse by the Inquisition). But in that regard, Jews could avoid the Inquisition by leaving Spain or converting to Christianity. In contrast, the Nazis didn't care if a Jew practiced Judaism or Christianity. Merely having one Jewish grandparent was enough to qualify someone for Hitler's Jewish extermination policy in any country the Nazis conquered.  Even in the waning days of the Second World War, Hitler and Himmler diverted resources that could have gone to the German war effort into rounding up and murdering Jews. It was a pathological, deranged, yet systematic attempt to kill off any trace of a whole group of people. The world has seen nothing like it before or since.

Saying stupid things meant to be taken ironically doesn't necessarily make someone a Nazi. McInnes has said that the comments he made were taken out of context, and to his credit, he has denounced actual Nazis and White Nationalists like the odious David Duke and Richard Spencer. In no uncertain terms, McInnes made it clear he supports Israel and that the antisemitic tropes he joked about were not true. An actual Nazi would have stood by them. Again, McInnes' flaw is not that he's a Jew-hater, which he most certainly is not. It's that he's not great at comedy. Maybe he should see if he can find a Jew to help him with that. I understand there are some good comedians among the Chosen People.

On the other side of the scale, Jon Kay suggested that if McInnes were a Muslim who said the sort of things he did at a mosque, the right-leaning media would be all over him. That comment suggests a distinct lack of perspective. McInnes did a terrible job of comedy on his own website. Yet even assuming he was serious about what he said, being an Internet comedian babbling online is a very different proposition than issuing religious edicts to hate and kill people in the name of Allah. Someone as smart as Jon Kay surely should understand the moral, if not the actual difference between the two.

So far, I've heard very little from The Rebel to indicate that they are interested in clarifying this controversy. That's probably a mistake as Conservatives like Chris Alexander are rushing to distance themselves from The Rebel.  Leaving matters with only slight clarification creates the damaging impression for Ezra Levant's media creation that it enjoys flirting with the 'alt-right' while trying not to skate over the line into being part of it.

If that really is the case, I'm going to have to continue to be embarrassed by my Rebel past while still secretly being glad they're exposing the more flagrant and awful aspects of left-wing extremism and Islamism that have insinuated themselves into Canada's political establishment.

Of course, if I'm embarrassed, imagine how poor Jon Kay must feel. Barbara Kay, one of Canada's premier journalists, and Jon's mother, is that third person who was published by both The Walrus and The Rebel, where she remains a regular contributor.

Well, Richard, I don't see how this would anger anyone on the Left or Right, since it's mostly about making Jew-jokes and whether McInnes should ask a Jew for help with them (a rather crass comment, if I may add). David Duke isn't even a full Nazi as he has allowed, and even welcomes, blacks and Muslims into his ranks so long as he hates Jews.

"Even in regard to the shameful history of religious persecution in history, the Holocaust remains unique. The Spanish Inquisition persecuted Jews, to be sure (although unbelievers, 'heretics,' and Muslims were treated far worse by the Inquisition. But in that regard, Jews could avoid the Inquisition by leaving Spain or converting to Christianity." - Well, the Spanish Inquisition wasn't as violent as is commonly claimed, and it should be mentioned that the Jews who were put on trial were convicted - by the use of a secular court - that they had collaborated with the Muslims. The Inquisition was more about corruption than the bigoted, ignorant hand of the Church.

"In contrast, the Nazis didn't care if a Jew practiced Judaism or Christianity. Merely having one Jewish grandparent was enough to qualify someone for Hitler's Jewish extermination policy in any country the Nazis conquered. Even in the waning days of the Second World War, Hitler and Himmler diverted resources that could have gone to the German war effort into rounding up and murdering Jews. It was a pathological, deranged, yet systematic attempt to kill off any trace of a whole group of people. The world has seen nothing like it before or since." - Well, yes and no. The Armenian genocide was one, where Armenian Christians were rounded up and exterminated based on that principle. The Hindu genocide - nearly ten times that of the Holocaust - by the Muslim invaders was done on them being idolaters. The genocide against the Boers by the British was done on their defiance and them being Boer; Shaka Zulu's Great Scattering was done on the concept of race, and the interminable and constant genocides by Native Americans against Native Americans has untold numbers. The persecution, mass murder - triple the number of Jews - of Slavs on the idea that they /might/ be a Communist is hardly talked about. The German hatred of the Slav goes deeper than the Jew.

So to imply that the Holocaust was unique as far as genocides go is frankly false. There are scores of genocides based on religion and race that went on before the Jewish people were even invented. It is one thing to disagree with the Rebel. But it seems that you're just upset at McInnes' trolling because of some anti-Semitism.

Why are you upset Barbara Kay is there? She's still a feminist. And why complain of bias when you celebrate our police forces twerking in gay pride parades?

Sorry. I can't agree with you on this one. It's rather poorly argued.

Your reading of this entire piece, and your historical interpretation is somewhat flawed, Unknown. The other genocides you list were based on religion, which is not something I said was unprecedented, but the Nazi Holocaust of Jews involved invading many other countries and seeking out Jews for extermination in them. It was not a by-product of war by Nazi Germany, but one of its main motives.

You seem to have some disdain for Pride, or is it just twerking by police? I don't actually celebrate anyone twerking, well unless it's a woman with a nice posterior. But I'm not upset about Barbara being with The Rebel. The opposite. She's an excellent journalist and adds value to their brand. I just find it a little amusing that the mother of one of The Rebel's most outspoken critics works for them.

There's a lot more I could go into, but I have other things to do. However, as to McInnes, I gave up on him a long time ago, when he made his idiotic, unfunny, racist joke about Jada Pinkett. I was pretty much done with him then. I didn't comment because it didn't get huge attention at the time and I didn't find out about it until weeks later. For some reason, that didn't get as much attention as this current controversy. In large part, I'd expect this current issue is getting more attention because Canada's left-wing media is trying to create a rift between pro-Zionists and nationalists, and so they're playing this for all they can.

You may have noticed I did unequivocally state I don't believe McInnes is a Jew hater (even though he jokes about being one). But he's not very funny and he's not particularly clever, and to do the sort of thing he's trying requires a lot more skill than he has.