The smug idiocy of the political left 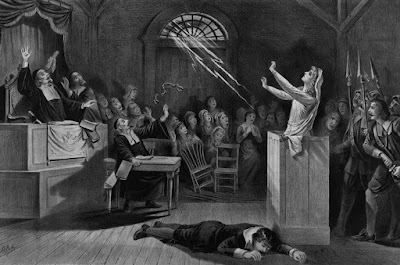 Looking back from the Twenty First Century at the witch trials of medieval Europe and 17th Century America, our generation has a smug feeling of superiority over predecessors we deride as being gripped by stupidity, superstition, and hysteria.

But are we really better?

It's unlikely future generations will take a kind view of masses of our contemporaries who don pussy hats, people dressed as vaginas, lily white "social justice" activists marching at Black Lives Matter events where the organizers refer to white people as sub-human, and histrionic denunciations of anyone who says anything favorable about Donald Trump.

Whether those protesting and denouncing any challenge to the status quo of 'progressive' dogma have any command of relevant facts is immaterial. What's important is that one is perceived to be part of the herd, or else face denunciation and ostracism from all the "goodly, caring folk."

We live in times where not just to saying, but physically embodying in dress and action what the 'socially conscious' are supposed to think has become a form of mass hysteria not witnessed since the panic of the Loudun possessions during the Reformation years in Europe.

This week's Globe and Mail has a column that is completely characteristic of the sort of unthinking idiocy that comprises much of today's leftist zeitgeist.

Milo Yiannopoulos is a thinker, and public figure who dared to challenge leftist doctrine on issues like identity politics, Third Wave Feminism, Islam, free speech and censorship, and conservatism. His appearances on college campuses were often met with violence from leftists who were terrified of his message and his persuasiveness. Yiannopoulos is neither racist nor a fascist, but was characterized that way by ignoramuses who are terrified of what the anti-establishment provocateur represented. Some exceptionally ill-advised, badly phrased comments by Yiannopoulos, which indicated approbation of sex between adults and teenagers, derailed his career last week and that was seen as a great victory by the left. Forget for a moment that leftist darlings like Bill Maher and George Takei have said virtually the same thing as Yiannopoulos without any consequence. What's important is that a witch was burned and we can all rejoice.

Emblematic of the hysteria and stupidity that typifies contemporary leftists is an article in Canada's Globe and Mail, a newspaper which is generally considered the nation's 'newspaper of record.'

A writer named R.M. Vaughan, in denouncing Yiannopoulos' politics, described the object of his contempt as, "a nasty and cruel hate-monger, a vicious creature propped up by the U.S. far-right who enriched himself by selling prejudice, racism and lies."

What is truly incredible is in the subsequent paragraph that Vaughan wrote.

After describing Yiannopoulos as a proponent of racism, and then writing, "no reasonable person could ever condone Yiannopoulos’s writings or the ideas he disseminated," Vaughan actually put in print the admission, "Personally, I am unable to read more than a paragraph of his essays. I cannot bear to watch him on television. And yet, to my horror, I think I now understand what propels a person like Yiannopoulos to make a living off of hate."

There's nothing any critic could say that is more damning than the words the political left crafts on their own. A leftist at one instant decries someone as a racist, a liar, a hatemonger, and professes to understand what motivates him, and in the next proudly admits to not ever reading or listening to a substantial amount of what the condemned person actually ever wrote or said.

Does a trial in which guilt has been pre-established without the need for any evidence sound familiar?