The results of the Mountain Equipment Co-Op Board election were announced last week. Dru Oja Jay, a harsh critic of Israel, who advocated a boycott of Israeli goods, was one of the candidates. He publicly said he wanted to "reopen the debate" about using Israeli products. Of course "reopen the debate" is code for wanting to change a currently established position. Dru's use of that term reflects the same context as those who say they want to "reopen the debate" about abortion in Canada. The people who say that are uniformly doing so to advocate against legal abortion.

Despite the full support of those prominent anti-Israel extremists, Oja Jay went down in flames, coming 8th out of 10 candidates, narrowly missing 9th place by less than a hundred votes. 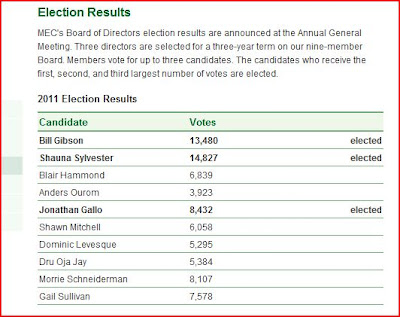 The outcome is positive, and not only for the obvious reason that Mountain Equipment Co-Op's board won't contain an agent of bias against the middle east's only liberal democracy for the next year. It also demonstrates how little influence the voices of fanaticism have over the general public.

The anti-Israel zealots are weak and they know it, which is why they only choose what they think are the softest targets to attack. They think that a co-op would be naturally sympathetic to them. Though they won't see it, because ideologues seldom see outside their own obsession, this rejection of them is indicative of the bankruptcy of their ideas.

The people have spoken, and we've told the anti-Israel bigots that we aren't interested in their message.
Posted by Richard K at 11:14 AM