The poll of the audience at last night's Munk Debate over the proposition, "Will the 21st Century belong to China?" was split right down the middle prior to the debate. The ballots showed that 39% agreed  and 40% disagreed with 21% being undecided.

The debate subject was a bit odd in that it required the participants to prognosticate and as Yoggi Berra said, "It's tough to make predictions. especially about the future."

Nonetheless, debaters David Daokui Li and Niall Ferguson for the pro side and Henry Kissinger and Fareed Zakaria for the con, despite presenting opposing positions, were all very convincing about their ability to see into the future as far as China's role in the world is concerned.

Doug Donderi's and my debate for the Head-to-Head contest won us seats on stage, a few feet from Kissinger, who as Munk Debate moderator Rudyard Griffiths informed the audience, was participating that night in his first public debate ever at the age of 88.

The audience was clearly there to see the legendary former Secretary of State, but if the debate had a star, it was Harvard professor and Kissinger biographer Niall Ferguson. Combining a remarkable command of information about the extent of China's global economic reach he also hilariously beat up Kissinger and Zakaria with quotes from their own works where they predicted China's global dominance.

Kissinger, famous for leading the move to establish relation between Communist China and America had a special insight into the evening's subject.  His view was that the political upheaval that China has in store from a growing middle class that will demand more political rights and freedoms combined with the shift from a rural to urban population, will keep China too busy internally to capitalize on its current economic trajectory.

The evening had a bit of an intimidating moment in the form of a warning from Professor Li. He cautioned the West that China is growing stronger and stronger and it would not tolerate interference in its interests from the outside. Ferguson revelled in that moment, using it as an example of growing Chinese confidence and power. I just found it kind of scary.

It wasn't until the end of the debate that I was convinced that China may indeed be the world's single dominant player for the bulk of this century until Ferguson made a concise and fascinating point. He discouraged the idea of thinking of democracy in American/Western terms. Democracy has different, yet functional approaches through the world, and he suggested that the Chinese model would look like a giant Singapore. 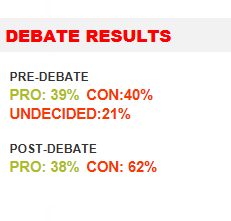 That swayed me. But I was in the minority among the audience. It was Fareed Zakaria's emotional  'mom and apple pie' closing appeal to the audience not to give up on the free west, free markets and free societies that won the argument for the con side.

The event itself was quite an evening with a number of notable attendees. Former US Defense Secretary William Cohen was in the audience and posed a question during the debate. Brian Mulroney was there as was Canada's current Minister of Foreign Affairs, John Baird.

Poor Mr. Baird was minding his own business, having a night off, but I couldn't resist the opportunity to accost him to ask what he thought about The Sea Hitler. He's intelligent and good humoured, and I could practically see the thought bubble appear over his head saying. "here we go...on the clock again." But he was adamant in his distaste for the effort by Canadian Islamists and radical leftists to break Israel's arms embargo of Gaza. I referred to them as silly and he corrected me, calling them `dangerous` and added a few other choice words.  But I had brought a very attractive American academic I met at the Worldviews Conference on Media and Higher Education to the debate with me and Baird quite sensibly redirected his attention to her.

With Friday`s debate and the previous one with Tony Blair debating Christopher Hitchens over religion, the Munk Debates series has established itself as one of Toronto`s premier intellectual happenings, and whatever the next one offers should be fascinating.
Posted by Richard K at 12:52 AM

So it was really Fareed that kicked butt as opposed to Henry!

Fareed definitely knocked in the winning run, Jim, but Henry was the team anchor during most of the game!