Thousands of Muslims rally against free speech in Toronto 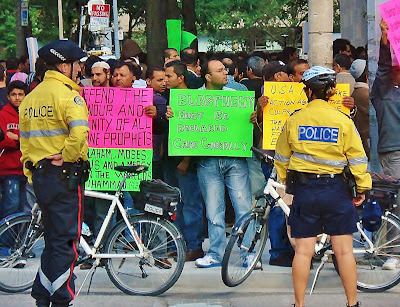 In the public square beside the Ontario Superior Court building, across the street from the US Consulate in Toronto, about two thousand enraged Muslims exercised their right to free speech this afternoon to call for that same right to be deprived to anyone who mocks their religion. 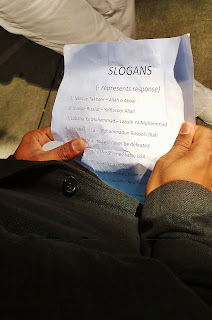 If the gathering and the speakers looked familiar, it's with good reason. The speakers, the organizers and much of the crowds were made up of the exact same people responsible for the anti-Israel al Quds Day hate fest in Toronto last month. In fact, despite the professed excuse of demonstrating against a low-budget YouTube video that denigrates the founder of Islam, Mohammed ibn Abdullah,  the rally was clearly an excuse for local Islamists to vent their unrelenting hatred of the United States and Israel. That neither of those countries` governments had anything to do with the film was of course immaterial to them.

The chants were the same as you would hear at any rally where local radical imam Zafar Bangash, who spoke at today`s rally, spews his hatred. For the benefit of anyone whose English or memory for simple expressions of mindless fury isn`t quite up to par, the organizers were thoughtful enough to distribute sheets with the chants printed out. 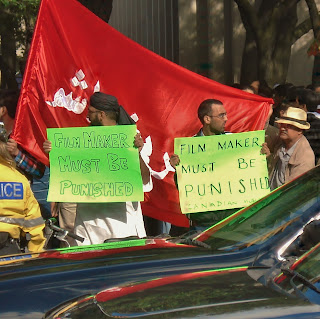 The only difference with today`s angry throng was, aside from the usual invective against western democracies and promotion of crazed Zionist conspiracy theories was the call for censorship and punishment of those who insult Islam. Among the swarm of grubby, bearded men and veiled women were signs calling for the silencing and punishment of those who mock a long-dead tribal chieftain they believe to have been a prophet. The area resembled a huge outdoor mosque for about an hour as profession of love of Mohammed combined with heavily accented chants of  ``Shame, shame USA!`` and ``Shame, Shame Israel!`` filled the air.

A cute female RCMP officer guarding the outside of the consulate I was trying to flirt with laughed when I said to her, ``this must be very...routine.`` But though the anger and slogans were, in an ominous way, the message was different. Today wasn`t just about Muslims hating the west, it was about them trying to stifle western freedoms from within.

UPDATE - Check out the sanitized mainstream media reports that avoid the overwhelming hate and craziness that characterized the rally today.

Blazing Cat Fur has coverage too 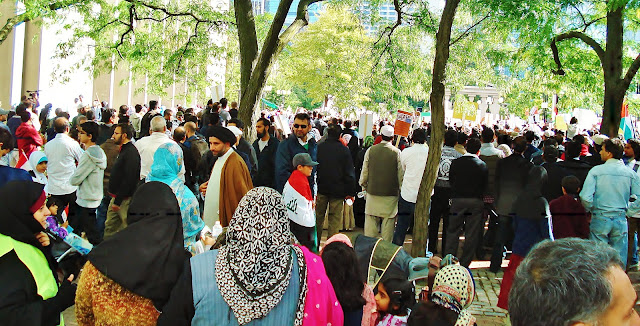 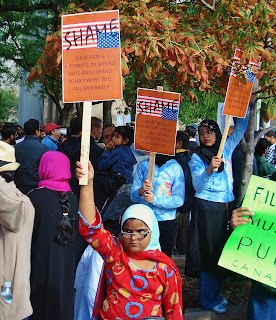 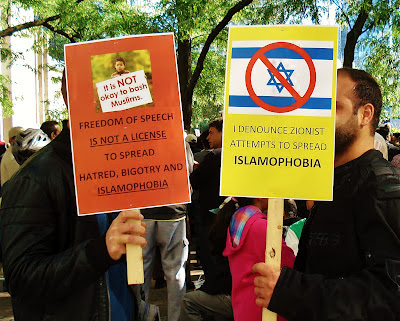 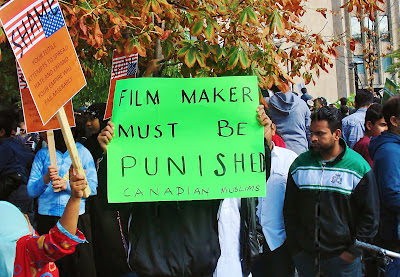 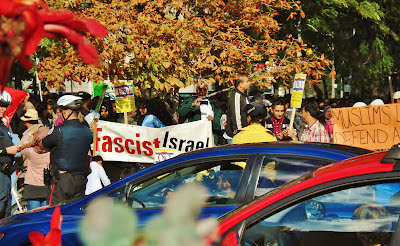 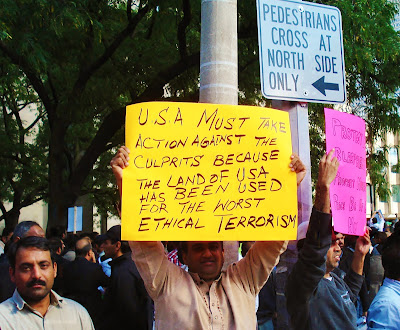 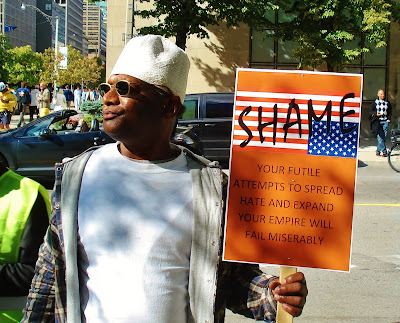 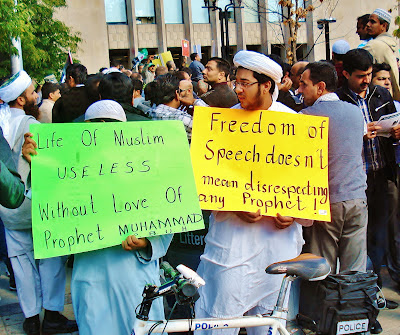 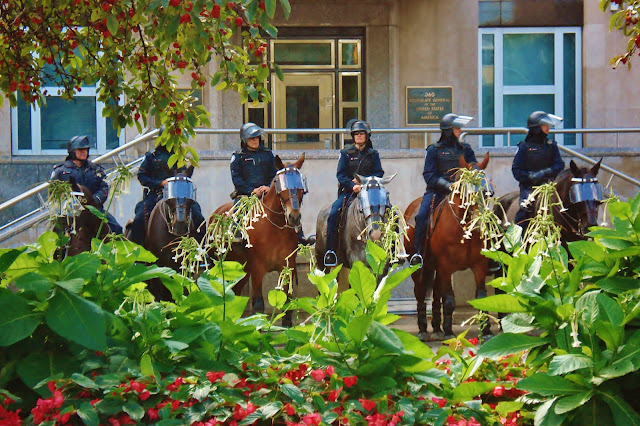 Nice pix - especially like the one of the cavalry thru the foliage.

Oh, and f*ck these people. The moment we accede to a single one of their demands is the moment we lose.

Thanks Rick and agreed - free speech is not something we surrender because it enrages some medieval-minded religious fanatics. The frightening thing is there are more than a few useful idiots prepared to do just that.

Oh yes, I've read threads at the silly Wondercafe forum on "hate speech" and it's got plenty of advocates. Even ones bragging that Canada doesn't have a First Amendment.

I don't post there anymore, just go back to read. They've left the topic of the riots pretty much alone, preferring to have endless discussion on their church's partial boycott of Israeli goods.

Thank for reporting on this!

I'd like to see Muslims with signs and slogans protesting and denouncing honour killings and the wholesale slaughter of other Muslims, Christians, etc. committed in the name of their faith inside predominately Muslim countries of the Middle East, Africa and South Asia. Why do we never see Muslims gather to denounce these films?

According to thestar.com, there were approx. 1500 Muslims attending this rally who want to take our freedom of speech and thus our ability to speak the truth about the pedophile, mass murderer, rapist Mo away from us. It is about time we began discussing stopping Muslim immigration to Canada.