Gee, is it possible that the only people really outraged about  unproven media allegations against Toronto Mayor Rob Ford are the usual suspects and the media?


A rally calling for Toronto Mayor Rob Ford to resign took place a city hall on Saturday, but failed to get the numbers promised.

More than 3,000 people pledged to join the rally. But in the end only about 100 showed up at Nathan Phillips Square to demand Ford step down.


It's sure beginning to look that way

UPDATE: For those questioning the numbers, here's a picture of the protest at its height. There aren't many more than a hundred people here and a big percentage of them are media covering the event. 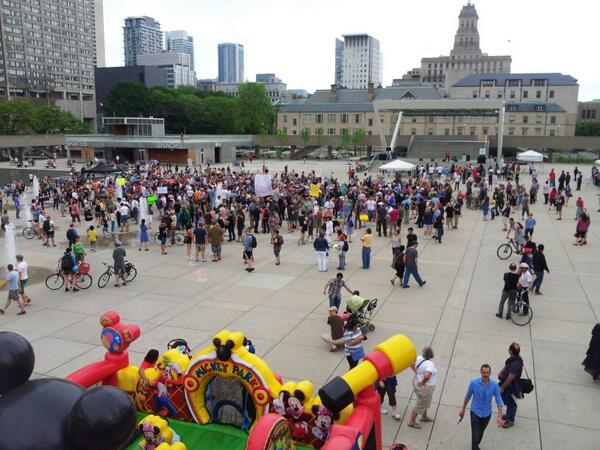 A lot of the folks in the photo are just tourists and visitors to Nathan Philips Square, who did not come to protest.

A standard "activist" tactic for protests is to hold them where there will be a lot of people (such as tourists) anyways.

The protest will attract the curious to bolster your apparent numbers which you can use as propaganda to prove you have greater support than you do.