While collaborating with Holocaust deniers who persecute Gays, Queers Against Israeli Apartheid wants your tax dollars

The term "pinkwashing" as applied to Israel by the radical, anti-capitalist activists of Queers Against Israeli Apartheid presupposes that Gay influence and power is so momentous that a democratic nation would alter its legal and social dynamic just to mollify it.

For a Gay person to maintain that idea, they would have to be narcissistic to the point of being delusional. 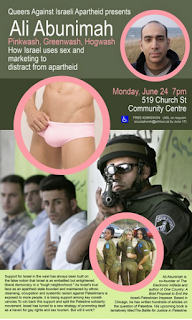 One may as well claim that Canadian laws which recognize Gay marriage and prevent discrimination against Gay people is part of a grand design  to deflect charges that Canada is an "apartheid country" that practices genocide against its native population.

That suggestion is so absurd it sounds like an attempt at parody.

But that delusional narcissism informs the lie that the vapid hatemongers of Queers Against Israeli Apartheid are trying to sell.

And what makes the lie all the more hypocritical and shameful is that Queers Against Israeli Apartheid tries to maintain a pretence of being a human rights group when they are nothing more than vicious hatemongers. Of course that is nothing new. The neo-Nazi Ernst Zundel also claims to be a `human rights activist,`` so in that vein, Queers Against Israeli Apartheid are in the same league.

While professing to care about Palestinian rights, they ignore abuses of Palestinian rights all throughout the middle east and focus solely on Israel. Not coincidentally Israel is the only country the Palestinian leadership has threatened and launched attacks against. The only national movement for self determination in the world Queers Against Israeli Apartheid condemns is Jewish self-determination, making the implication of their overt anti-Semitism obvious.

This would be laughable except for the fact this hate group has the support of Toronto City Councillors like Kristyn Wong-Tam, Gord Perks, Sarah Doucette , Janet Davis, Mike Layton and Maria Augimeri.

At Toronto`s Executive Committee last month, one of the Queers Against Israel  proclaimed offense at her group being compared to Nazi collaborators.  They are exactly like Nazi-collaborators.

Queers Against Israeli Apartheid is a Gay group that has turned up at rallies that showed support for the Iranian regime that tortures and murders Gay people for the mere "crime" of being Gay.

Some of the spokespeople for Queers Against Israeli Apartheid, participated in Zafar Bangash`s Khomeinist Al Quds Day rally last year, holding banners in support that announced their hate of Israel,

The event was created by the Holocaust-denying regime in Iran for the purpose rousing support for the destruction of Israel and the imposition of Iranian-style Sharia Law in Israel. The same laws by which Iranian Gays are imprisoned and killed.

In a speech last year, the avowed Khomeinist Bangash declared that Iran`s leaders `represent the true values of Islam today. They make us proud of Islam!`

The pride Bangash speaks of would result in the participants of Toronto`s Pride parade being hung by the neck from lamp posts.

In order to manifest their pathological hate of Israel, an ideology that would murder their own kind is what Queers Against Israeli Apartheid have bound themselves with. So too have a faction of despicable municipal politicians.

This Tuesday, Toronto`s City Council votes on whether they will amend the the city`s Anti-Discrimination Policy to preclude funding for an event that includes participation  by the lying bigots of Queers Against Israeli Apartheid.

If you live in Toronto, it might be worth letting your Councillor know what you would think of them if they decide to support an event that serves as a platform for a group tied to murderous hate.

Up until the 1980s, the International Socialists kicked out members they discovered to be gay because, in line with their Stalinist paymasters, they regarded "homosexuality" as a "bourgeois vice." Many gay people in my university days complained about the "corporatization" of Gay Pride but the most truly offensive thing I ever saw at a march (pace the more colourfully arrayed anatomy so troubling to some) was the sight of International Socialist signs as these fascists co-opted the problems of the same men they had just finished persecuting.

They hate the United States. And that's it.

The ersatz revolutionaries of the Left are actually nineteenth century COUNTER-revolutionaries against human liberty and the rights granted by God and articulated through the genius of the American revolution.

In this light, their authoritarianism, anti-Semitism, agrarian utopianism, generalised Luddism, etc. are all latter day expressions of the medievalism overturned first by Magna Carta and definitively by the Constitution of the United States.

And, in this light, it is no surprise this same Left should hate Israel, a beacon of the Enlightenment, intellectual and religious freedom, technological progress, personal liberty necessarily paired with personal responsibility and - not incidentally - the rights of the same women and minorities of all kinds not least of which the gay people they falsely claim to represent.

It is no accident the Left will support literally any dictatorship so long as it furthers their own power and satisfies their pathological hatred of individual freedom. Hence their most recent alliance, this with the exquisite medievalism represented by sharia "law".

These aren't strange bedfellows, these are two sides of the same coin.

There's also a hatred of capitalism, which, as an economic system also provides opportunities for individual liberty that socialism and communism crush.

The US is the symbolic as well as the actual archetype of contemporary capitalism. Israel as an ally of the US and an "outpost of western capitalism" as they call it, is an irresistible target for those imbeciles.

I wonder how many of them are actually gay.

I find the original QuAIA domain registration data at
http://www.scribd.com/doc/99110035/Kristyn-Wong-Tam

very interesting. It sure contradicts Wong-Tam's claims of having no connection to QuAIA at the same time she repeatedly votes to support them. This is a clear and obvious conflict of interest but the city's Integrity Commissioner refuses to investigate it while looking for every excuse to go after Rob Ford.