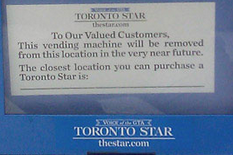 We live in times where the affirmation of fabulism is considered normal. So it's no wonder that principle guides everyday editorial policy at The Toronto Star, the socialist dinosaur of Canadian newspapers. What else could explain their description of Scott Vrooman as a "comedian?"

You probably have never heard of Scott Vrooman, nor have I until this week. But in a world where a founder of "Queer Theory" can proclaim that the genocidal, homophobic, misogynist terror groups Hezbollah and Hamas are part of the global, progressive left, why shouldn't an untalented hack like Scott Vrooman, who is about as funny as an ISIS beheading, lay claim to being a comedian?

To get a notion of the hilarity of Scott Vrooman's comedy, imagine Green Party leader Elizabeth May taking another of her drunken, sanctimonious stabs at humor, but instead of being drunk, she's dead sober, and instead of Elizabeth May, it's a whiny beta-male.

The Star made a video of Vrooman's "comedy,"in which he very seriously accused Israel of being a nation of child killers and whined about how awful it is that all Canada's major political parties support self-defense for the only liberal democracy in the middle east. Specifically, Vrooman railed about Israel's most recent military action against Hamas after that terror group incessantly bombarded the Israeli civilian population with missiles. The tone of his idiocy would be similar to that if in 1944, someone had decried the "barbarism" of Britain and the US and the terrible devastation caused to the Germans without once mentioning Nazism, or Hitler, or anything Germany had done up to or during the Second World War to cause retaliation against it. Who knows? Perhaps Vrooman takes comfort knowing that his position on Israel lines up precisely with those of the apocalyptic, theological nut cases running Iran.

Not exactly our generation's Bob Hope.

More likely, the next squirrel to appear in your garden will be more of a comedic genius than Scott Vrooman, possibly will stink less, and certainly will be less inclined towards making stupid declarations. But at least this time, The Star wasn't trying to pass off the biases, distortions and outright falsehoods in Vrooman's video as reporting.

This time it was opinion. Because The Toronto Star recently has become unusually sensitive about being caught out in lies. Not that it minds printing lies as fact. It does that with alarming frequency for something calling itself a newspaper. It just doesn't like to be caught flat-footed, with irrefutable proof against it when it lies, as it had just about a week ago.

The Star's "Social Justice" reporter, Catherine Porter, was simultaneously protesting and reporting at a Climate Change rally when she encountered Rebel Media's Ezra Levant, a conservative skeptic about anthropogenic climate change theory. Porter decided to use her child as a prop in an article she wrote about how terrible and mean Levant was to her child and other activists, thus of course discrediting all Global Warming skeptics as irredeemable meanies who bully children.

But what Porter wrote isn't at all what actually happened. In fact, Levant was cordial and affable with protesters Porter claimed he was "belittling." Rather than being mean to her daughter, Levant was polite and gentle. Levant did, however, ask the senior Porter questions about her participation at the rally and in the process exposed her as a hypocrite, ill-informed about an issue on which she had taken a very strong stand.

While infuriated that the outcome of her encounter with Levant didn't match her expectations, Porter decided to alter events and lied about Levant in her published column. Porter's article was an invention that suited what she would have liked to have occurred rather than what did occur.

How do we know that Catherine Porter lied about her and her daughter's encounter with Levant?

Because he video taped it.

In fact, she was even aware that Levant's Rebel Media cameraperson was taping the interview. In a mealy-mouthed explanation she wrote after Levant exposed the lies she told in her article, Porter explained that it was a bad decision to talk to him with the camera taping her. That is remarkably revealing. Why would it be a bad decision to talk to a fellow reporter when a camera is on? When you end up lying about what you said.

The Star's Public Editor wrote a column in which she partially defended Porter and partially criticized the lack of accuracy in her column. But do you really think even that equivocal repudiation would have happened if Porter's work of fiction had involved someone of less prominence than Levant who didn't have video evidence?

I've witnessed politically-motivated lies coming from The Star on other occasions. I was in Rob Ford's office, conducting an interview with him while he was running for mayor in 2010, when The Star broke a story accusing him of assaulting a high school football player.  Ford had to repeatedly interrupt the interview to take and make calls trying to locate the alleged "victim," so he could refute the slander. The Star's story about Ford having assaulted the student was a complete lie which the supposed victim later publicly confirmed. But because Ford was someone The Star's editors despised, they felt it was OK to lie about him without properly verifying the story, and it was never formally retracted.

I was at a pair of rallies on subsequent days a year ago, one anti, and the other a pro-Israel rally. The Star's reports of those two rallies were total distortions of what happened at them. Rather than honest reporting, they were propaganda items trying to spread their biases against Israel.

One such example was last year's "al Quds Day" rally, an anti-Semitic event created by Iran's Ayatollah Khomeini, calling for the destruction of Israel, at which Khomeinists were advocating for another Holocaust of Jews and proclaimed explicit support for terror attacks. It was organized by notorious hatemongers and the speakers were a series of  terror-supporting Islamist extremists and vicious, radical leftists.

Incredibly, in reporting that event, The Star managed to avoid all mention of "al Quds Day" or Khomeini in an article about an al Quds Day rally put on by Khomenists celebrating Iran's deceased dictator. The Star's report intentionally ignored the blatant Jew-hate, the calls for Israel's elimination, or a major, five-minute melee that occurred when about three dozen Khomeinists violently attacked some of the counter protesters. In fact, anything that might cast the hateful anti-Israel protesters in an accurate light was intentionally omitted from The Star's report. The following day, a pro-Israel rally was held, with speakers including Members of Parliament and prominent, pro-peace community leaders. Yet because of a minor scuffle involving three people that that lasted less than fifteen seconds, one of whom was taunting the largely Jewish peace rally with a Nazi swastika, The Star deceitfully characterized the entire event as violent with the headline "Violence erupts at pro-Israel rally at Queen's Park."

There can be no real justice without truth. But "Social Justice," or at least The Toronto Star's version of it, relies more on invention than fact, and that isn't justice at all. It's one of the reasons trust in the mainstream media is at an all-time low, and confidence in the veracity of The Toronto Star's reports are even less than that. And it's why scepticism of the media and alternate sources of information are vitally important.

Hear-Hear ... this kind of expose must be hear loud and clear....

Nice piece about lies that appeared in Toronto star and that
Kathy English Public Editor at the star rightly condemned Porters piece and questioned her parenting skills.

She says that Porter lied in her column. And among other things was a bad journalist.
I don't know if she still works there but she shouldn't. She is not a journalist even opinion columns require facts

When Ezra Levan wrote that George Soros was a Nazi collaborator as a youth for Sun Media, Did Sun media editors write a column condemning him for lying? I haven't found one. Love to be pointed to where it is.

Sun Media did admit that the columnd lied and retracted and apologized for the Levan column. They did this because George Soros threatened to sue them for Libel.
Sun Media had enough money for a court case but they did part of the right thing by admitting that Exra Levan Lied.
They didn't use their outlets to condemn his lack of journalistic ethics, or the fact he lied. As far as I know

Thank you for exposing the lies that appeared in the Star, and the fact the public editor admiited they were lies and bad journalism. it didn't even take the threat of a lawsuit.
Bravo sir!