The luscious boobs of Femen demand something or other... sorry, I wasn't listening... 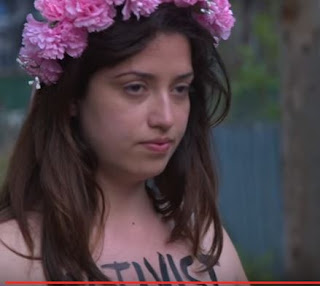 Nothing makes me want to re-evaluate the oppression of the patriarchy more than the topless, shrieking activists of Femen. We live in a country where there are no abortion laws and the procedure is paid for by government health care plans, and that's a status whose quo isn't in any danger. But nonetheless,  I'm glad Femen is so concerned about abortion rights in Canada that they have written pro-abortion slogans on their breasts, aureoles and nipples and need to make sure we see those slogans. And I'm especially glad all the Femen activists are apparently between the ages of 21 and 30, which is the prime age for the medium they've chosen to convey their message.

Fine, I admit it. I never listen to them, but I am a big fan of the medium.

And seriously - ask anyone who has seen a Femen demonstration what it was that they were protesting, and most people assume they're just really, really enthusiastic about the "Free the Nipple" movement.

Femen poses a slight dilemma. I'm generally contemptuous of nutcase activists, but to every rule, there is an exception, and most of Femen's demonstrators have nice tits.

Winning out over any of my possible objections, the attention-seeking exhibitionists of Femen have discovered a way of being appealing idiotic activists by delivering a message that you can ignore while enjoying the way they convey it.

Now, if only someone could figure out a way to get them to protest at my local bar during happy hour...

Check out the Femen story at YouTube
Posted by Richard K at 9:00 AM