CBC News yesterday has been force-feeding the public an item about a Conservative candidate in Winnipeg South having compared abortions to the Holocaust and 9/11 in a 2009 YouTube video.

The comparison may be absurd to many, but at least the Conservative knows what the Holocaust was, which is not a claim Hamilton NDP candidate Alex Johnstone could have made last Monday.

"After apologizing for making a penis joke about Auschwitz, a Hamilton NDP candidate says she didn't know what the notorious Holocaust death camp was until the controversy erupted.

"Well, I didn't know what Auschwitz was, or I didn't up until today," Alex Johnstone said in an interview following a candidates' debate Tuesday night... "


Johnstone is been Vice-Chair of the Hamilton-Wentworth School Board and has been a school Trustee for the last five years. By any measure of decency, Johnstone's comments were exponentially worse than those of Conservative candidate Gordon Giesbrecht. But more troublesome is how such a tremendous ignoramus as Johnstone could have been in a position of authgority over a major school board. 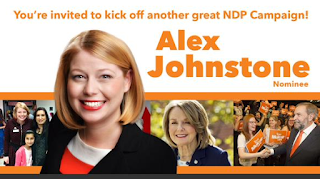 Troublesome but not surprising, since she is indicative of the NDP's modus operandi. They NDP uses municipal politics the way baseball teams use farm clubs. But with a difference. The NDP stacks the deck in their municipal candidates' favor, often with illegal or dodgy campaign spending and by busing in paid union operatives to work for whoever the NDP wants in office.

Once in as a local candidate with some name-recognition, the NDP will, at the earliest opportunity, try to move them up to the provincial or federal level.

But the quality of these candidates is typically abysmal. Many of them are evident imbeciles, like Alex Johnstone, histrionic fanatics like Hugo Chavez groupie Linda McQuaig, or borderline anti-Semites. It's one of the reasons the NDP didn't want a long election campaign; so that the utter incompetence of their candidate slate might stand a better chance of not coming to light.