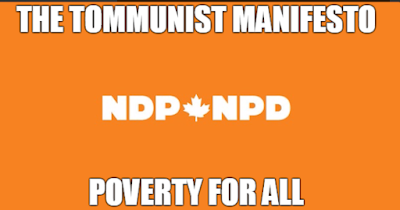 If you don't know who Naomi Klein is, imagine if Noam Chomsky were twenty-five years younger, had a sex change and significant brain damage, and that pretty much completes the picture.

Yesterday Klein and a collection of imbeciles from the NDP released what they call their Leap Manifesto.  Named after Mao Ze Dong's Great Leap Forward, a communist social engineering project which exterminated 50 million innocent people, the manifesto completely undermined NDP leader Tom Mulcair's pretense of being capable of responsible stewardship of Canada's economy.

Dubbed by critics,  The Tommunist Manifesto, it was a call for an upheaval of capitalism and massive taxes so that the working classes would not actually have to work, but could be given a guaranteed base income. How that will be paid for when the people who get taxed to death to permanently subsidize the non-working classes decide to abandon Canada for safer environs is anyone's guess. Ironically, a number of the signatories to The Tommunist Manifesto are idiot celebrity millionaire expats like Ellen Page, Pam Anderson and Donald Sutherland, who has lived and paid taxes outside Canada for so long, he's lost his Canadian voting privileges.

As if on cue, the day after the Great NDP Leap Forward was proclaimed, Tom Mulcair announced his plan for a hike in Canada's corporate tax rate if he's elected.

Mulcair would bring Greece's economy to Canada if elected. His caucus would welcome that development, as his senior shadow cabinet member Niki Ashton, who wanted Greece to reject its austerity plans, recently reminded Canadians. A Mulcair government would be the economic death of Canada. But what does that matter to the preening celebrity morons who signed The Tommunist Manifesto but won't be affected by it? They abandoned Canada long ago.

He has repeatedly ranted against all mining and oil and gas extraction in Canada, saying that we can substitute the economic benefits with the new internet economy.