Out of respect for the right to free speech, this sort of thing shouldn't be banned by law. But you'd imagine out of a sense of a commitment to truth, if not of decency, the University of Toronto would know better than to host an event featuring the demented antisemite, Ken O'Keefe.

On April 28, O'Keefe was featured at a grubby little bunker called "Beit Zatoun,"  a hub of anti-Israel activism in Toronto.

The following day, he delivered a speech at The University of Toronto. Watch the video below and you'll see a man whose head is clearly filled with paranoid delusions and frizzled mental wiring claiming the Holocaust was a "myth," part of a Jewish conspiracy to oppress the Palestinians. He essentially says that Jews have conspired to control and oppress everyone. His unbalanced ravings are more hateful and idiotic than anything Mel Gibson ever said when plastered on tequila. But O'Keefe was dead sober when he spewed them out, as these are claims he frequently makes when speaking in public. His warped interpretation of history is that Hitler wasn't responsible for exterminating six million Jews, but instead was punished for bypassing "Jewish banking debt." O'Keefe's insanity extends to conspiracy theories about childhood vaccines, 'chemtrails,' and the CIA creating ISIS. 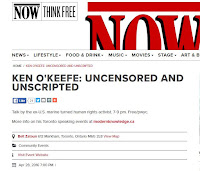 This happened with the acquiescence and, by allowing it to take place unchallenged at one of its lecture facilities, the imprimatur of The University of Toronto. It's worth noting that this Holocaust-denier has incurred the praise of the NDP-affiliated, neo-Marxist website rabble.ca. O'Keefe's Toronto events were promoted by the so-called "progressive" magazine, NOW. Interestingly, a NOW editor notoriously has said that she is in favor of censorship, which one might presume is a counter-intuitive stance for a real journalist. NOW editor Susan Cole said universities are not the place for "provocateurs" who "target minorities." More interestingly, Holocaust denial and overt antisemitism evidently don't qualify as an example of hate speech for them. In fact, NOW referred to the Holocaust-denier O'Keefe as a "human rights activist."

When people talk about the Regressive Left, O'Keefe and his leftist Toronto supporters are what it looks like in action.

This is what things have come to for them. 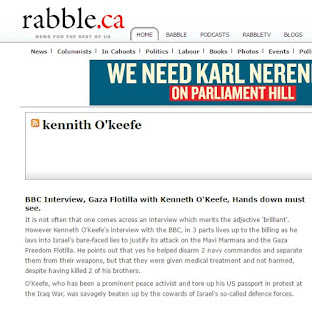