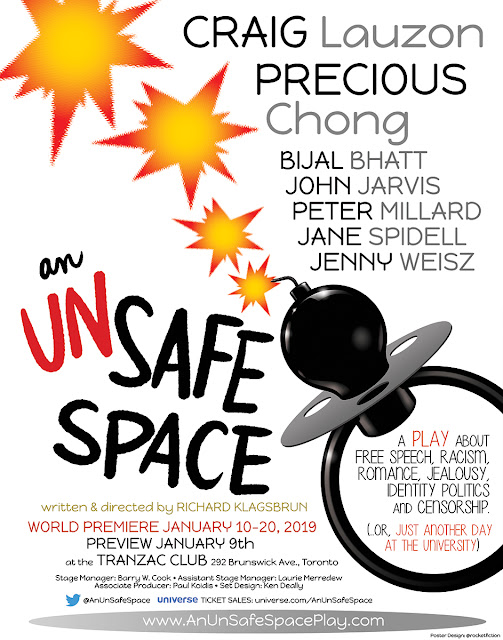 Anyone who is interested in these types of issues should definitely see An Unsafe Space, no matter which side of that argument they take. Because all sides will be given concepts to think about and discuss.
Free speech, censorship, and the ideologically-based suppression of ideas, as well as the stereotyping of people and their opinions based on their racial and ethnic identities, are among the hottest topics currently in the public sphere.
The comedic play AN UNSAFE SPACE, which will have its world premiere in Toronto on January 10, 2019, addresses these concepts in a biting, irreverent way that entertains while acting as a stimulus for people to think about and confront their preconceptions.
Inspired by an actual events at a major North American university, AN UNSAFE SPACE begins with a meeting of progressive academics who have gathered to find ways to foil a large donation to their department by a conservative benefactor.
The play takes place in the home of Joanna Whitney, a Political Science professor, and includes some of her colleagues, who also happen to be her friends. Joanna also had arranged to meet her new romantic interest, an aboriginal lawyer named Oliver Waterman, at the same time that the impromptu meeting is occurring. Rather than cancel her date with Oliver, curious to learn what his political stances are and how he interacts with her friends, Joanna experiments with letting her personal and professional relationships interact.
To the surprise and consternation of Joanna's colleagues, Oliver expresses strong opinions which contradict the expectations of what the academics believe a First Nations person would and should hold.
Romantic and professional rivalries and disputes, and the outrage that Oliver instigates at the meeting leads to clash after clash. The events leave the characters confronted with the unexpected necessity of having to examine their own outlooks and prejudices.
There is no other play that addresses the important issues discussed in AN UNSAFE SPACE in the same way.
At a reading of the play done at the Royal Manitoba Theatre Centre, one of the participants described it as "a smart play written for smart people." Darrell Dennis, the renowned aboriginal actor and playwright, who participated in the reading, said, "Thank you for writing this so audiences can finally see a play with an aboriginal lead who isn't a victim."
Upon reading the play, the nationally-syndicated columnist and radio host Andrew Lawton said of AN UNSAFE SPACE, "It's hilarious and delightfully irreverent. AN UNSAFE SPACE slays every sacred cow, taking no prisoners in the process. The play offers a tragically funny look at how the perpetually offended interact behind closed doors. It certainly won’t be appropriate for any campus safe spaces, but will be a must-see wherever it’s allowed."
Posted by Richard K at 11:27 AM No comments:

Stay tuned!
Posted by Richard K at 2:34 PM No comments: