Trump should crack down on UNRWA, finally end fiction of Palestinian ‘refugees’

As the UN General Assembly voted to reject America’s recognition of Jerusalem as the capital of Israel, US Ambassador Nikki Haley issued a stern warning: We’ll remember this the next time you come calling for more hard-earned American taxpayer dollars. Most nation-states called her bluff, leaving many to wonder what comes next.

If President Trump wants to use his financial leverage at the United Nations to strike at the heart of the anti-America, anti-Israel institutional infrastructure, he should look no further than the agency responsible for Palestinian refugees: the United Nations Relief and Works Agency.

By most definitions, refugees are those forced to flee their country because of persecution, war or violence. Nearly every refugee in the world is cared for by the United Nations High Commissioner on Refugees, whose ultimate goal is repatriation, resettlement and integration. The exception? Palestinian refugees.

Arab states insisted on a different definition for Palestinian-Arab refugees of the Israeli War of Independence — and a different agency to care for them. Today, millions of people are referred to as “Palestinian refugees” even though the only home they, and in many cases even their parents and grandparents, have ever known is either a refugee camp or an Arab host nation like Jordan.

Rather than use the billions of dollars of international assistance provided since 1950 to resettle and integrate Palestinian-Arab refugees — just as Israel successfully resettled and integrated Jewish refugees from the Middle East, North Africa and the Soviet Union — UNRWA’s mandate has always been to keep Palestinians as perpetual refugees...

The rise of the terror amnesia industry

2017 might prove to be the year we caved in to terrorism. The year we accepted that the occasional act of Islamist barbarism, the occasional mass stabbing of Saturday-night revellers or blowing apart of girls at an Ariana Grande concert, is just something that happens, like bad weather. It was the year in which our response to terror was not anger, far less ‘Blitz Spirit’, but a collective sad-face emoji. ‘Don’t look back in anger’, we said after the horror in Manchester, perfectly capturing the defeatist, self-silencing, emotion-policing nature of our attitude to terror today.

In 2017 we witnessed the rise of the terror amnesia industry – an informal but effective effort by the political class and opinion-forming set to shush serious discussion about terrorism; to tame strong emotions post-terror; to make people forget, in essence, the latest bloody destruction of their fellow citizens, or at least stop thinking about it. ‘Don’t look back…’

This Orwellian encouragement of forgetting, this cultivation of emotional passivity in response to radical Islam, this top-down demonisation of concern about Islamist terror as a species of ‘Islamophobia’, is the reason why even something as horrific as the Manchester attack, the targeting of our next generation, of girls, does not live in the collective memory in the way it ought to. The speed with which the Manchester horror evaporated from the national consciousness was one of the most disturbing political events in Britain in 2017...

The Death Rattle of Obama’s Reputation

The members of Barack Obama’s administration in exile have become conspicuously noisy of late—even more so than usual. Former CIA Director John Brennan accused Donald Trump and his administration of engaging in “outrageous,” “narcissistic” behavior typical of “vengeful autocrats” by threatening proportionate retaliation against countries that voted to condemn the United States in the United Nations, as though that were unprecedented. It is not. James Clapper, Obama’s director of national intelligence, all but alleged that the president is a Russian “asset.” Perhaps the most acerbic and incendiary series of accusations from the former Democratic president’s foreign-policy professionals were placed in the New York Times by Obama’s national security advisor, Susan Rice. In her estimation, America has abdicated its role as a “force for good.”

It’s no coincidence that these overheated condemnations accompany abundant evidence that the Trump administration is finding its legs. As the last administration’s undeserved reputation as sober-minded foreign policy rationalists is dismantled one retrospective report at a time, its jilted members are lashing out...

...When the majority of the American media failed in their coverage of the presidential election, they had to find some excuse for their massive incompetence. The New York Times, with all their resources, and after two full years of daily coverage of the campaign, was nonetheless projecting Hillary Clinton’s chances of victory at a full 92 per cent on election night itself. That was at least better than the pathologically anti-Trump HuffPost, which had Hillary’s chances set at a modest 98 per cent! Such was the state of American journalism, these companies barely allowed for the mere possibility that Trump could win. Under their professional eye, he was just a sideshow, even in the very hours before he actually won.


These two—the Times and HuffPost—can stand for a large set of the American press, both traditional and online. Their reading of the American election was the greatest journalistic failure—the largest act of group incompetence—in decades. This failure fostered the need for some excuse for how they got so much so wrong.

They couldn’t just step out honestly and say: “Hey, we despised this guy so much that it really warped our thinking and twisted our coverage, blocked out what we didn’t want to see. We were so mad at him we could not see.” That would have been the truthful and honourable thing to do. So, obviously, it was not adopted. Instead, the answer they did come up with, quickly and conveniently enough, was Fake News...

Congressional Republicans on Thursday demanded action and sought more information following a POLITICO report that the Obama administration derailed a law enforcement campaign against drug trafficking by the terrorist group Hezbollah as former President Barack Obama sought to secure a nuclear agreement with Iran.
Sen. Roger Wicker (R-Miss.) urged President Donald Trump to reinstate a task force to combat illegal activities by Hezbollah in the U.S., and he called on the Justice and Treasury departments to investigate the matter.
Reps. Ron DeSantis (R-Fla.) and Jim Jordan (R-Ohio), both members of the House oversight committee, called for the Department of Justice to hand over by Jan. 8 all documents related to interference with law enforcement efforts against Hezbollah. They also asked Attorney General Jeff Sessions to brief the oversight panel's staff by Jan. 12.
The POLITICO investigation found that a campaign dubbed Project Cassandra was launched in 2008 to monitor Hezbollah's criminal activities after the Drug Enforcement Administration discovered evidence of drug and weapons trafficking and money laundering by the group. But participants in the task force said the Obama administration created roadblocks, saying officials at the Justice and Treasury departments delayed or rejected requests for approval for some investigations, prosecutions, arrests and financial sanctions...
Posted by Richard K at 10:40 AM No comments:

'Is That True or Not?': Tucker Presses Former Obama Official on Hezbollah-Drug Trafficking Report

The secret backstory of how Obama let Hezbollah off the hook 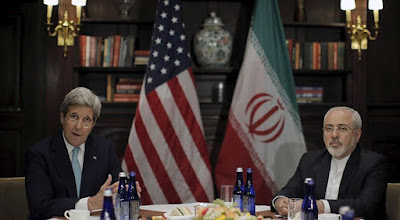 In its determination to secure a nuclear deal with Iran, the Obama administration derailed an ambitious law enforcement campaign targeting drug trafficking by the Iranian-backed terrorist group Hezbollah, even as it was funneling cocaine into the United States, according to a POLITICO investigation.
The campaign, dubbed Project Cassandra, was launched in 2008 after the Drug Enforcement Administration amassed evidence that Hezbollah had transformed itself from a Middle East-focused military and political organization into an international crime syndicate that some investigators believed was collecting $1 billion a year from drug and weapons trafficking, money laundering and other criminal activities.
Over the next eight years, agents working out of a top-secret DEA facility in Chantilly, Virginia, used wiretaps, undercover operations and informants to map Hezbollah’s illicit networks, with the help of 30 U.S. and foreign security agencies.
They followed cocaine shipments, some from Latin America to West Africa and on to Europe and the Middle East, and others through Venezuela and Mexico to the United States. They tracked the river of dirty cash as it was laundered by, among other tactics, buying American used cars and shipping them to Africa. And with the help of some key cooperating witnesses, the agents traced the conspiracy, they believed, to the innermost circle of Hezbollah and its state sponsors in Iran.
But as Project Cassandra reached higher into the hierarchy of the conspiracy, Obama administration officials threw an increasingly insurmountable series of roadblocks in its way, according to interviews with dozens of participants who in many cases spoke for the first time about events shrouded in secrecy, and a review of government documents and court records. When Project Cassandra leaders sought approval for some significant investigations, prosecutions, arrests and financial sanctions, officials at the Justice and Treasury departments delayed, hindered or rejected their requests...
Posted by Richard K at 8:00 AM No comments:

It's not easy being a Funkhouser

The documentary discusses the perspective that goes against politically correct orthodoxy that states that kids who are too young to cross the street by themselves and can't yet tie their shoelaces can determine their gender identity when it conflicts with their sex.

There may be extreme cases where it is merited, but in most cases, pre-pubescent medical intervention in these cases is a result of the politicization of medicine, and is a type of child abuse.

CBC was going to broadcast it, then chickened out.

This panel critical of the UN was based on an idea I proposed to Moses Znaimer.
After it was over, someone I know stormed out, muttering about it being a talk by "right-wing fascists."
Which is ironic, since the promotion of genuine democracies and decrying the usurpation of the UN by dictatorships was the whole point of the discussion.

Trump's bizarre superpower: he causes his enemies to destroy themselves

From the great Andrew Klaven:

(CNN) President Donald Trump outlined his intentions to move the US embassy in Israel to Jerusalem in a call with President Mahmoud Abbas Tuesday according to Palestinian Authority spokesman Nabil Abu Rudeineh.

The Palestinians said that Abbas warned Trump in the call against the dangers of such a step and added that he would continue reaching out to world leaders to prevent it from happening. Neither the White House nor the Palestinians offered details on the timing of an embassy move, which previous administrations have delayed indefinitely.

Despite strong pushback from US allies and concerns about the safety of US military and diplomatic personnel in the region, Trump is insisting that he fulfill campaign promises about Jerusalem...

The Making Of THE PARTY