Fight back against politically-correct extremism and support Andrew Lawton

There aren't many, if any, countries in the world that are better than Canada to be a gay person.

It's not just that our Supreme Court has ruled that Gay people should have marriage rights and that most of our anti-discrimination laws prohibit discrimination against a person on the basis of sexual orientation. Beyond that, homophobia has become as socially unacceptable as racism, and the mere accusation of it is sometimes enough to devastate the reputation of the accused.

In Canada, we're well past the Seinfeldian "not that there's anything wrong with that," disclaimers and have come full circle to where it's politically and socially advantageous to be gay. Hell, I'm ready to come out of the closet, and I was never in it.  At the Pride festival last summer, I was waived past a line-up into a crowded club while two beautiful women standing beside me were kept outside, and inside gay bars, I've been bought drinks by men trying to ingratiate themselves to me. I'm not gay, but with privileges like that available, why would I want to volunteer the embarrassing and disadvantageous admission that I'm straight?

As far as I'm concerned, that's all very positive progress. I've written before that not only is gay marriage something we should tolerate, but something we should all support, because it's good for everyone in society. In fact, the only gay wedding I'd be opposed to is one without an open bar.

But we've also fallen into a deplorable trap. Because being seen as pro-Gay is considered a badge of "progressiveness," a typical gang of insecure, vacuous characters now fall all over themselves to form witch-hunting mobs seeking out the slightest perceived heresy.

The latest victim of this narrow-minded intolerance and totalitarianism-of-thought is my friend Andrew Lawton, who hosts a radio talk show on London, Ontario's AM980.

Andrew, in reaction to a group trying to demonize London as being hostile to the gay community, which he considered both false and a slur to his town, wrote something that was distorted and leaped upon by hysterics trying to portray him as a "homophobe."


"Emerging Leaders used a push poll to try to paint Londoners as intolerant of the LGBTQ community.

Number of sexual-orientation motivated hate crimes in Canada per year: 185

Number of HIV/AIDS infections from men having sex with men in Canada per year: 1450

Who is the real enemy?

It may have been clumsily expressed, but Andrew is not anti-Gay and what he wrote are facts.

His point was not homophobic. Indeed, it was the opposite, that Canada in general, and London, Ontario are bastions of tolerance and we live in a society that is so tolerant that statistically, a gay man is in more danger from being harmed by another gay man than from becoming the victim of a hate crime. Even so, Andrew publicly apologized for the way he expressed himself on facebook.

However, because of an orchestrated campaign, Andrew has been suspended from his show.

Andrew Lawton is an outstanding radio host, who gained national attention just a few days before his facebook comment from an interview he did with Liberal Party leader Justin Trudeau.

Unlike other interviews that Trudeau has faced, Lawton asked detailed, tough questions, which analysts on all sides of the political spectrum acknowledge was not a "gotcha" inquisition, but in which Andrew insisted on getting complete answers. The interview proved to be a serious failing for Trudeau in which he floundered on his responses to Canada's role in fighting the Islamic State terror group. It's even been speculated that the Liberal party's support for the Conservative government's new Anti-Terror Bill was a result of trying to mitigate Trudeau's poor performance on Andrew's show.

That has made a lot of people very angry at Andrew and they have been looking for a chance, any chance at getting revenge, and distorting Andrew's facebook remark proved to be it. 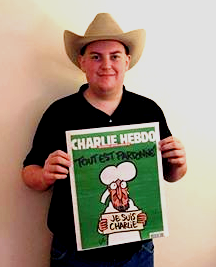 The irony of this is that these people so outraged and Andrew's inadvertent offence are remarkably silent about actual murders of gay people in the Islamic world, or the overt homophobia that is promoted in virtually every mosque in Canada.

It is an absolute disgrace that AM980's program director Nathan Smith capitulated to the witch-hunt that sought to burn Andrew at the stake.

Andrew's show is described as "Canada's most irreverent radio talk show." The bosses at AM980 should be aware of that, since Andrew would say it following just about every other station break. Perhaps the people who run AM980 aren't actually aware of the meaning of "irreverent," so I'll help them out with its dictionary definition, which is, "showing a lack of respect for people or things that are generally taken seriously."

In my books, that pretty much equals cowardice and hypocrisy on the part of AM980.

But I could be wrong. After all, a radio station is a business, and there's no profit in offending advertisers and listeners.

However, by suspending Andrew, they may have done just that.

You can email Nathan Smith at: nsmith@am980.ca

Update: Just so you have an idea of the type of hypocrites and weirdos who are braying for Andrew's blood, here's one of his most vociferous detractors on Twitter: 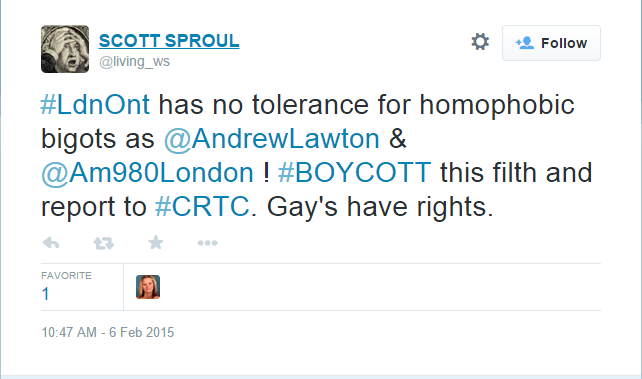 Get that?  According to Scott Sproul, Andrew Lawton is a bigot for his facebook remark about facts regarding the ratio of hate crimes directed against gay people versus the gay HIV infection rate. If he had worked in my shop he would have been congratulated. Best talk show in town OR a lot of other towns for that matter.
Ed Wilmott
FORMER News Director 1290 London

Come on Nathan, you've got to have have bigger balls than that!!! Stand up for your people. It may get you fired but at least you"ll sleep at night!

One possibility may be that Corus Entertainment, the parent company, has been going out of its way to become more milk toast and more to the left on the political spectrum, at least here in Alberta. They may have been waiting for an excuse to get a rid of Mr. Lawton as he does not fit their desired political viewpoint.

At least that has been the Alberta Experience with most all of the right of center hosts being sent packing in the last couple years.

"I'm not gay, but with privileges like that available, why would I want to volunteer the embarrassing and disadvantageous admission that I'm straight?"

-- that's a good point. if I was gay I'd be dining out on affirmative action so hard. How many thousands of dollars in scholarships in Canada are open to LGBTQWERTY people only?

I'm glad he is suspended. He is the biggest anti-islam person I come to know and one comment against gays got him suspended. Just great

Best damn radio Show in London...intelligent views on lots of topics the others won't touch...It would be a shame to see his voice quietened, and the station bowing down to corporate BS ...so now we're left with Craig and Devin...? They only operate in Andrew's shadow .... bring him back....or I'll just leave it on 1410 or Andy on 1290 all afternoon.... and I won't patronize any of the sponsors on 980.

It seems to me that the Andrew Lawton haters, are using the same bullying and harassment techniques of the anti-gay monsters of the 70's. They should remember that equal rights are EQUAL, and that they do not have exclusive access to them.
Every voice must be heard. Our fore fathers fought for it, and our constitution guarantees it.

I'm not devoted nor affiliated with any political party. I believe in keeping the freedom we have fought and died for. What happened to people using comman sense and forming educated opinions based on facts? Give this man his show back, and if you don't like something he says, call him up and let him know. I have two gay sons by the way, and I'm not offended.