Up for only an hour, my Progressive Conservative lawn sign was vandalized 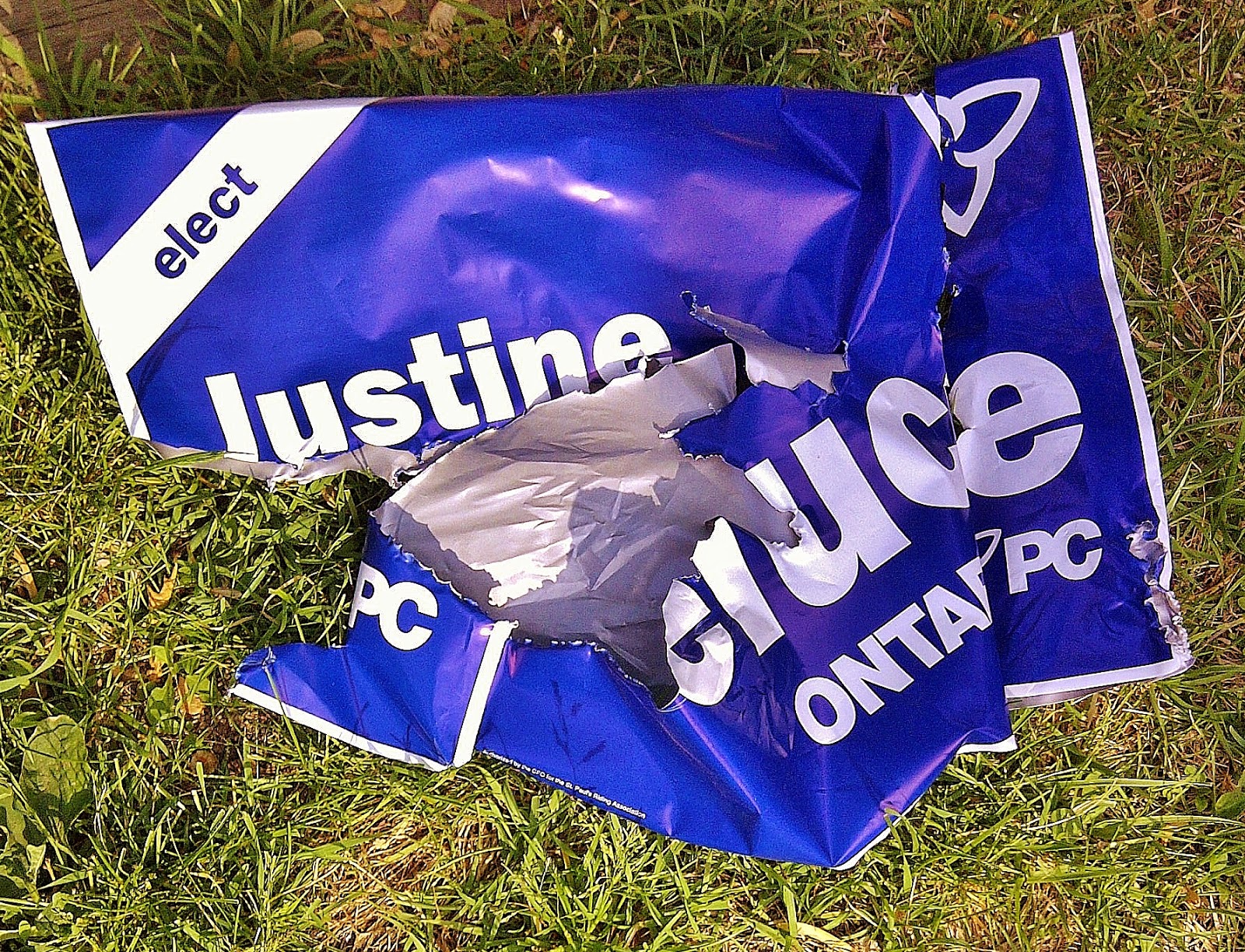 It only went up at about 3 pm this afternoon, and by 4 pm, my lawn sign for Progressive Conservative candidate Justine Deluce was intentionally destroyed.

The riding where I live, St. Pauls', is dominated by Liberal cabinet Minister Eric Hoskins. Hoskins is a decent guy, but he's part of the most corrupt, incompetent government in Ontario's history. The backlash throughout the province is such that the predatory public service union bosses feel threatened by tomorrow's election in a way they haven't felt in years. Whatever the level of enthusiasm that Ontarians may or may not feel for PC leader Tim Hudak, the incompetent, corrupt and occasionally vile government of Kathleen Wynne has soured most of the public towards her. But the one segment that would like to see her reelected are the union bosses to whom she has made promises that would put Ontario in the poor house for decades.

So far, I have yet to meet anyone fooled by Wynne's "made-in-Ontario" pension proposal. Her scheme to have a provincial pension plan would drive taxes up by about a thousand dollars per year for each taxpayer. And most people expect that Wynne's completely inept government wouldn't be giving retirees more money, it would raid the fund to pay the interest on the massive, unprecedented Ontario government debt.

In tomorrow's election, the choices are either Andrea Horvath's socialist NDP,  Kathleen Wynne's less competent NDP that calls itself "Liberals," and Tim Hudak's Progressive Conservatives. I'm ready to take a chance on the devil I don't know. Because the devil I know is far too destructive to give her any more time in power.
Posted by Richard K at 6:42 PM

Well said Richard, although I think you were much too kind to this despicable Liberal band of liars & thieves. They have systematically increased the size of Ontario's already bloated bureaucracy by 300,000 with inflated salaries, perks & pensions in exchange for their votes, all at taxpayers' expense.

This has been going on since McGuinty conned his way into power in 2003 with promises & lies to voters just to infiltrate all areas of the gov't, then he promptly did the opposite of everything he said he would and wouldn't do.

These corrupt power hungry psychopaths will stop at nothing to stay in power, without any conscience whatsoever about how it looks and how incompetent & clueless they are on every file. Everything they have touched has turned into $Billion boondoggles tripling the deficit and doubling the debt to nearly $300B with almost a $Billion being paid every month in interest alone! This is the 3rd largest file after Health and Education, already the highest of every other province in Canada.

Yet, astonishingly, these Liberals continue to shamelessly, recklessly overtax & overspend to keep up the charade, with Union bosses & goons calling the shots & pulling the strings on their political puppets

Those who continue to support this Liberal Mob, are as corrupt & greed driven as their gov't, who operate as untouchable communist dictators. They have morally and fiscally bankrupted this province, paying off every union & special interest group & corporation with the sole motivation of bilking taxpayers for as much as possible before being thrown out. Hopefully THIS time, they will be thrown right into jail cells following a Judicial Inquiry that exposes their fully corrupt & criminal operation for the past 11+ years.

I left Ontario over a decade and a half ago for a brighter future in Alberta and have never regretted doing so for a second. Alberta's Tories are a shadow of the Klein years - a tired, uninspired, mediocre government, and this province would have done well to let Danielle Smith's Wild Rose Party have a term or two at the helm, but on their worst day the Alberta Tories are not even 1/100th as vile and corrupt as the Ontario Liberals. Alison Redford was shown the exit over a few hundred thousand worth of taxpayer abuse; the Liberals have stolen from Ontarians to the tune of Billions.

I sincerely hope Ontarians use some common sense and give Wynne the boot, but I sorely doubt they will. Unfortunately the "reds" - primarily union leaders - now have a chokehold on the province. When I left Ontario, they were at the start of a recovery under Mike Harris; unfortunately I knew that with the unions and special interests who run the province, it was not destined to last. I wish I was wrong.

You are thinking wrongly.

That will be corrected when you enter the Wynne reeducation camps run by Ben Levin, Tim McCaskell and OISE.

Then you will see the light!

Most people pay very little attention to politics. Whether it's little enough for Wynne to squeak back in is something we'll find out Thursday night. I hope the voters of Ontario aren't asleep at the switch and let her come back to completely bankrupt the province.

"Hoskins is a decent guy". Really? How can he be and be "part of the most corrupt, incompetent government in Ontario's history."?