For those interested in formal wear, The Suits of James Bond

There's a great little website combining movie trivia with wardrobe tips I happened upon the other day called, The Suits of James Bond.

It describes the various outfits worn by James Bond in the film series as portrayed by the different actors who played the world's most famous secret agent, with a particular emphasis on Sean Connery, who was undoubtedly the most stylish of them all.

Not only is Bond's fashion fashion style described in great detail, but also that of the villains, supporting characters, other on-screen spies, and occasionally the wardrobe of the Bond actors in some of their non-Bond films.

It contains wonderful, gem-like tips such as this: 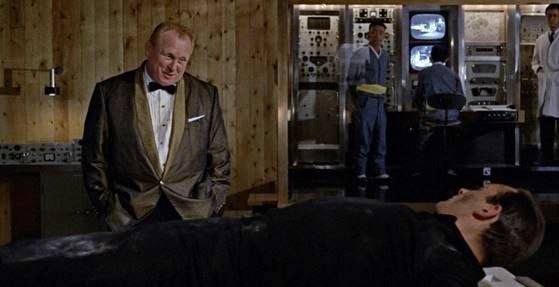 "A brown dinner jacket lacks the elegance of a black or ivory dinner jacket, but on the other hand it flatters Goldfinger’s warm autumn complexion more than the more traditional colours would. The gold shantung silk lapels bring Goldfinger’s favourite colour into the dinner jacket, and gold metal—or likely brass considering it’s only a film costume—buttons add another level of gaudiness to the jacket. Metal buttons would ordinarily make any jacket look like a blazer, but Goldfinger’s dinner jacket still looks like a dinner jacket since the gold buttons somewhat match the colour of the lapels."

I heartily recommend the site, which you can find HERE.