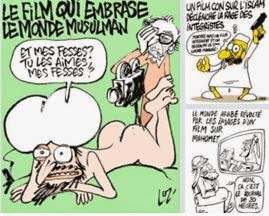 Most people identify as being a member of a religion because they were born into it. Muslims are no different and most Muslims are decent people. Most Muslims living in western countries don't even attend mosque with any regularity. But not all religions are the same and you can't disassociate the way a religion is practiced from what the religion actually is.

In the Dark Ages, Islam was generally more liberal and tolerant than Christianity in its practice. But that was 1000 years ago and things have changed since then. In the intervening millennium, Christianity has gone through reformations, a Renaissance and the Enlightenment and in the West, Christian countries have become largely secular.

The same cannot be said of Islam or those places where it dominates. If there are peaceful, evolved manifestations of Islam, they lie in the Ismaili, Baha'i and Ahamdiyya offshoots. But combined, those sects represent less than 2% of the world's Muslim population, there is no country where any of them form a majority of Muslims, and they are considered heretics and are frequently persecuted by their "mainstream" Sunni and Shia co-religionists.

Mohammed founded his religion, for which he borrowed heavily upon Judaism and Christianity, plus his own inconsistent inventions, as a means of united Arab tribes and leading them on his mission of conquest. It was a very successful basis for one of the most effective military and social quests of dominance in history. At its peak, the Islamic Empire was as large as the Roman Empire, and its power lay not only in military prowess but the subservience of its subjects to religious ideology.  "Islam" means submission, and though in theory it was supposed to be submission to Allah. Since Allah wasn't actually talking to Muslims, "The Prophet" and his heirs got to assume Allah's temporal authority.

It was and remains a brilliant means of total control. But the original purpose of Islam was conquest and domination, and in much of the Islamic world, nothing has changed since its inception 1400 years ago. In a great many mosques throughout the world, including in the west, Imams preach death to the enemies of Islam and demand its laws apply to everyone, everywhere. It's not coincidental that countries where Islam is the predominant religion are uniformly the worst, most oppressive, most intolerant places on earth.

Despite claims from Islamic proponents and their western useful idiot apologists that terror attacks by Islamists "have nothing to do with Islam," the fact that they are inspired by Islamic teaching and preaching would suggest the exact opposite to anyone who isn't an idiot or in a state of self-imposed delusion.

The waters of this evil tide have washed up again in France today as Islamic terrorists murdered at least a dozen innocent people at the offices of the satirical magazine Charlie Hebdo. Their offence was that they offended Muslims by publishing insulting cartoons of Islam's founder, Mohammed. Charlie Hebdo regularly insulted Jews and Catholics, as well as Muslims. But it was only the followers of "the religion of peace" who have attacked and murdered the magazine's employees because of that offence.

This had everything to do with Islam.

This is the direct result of the preaching and the proselytizing of a totalitarian, violent ideology by Islamic religious leaders.

It's easy to predict that in the aftermath of this atrocity, there will be calls for "tolerance."

Yes, we should be tolerant of individuals. We need to be tolerant of people who are Muslim, most of whom are honorable and good. But we should absolutely not tolerate this ideology of hate and violence that pervades Islam.  Nor should we continue to bury our heads in the sand about what contemporary Islam really is.

Until Islam learns to adapt to the modern world, we have no obligation to be any more tolerant of it than it is of us.