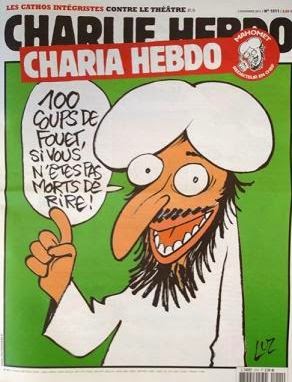 The internal staff email chain began with a Jan. 8 email from Al Jazeera English’s executive producer Salah-Aldeen Khadr, asking his reporters to interrogate whether the attack on the Charlie Hebdo newspaper was “really an attack on free speech” and whether the slogan “Je Suis Charlie/I Am Charlie” is “alienating.”
Describing the incident as a “clash of extremist fringes,” Khadr was highly critical of the Charlie Hebdo staff:

Defending freedom of expression in the face of oppression is one thing; insisting on the right to be obnoxious and offensive just because you can is infantile. Baiting extremists isn’t bravely defiant when your manner of doing so is more significant in offending millions of moderate people as well. And within a climate where violent response—however illegitimate—is a real risk, taking a goading stand on a principle virtually no one contests is worse than pointless: it’s pointlessly all about you.

If a large enough group of someone is willing to kill you for saying something, then it’s something that almost certainly needs to be said, because otherwise the violent have veto power over liberal civilization, and when that scenario obtains it isn’t really a liberal civilization any more….liberalism doesn’t depend on everyone offending everyone else all the time, and it’s okay to prefer a society where offense for its own sake is limited rather than pervasive. But when offenses are policed by murder, that’s when we need more of them, not less, because the murderers cannot be allowed for a single moment to think that their strategy can succeed.

Doha-based reporter Mohamed Vall wrote that supporting Charlie Hebdo ran the risk of encouraging more killings. “And I guess if you encourage people to go on insulting 1.5 billion people about their most sacred icons then you just want more killings...