Getting it wrong, as he almost invariably does, "journalist" Glenn Greenwald used his platform in The Intercept, the hysterically anti-Israel, anti-American policy website bankrolled by eBay founder Pierre Omidyar, to equate the promotion of anti-Semitism with the free speech issues surrounding the Charlie Hebdo massacre.

In what even for him was a remarkable display of ignorance and stupidity, Greenwald trying to make some point about how Charlie Hebdo was racist:


"Some of the cartoons published by Charlie Hebdo were not just offensive but bigoted, such as the one mocking the African sex slaves of Boko Haram as welfare queens (left). Others went far beyond maligning violence by extremists acting in the name of Islam, or even merely depicting Mohammed with degrading imagery (above, right), and instead contained a stream of mockery toward Muslims generally, who in France are not remotely powerful but are largely a marginalized and targeted immigrant population."

However, again, Greenwald simply was demonstrating his own ignorance rather than making a pertinent observation. Max Fisher at the Vox described how Charlie Hebdo's...

"jokes usually play on two layers. In this cover, the second layer has to do with French domestic politics: Charlie Hebdo is a leftist magazine that supports welfare programs, but the French political right tends to oppose welfare for immigrants, whom they characterize as greedy welfare queens cheating the system.
What this cover actually says, then, is that the French political right is so monstrous when it comes to welfare for immigrants, that they want you believe that even Nigerian migrants escaping Boko Haram sexual slavery are just here to steal welfare. Charlie Hebdo is actually lampooning the idea that Boko Haram sex slaves are welfare queens, not endorsing it.
That's what's tricky about two-layer satire like Charlie Hebdo's: the joke only works if you see both layers, which often requires conversant knowledge of French politics or culture."

Greenwald asserted that Charlie Hebdo had some particular animus for Islam. For his insight, it would appear that Greenwald was relying solely on information gleaned from the anti-Semites and Islamists with whom he makes common cause so often. As Lliana Bird wrote in The Huffington Post:


Charlie Hedbo were leftists, some may even (be) anarchists and punks. They printed numerous cartoons which were anti racism/xenophobia; that mocked and satirised the far right as bigots and racists. As long time reader and Frenchman, Olivier Tonneau pointed out in his excellent article, The National Front and the Le Pen family were in fact their primary targets above all others. Next came bosses, politicians and the corrupt. Finally they opposed organised religion. ALL organised religion.

Despite what a simple check would have demonstrated to be false, Greenwald made the assertion that:


"it is simply not the case that Charlie Hebdo “were equal opportunity offenders.” Like Bill Maher, Sam Harris and other anti-Islam obsessives, mocking Judaism, Jews and/or Israel is something they will rarely (if ever) do. If forced, they can point to rare and isolated cases where they uttered some criticism of Judaism or Jews, but the vast bulk of their attacks are reserved for Islam and Muslims, not Judaism and Jews. Parody, free speech and secular atheism are the pretexts; anti-Muslim messaging is the primary goal and the outcome. And this messaging – this special affection for offensive anti-Islam speech – just so happens to coincide with, to feed, the militaristic foreign policy agenda of their governments and culture."

Well, not quite. As Lliana Bird also notes:


Judaism was frequently lampooned (a simple Google search will verify that). The Charlie Hebdo team were also very much pro-Gaza, and often fiercely critical of Israel's actions in the Israel-Palestine conflict. One series entitled 'One Commandment A Day: The Torah Illustrated by Charb' coarsely depicts Jews as contradicting their religious values in their interactions with Palestinians."Ne pas opprimer les faibles" ("Don't oppress the weak") is the title of a cartoon of a Jewish man firing an assault weapon into the back of a Palestinian woman. "Here, take that Goliath!," he shouts.

But let's say, for the sake of argument, that Islam was a particular target of Charlie Hebdo. Why would such a thing be? Perhaps because of the world's major religions at this point in time, more violence is perpetrated in the name of Islam than all the others combined? But more importantly from the perspective of maintaining free speech, it was Islamic fanatics, not Jews or Christians, whom Charlie Hebdo frequently mocked, who threatened to kill them for doing it. Under those circumstances, it is particularly important to stand up to such threats. It was that courage that cost so many of Charlie Hebdo's staff their lives, and it was the cowardice of so much of the rest of western media to do the same that made Charlie Hebdo such a singular target.

And that's why reprinting those cartoons now, not just as an act of defiance, nor just of solidarity is so important. To do it when people were killed for having done it is a reaffirmation of the right of free speech.

Remarkably, as if it were some act of courage or integrity, of which it is neither, Greenwald thinks that the best way to assert his free speech in the wake of the Charlie Hebdo murders by terrorists is to publish a series of anti-Semitic cartoons.


"When we originally discussed publishing this article to make these points, our intention was to commission two or three cartoonists to create cartoons that mock Judaism and malign sacred figures to Jews the way Charlie Hebdo did to Muslims. But that idea was thwarted by the fact that no mainstream western cartoonist would dare put their name on an anti-Jewish cartoon, even if done for satire purposes, because doing so would instantly and permanently destroy their career, at least. Anti-Islam and anti-Muslim commentary (and cartoons) are a dime a dozen in western media outlets; the taboo that is at least as strong, if not more so, are anti-Jewish images and words. Why aren’t Douthat, Chait, Yglesias and their like-minded free speech crusaders calling for publication of anti-Semitic material in solidarity, or as a means of standing up to this repression? Yes, it’s true that outlets like The New York Times will in rare instances publish such depictions, but only to document hateful bigotry and condemn it – not to publish it in “solidarity” or because it deserves a serious and respectful airing."

The only real point that Greenwald makes by all this is that he is a hateful idiot and that his webzine, which exists only because it is funded by a doltish Internet billionaire, is pathologically obsessed with demonizing Israsel and those Jews who support it.

In the wake of this, there are not, nor have their been calls for the death of Greenwald or the cartoonists he admires, like the anti-Semite Latuff. Most cartoonists don't draw the anti-Semitism Greenwald sees fit to promote because after 6 million dead Jews in the Holocaust, murderous anti-Semitic attacks throughout contemporary Europe, one of which occurred in France right after the Charlie Hebdo massacre, and calls for a genocide of Jews from Islamic leaders throughout the middle east, where anti-Semitic propaganda is a media mainstay, there's no need to prove his asinine point.

Greenwald doesn't get the enormous difference between something not done because it is socially reprehensible and economically self-damaging compared to something which is not done out of fear for one's life.

It's standing up to that fear, and for the right of free speech, that made Charlie Hebdo's staff courageous, and shows up Greenwald's cowardly posturing for what it is.

Here are some of the cartoons that Greenwald posted, which do need to be seen. Not because I agree with them, but because people should see what sort of vile hatred he thinks is worth promoting to show how "progressive" he is.  And no one is threatening Greenwald's life or rights because of it. 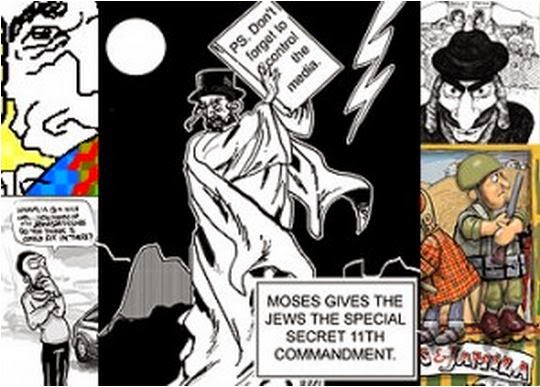 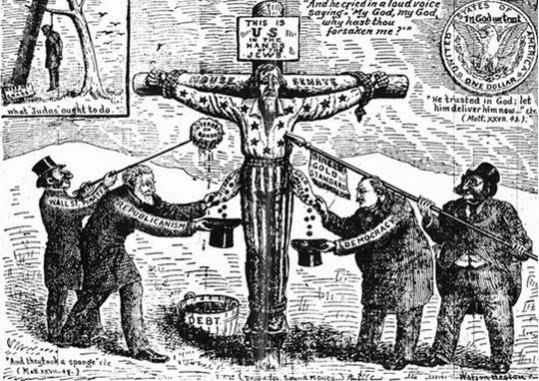 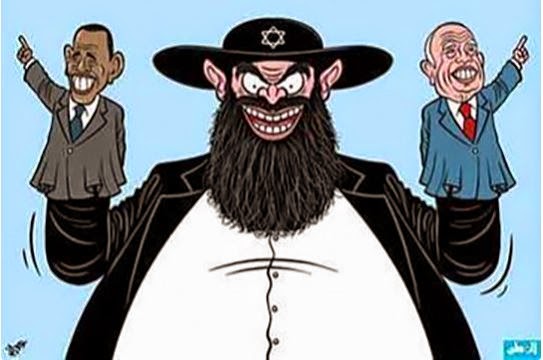 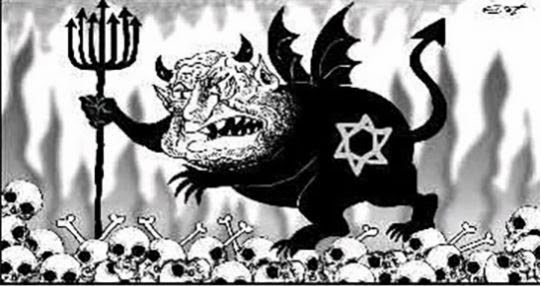 Thanks for this article. I posted my own reply to Greenwald's obtuse article at 'The Intercept', but the moderators, er, intercepted it. As on the Guardian's CiF, Glenn Greenwald, the champion of free speech, has a lot of people who are very sensitive to criticism of their hero. I merely pointed out, as you have done, that Greenwald's 'argument' was cowardly posturing because he knew full well that he was taking no personal risk in posting those anti-semitic cartoons. He's a bullshitter, and a blowhard.

On top of that, almost every article he writes on international affairs demonstrates that Greenwald the supposed scourge of American exceptionalism has a parochial understanding of the world and can't see it or discuss it except through the lens of an uninformed American who assumes that the world revolves around (Evil) America. Irony, eh?