Could Patrick Brown bring Ontario's Progressive Conservatives back from oblivion?

At the stodgy Albany Club in Toronto, a Conservative institution founded by Canada's first Prime Minister, a young Member of Federal Parliament spoke to a small gathering last night about his plans to revitalize Ontario's debilitated Progressive Conservative party.

A friend of mine who is a Conservative party insider commented recently that about two-thirds of the people he knows among Ontario Progressive Conservatives are working for leadership contender Patrick Brown and the other third viscerally hate him. I mentioned that over drinks to one of Brown's key advisers, the aptly-named former Senator Consiglio Di Nino (whose first name means advice in Italian) and he laughed and said, "well, that's a pretty good ratio." I can't disagree with him there, particularly when there are only two months left to sign up new members to the PC's who will be able to vote in the leadership election in May. 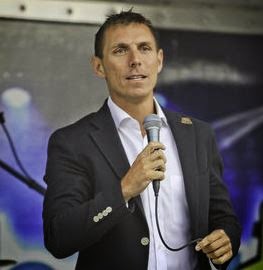 A recent polls in The Toronto Star placed Christine Elliott as the favorite to win the Progressive Conservative leadership, but that poll was meaningless for a number of reasons. Elliott, who came out on top, only did so with a relatively meager 27%, and that was likely based mainly on name recognition. But more importantly, the poll was taken among the general public, but it will only be members of Ontario's Progressive Conservative party, not the public, who decide the outcome, and among party members, the numbers are very different than those produced by the Star's Forum poll.

By most accounts, the energetic Brown has the best ground game going among the five candidates and has been signing up throngs of new supporters across the province. As Ontario's Progressive Conservatives only had less than ten thousand party members when the contest began, and with a one-member, one vote system, those recent additions could easily turn the tide in his favor if his rivals don't get their act together fast. As far as name recognition goes, a current lack of it among the public isn't an issue, since whoever becomes the next Provincial party leader will become instantly familiar to Ontarians as the main opposition to Kathleen Wynne's hopelessly incompetent Liberals.

Standing at a podium in a meeting room that date back to Victorian times filled with finely upholstered furniture, Brown delivered a speech about modernizing the party and it's easy to understand how he inspires both tremendous support and detestation within his party. All four of his rivals are sitting members of the provincial legislature and were part of the Progressive Conservatives who suffered another devastating loss to Kathleen Wynne last June.  Brown is the sole "outsider" among the candidates, and he highlighted the differences between the successful federal Conservatives, which as a member of their caucus he has been the MP for Barrie since 2006, and the vanquished Ontario PC's.

His goal is to shake up the party, to rebuild it, and to bring in new voices, and at the same time "burst the bubble" of the small clique who made abysmal decisions in the last two provincial election campaigns. Tim Hudak may have been an extraordinarily bad leader, but he didn't achieve his failures single-handed. He was surrounded by people who provided him with disastrous policies and as Brown put it, the Ontario Tories "should have won that election, but we scared people away from voting for us."

Running against the party establishment is probably the reason that Brown evokes such strong feelings against him by some, but that didn't concern the candidate last night. "I'm not going worry about being beholden to the people who lost us the last four elections, " he quipped.

Of the five declared candidates for the leadership, I've met four so far, and while all would make good leaders, Brown is certainly one of the most impressive. He's eloquent, very smart, telegenic, and gets the fact that drastic change is needed within Ontario's Progressive Conservative party.

Interestingly, Brown, like Lisa MacLeod and Chrstine Elliott, seems to favor many of the policy ideas proposed by fellow candidate Vic Fedeli. A sentimental favorite for many and unquestionably a great guy, Fedeli would likely make an outstanding cabinet minister, but an open question is whether he has the right stuff to win an election as party leader.

Lisa MacLeod may offer a strong alternative to Brown and Christine Elliott, who received an endorsement from former Toronto mayoral candidate Doug Ford last week. Other than my soft spot for MacLeod after she did a tequila shooter with me last week, she is bright, has good policy ideas, and is refreshingly frank and forthright, which is a quality Ontarians should demand from its next Premier. That's particularly important considering its current one has turned obfuscation into an art form.

Whether either Brown or MacLeod emerges as the next Progressive Conservative leader in Ontario, Kathleen Wynne will be facing a formidable foe in the legislature for the rest of her term, and in the next election.

Vic's a great guy. Charisma could be an issue.