The M-word that went unspoken at the Munk Debate 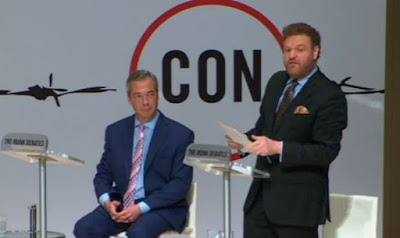 There has been plenty of reporting on last Friday's Munk Debate about the desirability of mass migration to the west by refugees, and the debate itself is available for free online viewing, so there's no need to repeat much in the way of details of what was said.

By way of a quick summary, the pro side, that favored opening the doors widely to just about anyone who claims refugee status, was represented by Louise Arbour, who is a former Canadian Supreme Court Justice and former United Nations High Commissioner for Human Rights, and the eminent historian and columnist Simon Schama. The con side was argued by the brilliantly acerbic author and broadcaster Mark Steyn and the famously forthright and witty politician Nigel Farage, who leads the United Kingdom Independence Party.

In essence, like so much else in the way of disputes over substantial geopolitical matters in our time that fall in the realm of what some call "social justice", the debate boiled down to one of emotion versus fact.

The pro side argued that accepting refugees is a matter of compassion, moral duty, and overcoming prejudice, while the con side presented fact after fact after fact that detailed the actual harm done by a significant subset of immigrants. Those facts, brutal and irrefutable, listed the increase in sexual crime, particularly rape, the inflicting of female genital mutilation, the increase in terrorism and violent acts, the homophobic assaults, and the actual ways in which women's rights are being eroded. All those effects are directly, demonstrably attributable to the accommodation of the cultural sensitivities of recent immigrants from countries from which we are now receiving refugees.

While these facts may have highlighted the actions of a minority of recent immigrants, they are facts nonetheless, and the response from Schama, and in particular, Arbour was a predictable emotional embarrassment. Since they couldn't refute the facts, the pro side resorted to personal insults, Arbour sarcastically referring to Steyn and Farage as "new-born feminists," and Schama suggesting that the con debaters were both obsessed with sex and are sexually frustrated.

Steyn's response to that attack was the most effective moment of the evening.

"I made a decision tonight that I wasn't going to do funny stuff, that I was going to be deadly serious, and I'm slightly amazed at our colleagues' ability to get big laughs on gang rape. Madame Arbour scoffs at 'the newfound feminists' over here. I'm not much of a feminist, but I draw the line at the three year-old getting raped and the seven year-old getting gang raped in a basement. And when Simon tells us we're all obsessed with sex;  maybe we don't get enough action in the Toronto's singles bars... rape is not about sex, whatever Simon may say;  rape is about power... It isn't funny!"

The scour on Arbour's face and the humiliation on Schama's revealed the depth to which Steyn's riposte had struck. While Steyn's fact-laced rhetoric had Arbour and Schama's pretense to moral superiority lying twisted and hemorrhaging on the floor, Farage delivered the coup de grace: "..We've lived through a hundred years of female emancipation and liberation and now we have the mayors of towns in Germany and in Sweden and in other parts of Northern Europe telling women not to walk out after dark on their own. And in the wake of the Cologne sex attacks, we had the mayor of that city telling women they really ought to dress differently and behave differently in public. That Simon, is what is sad, and I find the sheer hypocrisy of those of you who said you were going to defend female rights when actually you think migrant rights are more important than female rights in our community. Frankly, shame on you."

Arbour and Schama never fully recovered from that moment. Indeed, Simon Schama was embarrassed to the extent that he spent much of the rest of the evening trying to find common ground with his opponents, particularly about the fact that western democracies, particularly in Europe, have done a terrible job of assimilating Muslim migrants.

What was very surprising to me is that the primary cause of that failure of achieving Muslim assimilation was never explicitly discussed, or even mentioned during the debate.

No, that reason isn't only Islam, even though that religion does pose certain grave challenges to the west in its combined tenets of conquest, jihadism, misogyny, its often violent antipathy towards any other religion, its homophobia, and intolerance for dissent. But not all Muslims are religious and hold to those tenets, any more than you'll find most Jews refusing to turn on a light on Saturday or refuse to eat pepperoni pizza because it's not kosher.

The principal reason for the uniqueness of our inability to integrate great numbers of Muslim migrants is in large measure the west's own fault and can be summed up in one word: multiculturalism.

Islam's chauvinism combined with the moral and cultural relativism that accompanies multiculturalism have created a perfect storm of conflict that sets the stage for a maelstrom of violence and discord in countries adapting to massive Muslim migration.

Europe has been hit the hardest by its inability to assimilate large swaths of its Muslim populations while hamstrung by a political ideology that stifles criticism of that colossal failure.

Modern multiculturalism shares the same father as Canada's current Prime Minister. In the early 1970's, Pierre Trudeau ushered in a change to both immigration and Canada's national identity. Trudeau pere's policy of multiculturalism is now so ingrained in Canadians that most under the age of 40 take it to be one of the pillars of the Canada's national character. That of course is not saying much, considering most urban Canadians define their national identity in the minor ways in which it differs from America's. Similar to watching one twin brother insist he's nothing like his genetic doppelganger because of a few minutiae that distinguishes them ("He likes striped bow ties and I like polka dotted bow ties, so you see, we're nothing alike!"), so Canada, though it shares language and cultural, media, and historical influences with its conjoined twin to the south, is distinctly different in the minds of Canadians because they have a melting pot, and we have multiculturalism. Western Europe adopted Pierre Trudeau's plan with disastrous results and is only now beginning to admit its failure, possibly after the damage has become irreparable.

The multicultural approach creates a moral vacuum that attributes equal value to all cultures, and also is a bar to assimilation, since it encourages immigrants to maintain their native cultures rather than assimilate to their new homelands. During the debate, Louise Arbour insisted we should welcome the cultural changes immigrants will impose on Canada, although she was at a loss for an answer when asked by Steyn which aspects of Syria and Afghanistan's violent, homophobic, misogynist culture we should strive to make more of our own.

Multiculturalism throws more successful ideas of assimilation completely on their head. In the past, immigrants to the US and Canada would strive to adapt to, and be accepted within the establishment of their new country. Until about 50 years ago, it was that old, white, Anglo-Protestant establishment which would bar the way to entry in the upper social and business echelons for most waves of immigrants, be they from Ireland, Italy, China, or Jews from eastern Europe. Since the 70's, by conditioning Canadians to have a virtually ecclesiastic reverence for multiculturalism, in effect, there is a two-pronged attack on the values that had built up Canada since the time it was first colonized by Britain. On one front, multiculturalism teaches that all cultures are of equal value, thus diminishing the intrinsic value of Canada's culture while casting anyone trying to preserve it as a "xenophobe." On the other front, new immigrants not only have had their incentive to assimilate diminished, but they are actively encouraged to resist assimilation.

One of the reasons multiculturalism more or less worked in Canada up until now is that the countries from which Canada drew immigrants since the Trudeau 70's were not antithetical to Canadian values of tolerance, capitalism, and equality. South Vietnamese, Chinese, Jamaicans, Portuguese, Sikhs and even pre-revolution Iranians were not taught from birth to despise all westerners, and that Christians and Jews are morally corrupt, inferior infidels.

But something very different is happening in the madrassas and mosques of Pakistan, The Palestinian Territories, and today's Iran. In fact, messages of hatred for the west are frequently heard now in Canada, the US and Britain in mosques and madrassas set up by recently imported imams.  At the Munk Debate, Farage referred to a fifth column of 5000 terrorists ISIS claims to have embedded among refugees. That is a serious concern, but such concerns aren't limited to active terrorists. The term 'fifth column' may be a metaphor, but a fifth column of 5000 Muslim immigrants is literally visible in Canada every summer. Organized by anti-western adherents of Iran's depraved Ayatollah Khomeini, you can see 5000 Muslim fanatics march along Toronto's University Avenue on their al Quds Day, an annual event that expresses hatred of Western governments and calls for Israel's destruction. With its men separated from the head-to-toe covered, chador-clad women, the procession is a substantially more dour version of Thulsa Doom's death cult from Conan The Barbarian.

Naturally, terrorists and al Quds Day fanatics are not representative of all Muslim in the west. Most Muslims come here to improve their lives and that of their families. Many are exemplary citizens. Many Muslims in the west are actual heroes, like Salim Mansur, Tarek Fatah, Raheel Raza and Irshad Manji, who, at no small personal risk, speak out for free speech and individual rights with the same fervor as Steyn and Farage.

So while we should welcome immigrants in acceptable numbers, we should also screen them to make sure they are here to contribute to our society rather than to remake it as a copy of the dystopian places they left. And unless we're committed to the destruction of western culture, we should abandon the suicidal practise of multiculturalism before it completely rots the west from within.


You can read what Mark Steyn had to say about the debate afterwards HERE and HERE
Posted by Richard K at 3:26 PM

Thulsa Doom, not Tulsa. Other than that, more power to your elbow!

Thanks Tamarack, I changed that. So you're saying Conan didn't take place in Oklahoma?

Arbour and Schama exemplify perfectly the arrogance of the left. They have never actually listened to the arguments coming from the right, but instead have dismissed them as the unsightly and immoral ruminations of those less intelligent than them. They seriously underestimated Steyn and Farage, were unable to counter their arguments and so could not make a case based on reason. They deserved the egg on their faces for their smug condescension.

Thank you for that powerful cohesive argument, you are right up there with Mark Steyn.

"Principle" is always a noun that means a guideline or assumption, usually moral: I am a man of principle; the principle of charity, etc. "Principal" is a noun only in reference to the head of a school. Otherwise it is an adjective that means "main." I believe you wanted "principal."

Indeed I did, Semyr and thanks. I did actually know that, but crank these things out quickly sometimes (I do other things beside blog), so I very much appreciate when readers help out with proof-reading! It's now corrected.

Excellent article, Richard. Best explanation on why "Multiculturalism" not only does not work, but is guaranteed to fail, particularly when inviting a bloodthirsty enemy into the gates of your civilization.