The website Anti-Racist Canada is reporting that Michael David Rosenberg aka Mike Rza, a former leader of the "anti-Fascist" movement has been accused of being a serial rapist.

According to the website, the accusations surfaced in an online discussion group and included allegations of  rapes. Anti-Racist Canada also posted what is purported to be an online statement by Rosenberg which if true amounts to a confession of rape of a minor. 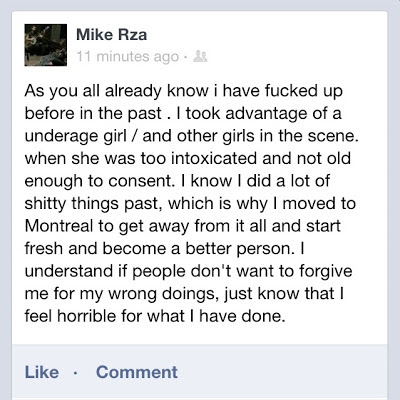 Part of this tragedy is the account the website relayed from one of the alleged victims, who wrote:I wish that I reported the rape sooner but I was scared of everyones' reactions towards me. I would of had more evidence to of convict him and then I wouldn't have to hear of another victim.

This sad situation may have in part been caused by a facet of socialist, far-left activist culture which discourages involving the police in sexual assault cases, as the authorities are viewed as "the enemy" and "agents of class oppression" by radical groups.

Fortunately, Anti-Racist Canada is behaving responsibly and encouraging anyone with pertinent information to contact police.

At least in my day, there supposedly was a "rape revenge" squad operating out of Kathedral B.

I am impressed by ARA's actions in this situation. Instead of the typical activistocrat tactic of criminalizing the victim they are acting responsibly. Even if they are not taking the moral high road they have at least learned that trying to bury these scandals only makes things worse. Good for them.

I think a "revenge squad" would require more organizational abilities than some of these cretins have these days.

ARA is a bit of a mixed bag from what I can tell, some of them are well-meaning and thoughtful and some are plain nuts. Of course you get that everywhere, but in their case, the type of overt, and really foul racism they formed to fight back in the old days is harder and harder to find, so now they have to grasp at straws to self-justify their continued existence.

I think you have a good grasp on what ARA is about. I have a friend who was with them and he was proud of the fact that he was considered a major enemy by local Neo Nazis. The thing is they did a good job and you do not see the Neo Nazis around this area anymore. For those in the organization who allowed ARA to become their entire identity I can imagine it would be hard for them.

They felt this distinction necessary after accusations of using ARA's violent tactics against folks deemed 'racist' appeared to contradict a second site sidebar.

Antifa.ca, in turn, claims to be an automated anarchist news aggregator, reposting info from Anti-Racist Canada and like sites.

'Anti-Racist Canada' was launched in 2007 with the announcement that they intended to provide information on 'movements that are a threat to the Canadian way of life'.

Foremost among such movements is the CPC, as attested by the most prominent 'Anti-Racist Canada' sidebar.

One is heartened to view this 'group of diverse but like-minded nutters' coming under closer scrutiny, as they have been a featured item on FreeDominion, grrr, since June 2009.

FYI The Anti-Racist Canada blog is not synonymous with ARA.

Mike had a small facebook page called ANTIFA NIAGARA, he was not some left-wing leader as you descibed him.

I don't usually censor comments, so will just expurgate this anonymous one that came in.

"i'm not surprised this nxxxxr lover raped a girl."

Richard I think you meant to say.
I am not surprised this parasitic marxist kike raped a girl.
Have a pathetic fruitless full of outrage marxist day!!!

What's even funnier about that richard is the fact that noone even said that on stormfront.
Oh well it isn't like it's out of a braindead leftists' character to either exaggerate the truth or flat out lie.

How can you say "kids these days" when you just stated that back in your day rape was so common that there was a "rape revenge squad"??

It's not a generational thing. It's a lack of morals.

The mysteries of the Internet may be hard to fathom for Nazi pinheads, but there is such a thing as software that reveals where links and originating URL's come from.

The comment I referred to was made by someone who came to the post through a Stormfront link, as did your two, "The Truth" - I assume your choice of moniker was meant to be ironic..or moronic.

I have to redact certain parts of a comment that just came in. As statements reported on the Anti-Racist Canada site are claimed to be from Mr. Rosenberg and if true, amount to a confession of rape, that can be repeated, but other unproven allegations will have to be excised:

As the above comment correctly states, this guy was no real leader or activist. He was a sketchy Johnny-come-lately who recently latched onto a cause in an attempt to make a name for himself. He didn't do anything of note within the anti-fascist movement.

Not sure if the arrest is the same person - the one named in the Niagara Falls Review is Michael Rosza, 24

It is the same guy. I have the misfortune I knowing him. He started hanging out in the 'punk scene' in Toronto and tried to be my friend for a while. I'm a 20 yr old female. I thought he was annoying and creepy and always blew him off. I'm glad I did. I'm sorry other girls I know were not so luckey. He came off as weird but harmless, I can see how some girls were tricked.

Just to clarify two or three things: Mike Rza has never been a fucking leader of anything except for a facebook page. And he got a taste of some street justice quite a few times, in Montreal at least.