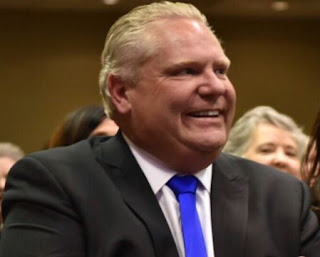 As Ontario nears its next provincial election, the political establishment is working itself into a panicked frenzy.

Premier Kathleen Wynne and her Liberal Party are so unpopular that it seems a near certainty that she'll lose on June 7, and will be replaced by the Progressive Conservative Party headed by Doug Ford.

Both Doug and his late brother Rob were the subjects of unprecedented media attacks while they served as elected officials in Toronto, Rob as mayor and Doug as a City Councillor and his brother's right hand man. Those attacks involved media stalking the Fords, inventing lies about them, and writing columns so histrionic that they did more damage to the credibility of the news outlets which published them than they did to Doug and Rob. The main motivation behind the attacks was that the Fords were populists committed to serving the actual public and not the city's well-heeled establishment and the special interest groups with which they work hand-in-glove.

Doug himself has been accused of being part of the 'elites' he decries. Indeed Doug Ford does come from an affluent family, but it was recent, self-made wealth by Doug Ford Sr. The Fords were never part of Toronto's established Old Boys Network. The business that Doug Sr started was built up to a huge, transnational success by Doug, who established a branch in Chicago as well as the home base in Etobicoke that is one of the continent's major label manufacturers.

I've come to know Doug pretty well in the last few months and I've come to consider him a friend. He's spent time at my home and we've had long talks about political philosophy, the direction Ontario, Toronto, and the country has been and is heading, the role of media, and all sorts of topics.

The establishment is worried to the extent that they're pulling out all the stops and spreading every lie they can think of to slander Doug before election day. And hearing those lies being told about a friend is somewhat upsetting, so I think it's time to set the record straight on a few of them.

An astroturf group which implausibly denies links to Kathleen Wynne's Liberal Party has been dishonestly implying, and in cases outright lying, about Doug being antisemitic and homophobic.

These are blantanty false accusations which are the opposite of the truth.

One incident, which I only recently recalled, is a particular example of how Doug went out of his way to fight antisemitism in Toronto when almost all of his then-City Council colleagues were too cowardly to do anything about it.

A few years ago, back in 2011, I was in contact with Rob Ford's office about the proposed use of city property to host an antisemitc hate fest known as Al Quds Day.  That annual event was created by Iran's despotic, homicidal Supreme Leader Ayatollah Khomeini to promote the genocide of Israel's Jews. These al Quds Day rallies routinely feature calls to violence against civilians and expressions of antisemtic hatred.

While most of City Council sat on their thumbs in fear of offending the Islamists behind Toronto's al Quds Day, Doug stepped up to the plate without a moment's hesitation. Fighting the City's bureaucracy, which contains a few unsavory, pro-Islamist people who are armed with a spool of red tape big enough to color the CN Tower crimson from top to bottom, Doug nonetheless did all he could to have the al Quds Day fanatics prevented from using a taxpayer-supported facility to spew their hate.

In the end, because of opposition by some of the entrenched, NDP-linked bureaucracy at City Hall, Doug was unsuccessful at getting the al Quds Day event removed from the City facility, but much to the Islamists' chagrin, had Toronto Police send an officer from the Hate Crimes Unit to monitor their malevolent jamboree, which forced them to moderate from their usual vicious bile.

Doug stood up for the Jews when the so-called 'progressives' at City Hall enabled or cowered in silence in the face of antisemitism.

As to Doug's supposed homophobia, the 'proof' offered by an asinine propaganda website operated by anonymous trolls relates to the complete distortion of something Doug said about an incident that occurred when a few protesters crashed a Ford Fest, a  big, multicultural barbecue put on by the Ford family every year. One of the anti-Ford protesters carried a sign upon which was printed '#1 Ford Hater." A couple of the protesters were wearing rainbow flags. The anti-Ford protesters were confronted by some Ford supporters and among the back and forth, regrettably, there were some anti-gay comments made by a couple of people.

In the aftermath of the kerfuffle at Ford Fest, Doug, who said and did nothing homophobic, and who was not in the altercation, nonetheless apologized for what those few Ford supporters did to the protester. He also reasonably noted that if people go to an event, even a sporting event, for the purpose of taunting people as the protesters did, the result, far from being surprising, is more likely exactly the attention the protesters wanted.

At the time, Doug observed, "you can't show up at a Yankees game with a Red Sox hat on" or in that instance, it's absurd to come to a Ford party for the purpose of trashing the Fords, and expect no trouble. That's just obvious logic. Characterizing that as homophobia by Doug, as the anonymous trolls at notdoug.com attempt, is a sleazy lie, just as disseminating sleazy lies and intentionally deceptive mischaracterizations is the purpose of that website.

As it happens, Doug has many friends in Toronto's gay community, has reached out to help them when they were in need, and had even donated $4000 of his own money to Toronto's Pride Festival. These are hardly the hallmarks of a homophobe.

From a long career in different aspects of media, including a major Hollywood production company which has won multiple Academy Awards, experience has taught me that the personalities of public figures as they present on TV are rarely precise representations of them in real life. But there are exceptions.

My friend Tarek Fatah is one who is very much in private the way he comes across in media, he's passionate, excitable, and deeply committed to the causes about which he speaks. Doug Ford is another case where the private and public person are basically the same.

The ways that the private Doug and the public one differ is that Doug's great sense of humor, his politeness, and the touch of shyness that is about him don't fully come across on TV. But the essence of the man is there and what you see with Ford is what you get. If he says something he means it, which contrasts with the politicians we're used to, and who spend more time trying to avoid telling us what they really think than they do in being straightforward. He's absolutely committed to doing good for his community and the people. Unlike just about every other politician I've ever met, Doug does most of that good without seeking publicity for it, taking satisfaction in having helped out the people who needed his assistance.

The Liberals cynically play the identity politics game pitting communities against each other while completely disregarding individuality or accountability. That was in plain display recently when Kathleen Wynne spoke about telling young voters that they have to vote to prevent old white people from deciding elections.

Compare that with Doug, who in explaining why he opposed al Quds Day fanatics from using City property to demonize Israel's Jews said he doesn't "believe city facilities should be used by one community to denounce another."

There's a stark choice in this election. Continuing with Kathleen Wynne's disastrous fiscal policies and cynically divisive Identity Politics from a Liberal government that believes it should be able to control every aspect of the lives of Ontarians. Under her administration, the overriding philosophy is that the people should be accountable to government.

Alternately, we have Doug Ford, who respects individual rights, and who believes that government's role is to protect people's freedom, and not to take it away from them. Doug will make sure government is fully accountable to the people, respects all of us, and will ensure that public servants are there to serve the public, not the other way round.

Take the chance to meet Doug if you can in this time leading up to June 7th. The real Doug Ford is not the person that most of the establishment media portrays. He's a good, decent, compassionate man and he will be a great, much needed Premier for Ontario.
Posted by Richard K at 7:30 AM

Rob is on the correct course with cancelling the "carbon tax". Wynne and the liberals keep on stating that the carbon tax is a tax on pollution.

The Ontario liberals have made many mistakes, now our electricity system is broken.

Lets get some people in charge that know what they are doing. Rob has signed thousands of cheques, he stands behind them and there is money in his account. Wynne has no clue on how to balance a cheque book, never mind provincial finances. Wynne is buying votes with your grandchildren's money. I have four grandchildren, I do NOT want them burdened with paying for today's "fair" hydro plan, or "fair" dental plan, or "fair" pharma plan. There is nothing "fair" about them when my grandchildren need to pay for them.

It's time for change. It's time for a leader who is welcoming to bussisness and stands for the people.. let's face it... the liberals have made small bussisness almost a thing of the past. This country was built on the backs of small bussisness. We need ontario to welcome back jobs.. create an environment that gets us back to work. Not chase employment over the border. We need to create a province where 50 % of our wages are takin in taxation. We need to stop these free pony gifts. I realize we will have some tough years ahead to fix this mess. I'm ready Doug. Let's do this.

My husband and I are going to Mildmay, On. tonight to meet Mr. Ford. we are looking forward to this event and hearing about thevision that he has for Ontario.