I didn't until last week, when Canadian media innovator and impresario Moses Znaimer got me to consider that possibility.

For each of the last 17 years, Znaimer has put on a 3 day conference called Ideacity, in which speakers talk about a wide variety of subjects with a particular focus, as the name suggests, on ideas that have or may come to have big influences on our lives.

It took place this year between June 15 to 17, and had a number of speakers who spoke about conventional subjects in a very interesting way. In that vein, Globe and Mail writer Ian Brown gave a hilarious, yet morbidly pessimistic talk about the perils of aging, and Soulpepper Theatre founder Albert Schultz provided compelling, intriguing insights into Soulpepper's unique and very successful artistic and business models.

But not everything at Ideacity is conventional.

Znaimer vets most of the speakers himself, and reflecting his intellectual, eclectic, and often esoteric interests, the topics range widely and in some cases, a little weirdly. And in other cases, very weirdly.

Science always plays a big role at Ideacity, since nothing changes the way humans live more than scientific discoveries and inventions. Nobel laureate physicist Art McDonald spoke about a neutrino observatory and geneticist Josef Penninger discussed the discovery of what appears to be a cure for osteoporosis and breast cancer. However, there was also some very weird science discussed. 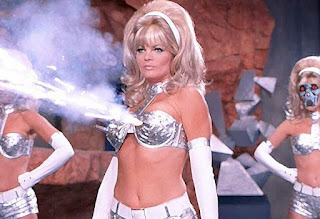 This year's Ideacity included a very serious debate about whether realistic Sex Robots should be banned. Really.

Why you may ask, of all the topics in the world, is use of sex robots something to be worried about? Even after listening to the debate, I have no good answer to that question. But it was a reminder that there there are some people, often sarcastically referred to as "Social Justice Warriors," who seem to live for no other reason than to find new ways to take the fun out of people's lives.

No, I'm not worried about someone taking away my sex robot. Not only do I not own a sex robot, I didn't even know they'd been perfected yet. You stop reading Tech News for a couple of days and the next thing you know, you miss out on all kinds of great stuff.  At least that's how it felt while I was listening to Kathleen Richardson, the head of the Campaign Against Sex Robots, passionately debate David Levy who is an advocate for the use of sex robots.

At first I thought the debate was some sort of joke. Listening to it in Toronto's Koerner Hall auditorium felt like being in a throwaway moment from a semi-serious futuristic movie, where a Sylvester Stallone or Bruce Willis-type hero would be chasing a sci-fi villain past a sex robots rights rally.

However Richardson was sincere if bizarre in her fervent opposition to a future in which people could have carnal relations with convincingly realistic automatons.

That anyone would be advocating for sex robots seemed to me a rather odd use of time as well, but as an intellectual exercise, I suppose it's at least understandable.

But to organize and campaign on this ridiculous issue outside of a debate forum sounds nuts.

And yes, for reasons that don't make sense to me, the Campaign Against Sex Robots is, in 2016,  a very real thing.

While the subject was fascinating, listening to the debate itself was frustrating.

Poor Mr. Levy falteringly did his best to make the case for sex robots. He quite reasonably took the position that sex robots would reduce, if not eliminate sex traffic and exploitation, since there would be no need for human prostitutes if realistic, Blade Runner-type sex robots could provide the same service.

He also made the case that for those people who have trouble forming human relationships, sex robots could provide a level of companionship and comfort they would otherwise not be able to find.

Unfortunately for Mr. Levy, his communication style is better suited to discussion than debate, and he lobbed a softball right over the plate for Richardson. He made the stupid mistake, insofar as debating tactics go, to suggest that sex robots made to look like young children could be a substitute for the real thing for pedophiles. Levy was certainly advocating the protection of real human children and against, rather than for pedophilia. But understandably, because of our instinctive revulsion towards them, once someone makes a case in a public debate that seems to enable the desires of pedophiles, they've essentially slit their own wrists.

In response, Ms Richardson pulled out every trick in the book and invoked a plethora of non sequitur emotional arguments to paint Levy's position, and sex robots, at the epitome of evil.

Her first claim was that sex robots made to look like children would encourage actual pedophilia. In that she may be right, although her reasoning was flawed. She claimed that pedophilia is about "politics," not sex. However, for the sick minds who seek out children for sexual gratification dominating a weaker human is part of their degenerate pleasure.

Then Richardson went off on a wild, preposterous tangent, saying that black slave robots could be created, thus facilitating racism.

By the time she was done, she had the hapless Levy defending himself from charges of advocating for the facilitation of pedophilia, the subjugation of women, and racism.

All of which was nonsense, of course.

To suggest that sex robots would advance those evils is no more logical than to suggest we should ban toy puppies because it might encourage depraved sadists who like torturing animals. 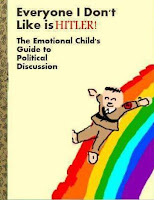 Still, Richardson had equated being pro sex robot to being pro slavery, misogyny, racism, and pedophilia. It was like the joke that in political criticism, everyone you don't like is Hitler, which was pretty much the only disparaging analogy she left out. But why not go full Adolf?  By bringing in something as extreme as Hitler,  it shows how wrong Richardson is in her arguments.

What if an antisemite wants to make robot Jews and exterminate them? Wouldn't that be a terrible thing?  Well, yes it would.  But speaking with the advantage of hindsight, if the technology had existed, would it not have been immeasurably better if Hitler had made robot Jews and burned them in the ovens of Auschwitz instead of actual humans?! And wouldn't it have been better if robots had been used in the US south to do menial labor instead of plundering Africa for human beings who were enslaved, murdered, and abused for generations?

By Ms Richardson's reasoning, it could just as easily be argued that by wanting to ban sex robots, she's for genocide, the exploitation of women, slavery, and the sexual abuse of the real children that pedophiles will use instead of robots. Beyond that, by implying that it's only straight men who would use them, it could also be argued that her anti sex robot stance is homophobic and sexist. All of which would be as inaccurate as Ms Richardson's charges against Mr. Levy.

Ms Richardson did have a number of fans in the Ideacity audience. Her talking points got enthusiastic applause on quite a few occasions. But in scanning the crowd, I noticed that the people cheering for Richardson were all women of an identical age group and physical type.

Which is understandable. In a world where sexbots are just science fiction, heterosexual, middle aged, unsexy women can rely on some attention from middle aged men without better alternatives available to them. But if there were sex robots, they would be in about as much demand as a VCR in a world with blu-ray, PVRs, and video streaming. Another consideration that was absent from the debate is that one of the disparities of the male/female dynamic is that women seem to value and require emotion more than men.

Regardless of the unbalanced way the great sex robot debate at Ideacity played out,  it did stimulate some fascinating considerations that weren't discussed.  If the technology advances to the point of them being possible, then realistic cybernetic sex robots will get made, for a simple, obvious reason. They will generate huge revenues.

Demand drives commerce, and there are few things more always in demand than sex.

The commercial potential of sexbots wasn't discussed at the debate, but it's one of the most fascinating considerations about the subject.

One thing that's a certainty is that if sex robots become reality, then celebrities will be licensing their likenesses for them. It's hard to imagine that if the technology for one existed, there wouldn't be Pam Anderson and Kim Kardashian sexbots, advertised as being as good as the real thing. Possibly better, because with a cybernetic Kardashian, it would only talk if you want it to.

But this concept opens the door to some really intriguing possibilities. There could be sexbots of anyone from history!

I could have a foursome with Raquel Welch circa 1968, a 1930 Greta Garbo, and Pam Grier as she looked in 1973. And what woman wouldn't want Cary Grant and Sean Connery simultaneously at her command. Gay men could have threesomes with James Dean and Monty Cliff.  And what lesbian would pass the chance to find herself scissoring with Katherine Hepburn while Audrey Hepburn sits on her face?  The options are endless.

There is a downside to sex robots in the potential damage it could do to human productivity and creativity.  When people can have their fantasies fulfilled on demand, they're going to spend a lot more time fulfilling those fantasies instead of doing other things.

After all, if the technology currently existed where I had the choice between writing and getting a massage from robot Marilyn Monroe while being fellated by robot Halle Berry, you wouldn't be reading any of this now.

You miss the unspoken agenda here. People such as Ms Richardson who form organizations such as the Campaign Against Sex Robots are uniformly and relentlessly leftist in their beliefs, are they not?

Accordingly, their rabid opposition to non-extant sex robots must be because that the figmented automatons are not currently unionized and their hypothetical projected existence must be a futuristic anti-labour, alt-right plot by patriarchal males yet to be born.

Get those not yet extant robots to sign union cards and watch the Campaign Against Sex Robots switch gears to advocate for future government subsidies to allow the poor to purchase them, programs to require safe sex robot sites to be established in all city centres as a form of sexual deprivation harm reduction, and free distribution of sex robots to homeless men on the streets who will not feel comfortable sharing the models available to the homeless in shelters.

Mind you, not yet enacted government subsidies to Samsung, et al, to manufacture them, sure to be imposed robotic environmental disposal fees and sex robot taxes by Toronto's city council (on all sex robots brought into Toronto by those living in the suburbs in order to to fund Toronto's transit system) will ensure the cost of the damn things will exceed the capacity of the working (sex starved) man to afford one. Did I mention the futuristic demands by the left to demand the right of undocumented sex robots to vote.

At least there is little chance Donald Trump will ban them.