Stephen L. Carter: The true authoritarians are on campus, not in the White House 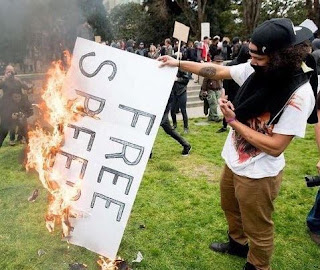 ...Students who try to shut down debate are not junior Nazis or proto-Stalins. If they were, I would be content to say that their antics will wind up on the proverbial ash heap of history. Alas, the downshouters represent something more insidious. They are, I am sorry to say, Marcusians. A half-century-old contagion has returned.

The German-born Herbert Marcuse was a brilliant and controversial philosopher whose writing became almost a sacred text for new-left intellectuals of the 1960s and 1970s. Nowadays, his best-known work is the essay “Repressive Tolerance.” There he sets out the argument that the downshouters are putting into practice.

For Marcuse, the fact that liberal democracies made tolerance an absolute virtue posed a problem. If society includes two groups, one powerful and one weak, then tolerating the ideas of both will mean that the voice and influence of the strong will always be greater. To treat the arguments of both sides with equal respect “mainly serves the protection and preservation of a repressive society.” That is why, for Marcuse, tolerance is antithetical to genuine democracy and thus “repressive.”

He proposes that we practice what he calls a “liberating” or “discriminating” tolerance. He is quite clear about what he means: “tolerance against movements from the Right, and tolerance of movements from the Left.” Otherwise the majority, even if deluded by false consciousness, will always beat back efforts at necessary change. The only way to build a “subversive majority,” he writes, is to refuse to give ear to those on the wrong side. The wrong is specified only in part, but Marcuse has in mind particularly capitalism and inequality...
Posted by Richard K at 12:30 PM