Denounce Trump or you're a racist idiot! 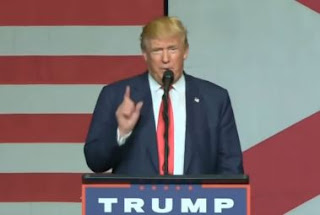 No, of course that's nonsense.

But I'm seeing a lot of that in the last 24 hours, since Trump announced a suspension on entry to the US from Iran, Iraq, Somalia, Syria, Libya, Sudan, and Yemen.

Personally, I think the way the travel ban was implemented could have been thought out better, and made more clear particularly in terms of people from those countries who are not US citizens but are already legal residents.  (UPDATE:  The White House has apparently come to understand that and has already issued clarifications.) But the policy of restricting travel from countries which house groups that are violently hostile to the US is not without logic or precedence.

One of my friends put up a post on facebook implying that unless I denounce Trump, I must be "a racist idiot." Here was my response (I've omitted some identifying stuff of the first few sentences and formatted it in paragraphs, but otherwise, this is it in its entirety):


Now if you want to rationally discuss his suspension of entry from those 7 Muslim majority countries, personally, I don't think it's a great idea.

I'd be more disposed towards a more, as the term is, "extreme vetting," rather than a blanket ban. But the policy isn't insane.

First of all, it's not a "Muslim ban" as there are about 43 Muslim-majority countries which aren't affected by this policy representing approximately 90% of the world's Muslim population.

However, it is demonstrably true that all of the 7 countries on the list are breeding grounds for terrorism which house numerous terrorist organizations and are rife with extremism and lots of people violently hostile to the United States.

It's also reasonable to assume that the President of the United States has access to information that the average person doesn't. Since Trump has publicly stated that he's going to take more aggressive action than the previous administration, you might consider the possibility that those hostile to the US would be planning some actions against the US, and this entry ban is a preemptive countermeasure. It's also possibly being taken in anticipation of measures that Trump has planned towards those countries but has not yet announced. That's a very definite possibility in the case of Iran in particular, and Iran has substantial influence in the other countries on the list.

And by the way, while there have been numerous precedents for this, Obama set one himself in 2011, with a 6-month entry ban on Iraqi refugees. http://thefederalist.com/.../the-obama-administration.../ .

Again, while I would not take the exact measures that Trump is, in practical terms, the US is at war with groups inside those countries, so as a matter of policy, it is not irrational to suspend entry from those places until, as Trump said, we figure out how to deal with it. And trying to use the "anyone who disagrees with me is a racist idiot" argument may play well with people who think inside the bubble, but it's just not carrying the weight it used to.