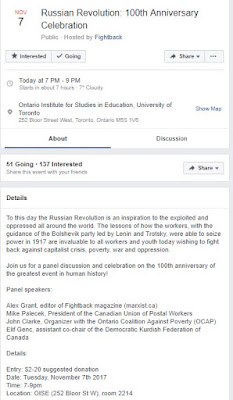 The Russian revolution of 1917 led to a communist dictatorship that murdered tens of millions of people. Vladimir Lenin, the leader of the post revolutionary Soviet Union, created the world's first concentration and death camp system for political prisoners.

The Soviet Union expanded its control over Eastern Europe for decades after the Second World War and in addition to millions upon millions of murders that they committed, hundreds of millions were deprived of basic freedoms and consigned to lifetimes of oppression.

When the Soviet Union finally fell, millions took to the streets to celebrate its death.

But at the Ontario Institute for Studies in Education, they plan to celebrate the beginnings of that empire of murder and fear. This should come as little surprise to those familiar with OISE. It's ostensibly the leading education institution for Ontario's public school teachers, but in practice, it operates as a Marxist indoctrination centre.

Among others, John Clarke, the leader of the Marxist gang of union-financed goons called the Ontario Coalition Against Poverty, and Mike Palecek, the Head Commissar of the Canadian Union of Postal Workers, will be at OISE tonight to hail the glorious revolution that redistributed wealth from the hands of the few into the hands of another few and stole liberty away from generations of Europeans.

At least they're open about what they want to inflict on us in Canada.