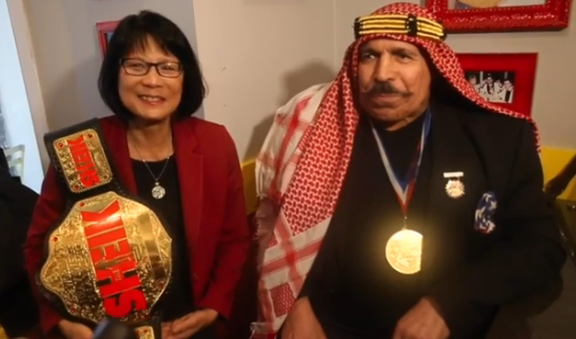 Still unable to articulate coherent policies, or for that matter a coherent sentence (if you don't believe me, check out the video at this link), Toronto mayoral candidate Olivia Chow has decided to scale down on the type of public figure with whom she will appear.

To her rescue came the Iron Sheik, a septuagenarian former bad guy pro-wrestler whose cognitive abilities have been decimated by years of drug abuse. Still, he was quite eloquent compared to Olivia Chow, with whom he held a press conference at a Fashion District sandwich shop in Toronto yesterday.

The Sheik was in town to promote a documentary about him that was made by local filmmakers. Toronto mayor Rob Ford declined to meet with the Sheik or attend the movie's premier. That perceived snub was the catalyst for a remarkable display of self-entitled stupidity in which one of the filmmakers went on a public rant about how it was Ford's "obligation" to attend and support their movie.

If Ford went to every local documentary premiere, he would have time for nothing else. But that is the mindset of the typical Chow voter: stupid, sanctimonious, entitled and clueless.

UPDATE: See also Olivia Chow dines with vulgar anti-Gay bigot and gets his endorsement
Posted by Richard K at 11:57 AM