...The Student School is an alternative secondary school that offers courses for students in grades 11 and 12. The school has a definite slant towards the far left, promoting ideals of “Social justice, equity, acceptance, respect, and participatory democracy”. There’s no equivalent school in Toronto for people with right-leaning politics.
Like many on the radical left, the Student School has taken a strong position against the Israeli state. They’ve aligned themselves with the controversial (some say anti-Semitic) group Students Against Israeli Apartheid, and High School Students Against Israeli Apartheid. The school’s position on Israel is so intense, there’s been at least one incident where an Israeli student felt unsafe and compelled to leave.
Each week the school’s students gather for a “General Council” meeting (that sounds a lot like the General Assemblies of the Occupy movement). At these meetings, students “vote and discuss school issues, students’ issues, activity motions, motions of solidarity, boycott proposals and much more”. From the above screenshot, it appears that they’ve recently voted ‘unanimously’ to attend this years protest against Barrick Gold....


Plus more on the idiots at The Student School HERE

Update: Oddball TDSB Trustee candidate John Furr has decided he's onboard with the antisemtic trope of Israel being an "Apartheid" state. Yeah, this John Furr. 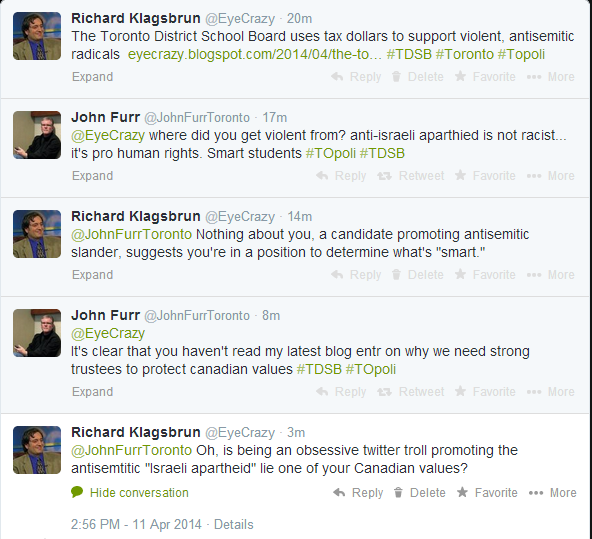 I got in on that one a bit at the end. He is a real peach. Pretends that only a tiny minority of bigots are opposed to nudity at Pride.